When I was a kid, my grandfather would rattle off obscure names of former Pittsburgh Steelers from the ’40s, ’50s and ’60s. These players obviously weren’t stars, but to him, they were favorites that he had a soft-spot in his heart for. 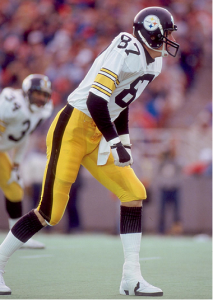 Willis “Weegie” Thompson played his college football at Florida St., before arriving in Pittsburgh as a fourth round pick in the 1984 NFL Draft.  During a three-year college career, Thompson caught just 41 passes for 711 yards and five touchdowns.

It also didn’t hurt that Thompson stood at 6′ 6″ and weighed 212 pounds–measurables that would equal the playing field for most unheralded college receivers looking to make it at the pro level.

Thompson was part of the same class that produced Louis Lipps. After a rookie season that included 17 receptions for 291 yards and three touchdowns, playing behind both Lipps and the legendary John Stallworth, it may have looked like the future was bright for the young Thompson.

Thompson went on to play just six seasons with the Steelers, before getting on with his life’s work following the 1989 Steelers story book season. As the Pittsburgh Post-Gazette pointed out in a story about Thompson in 2003, maybe if he had played 15 years later, he would have been utilized as more of a downfield weapon, instead of primarily as a blocker for the always conservative Chuck Noll. 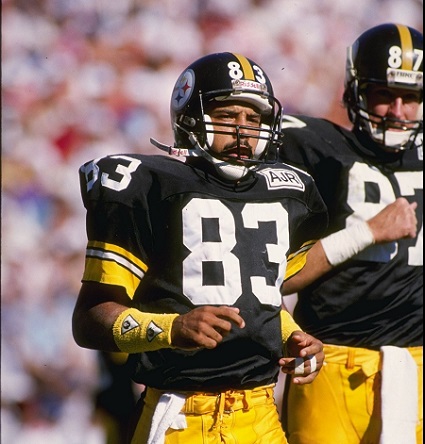 But as Thompson told the Pittsburgh Post-Gazette then, he had few regrets about his career:

I don’t dwell on it. I was proud to be a member of the Steelers and of the time I spent in Pittsburgh. I played hard and performed to the best of my abilities when I was there. I gave it my best and I’m pretty comfortable with that.

However, while Thompson had a rather obscure career that included just 79 receptions for 1,377 yards and 11 touchdowns, thanks to his abilities as a blocker, he was able to gain lasting respect from one of the all-time greats, Hall of Fame safety Ronnie Lott.

Thompson’s play during the Steelers’ famous upset victory over San Francisco in Week 7 of the 1984 season (the only loss by the eventual Super Bowl champion 49ers that year and perhaps Noll’s most impressive post-’70s regular season victory) is mentioned in a SFGate article about Lott from 2000.

What follows is a snippet of the article, along with a quote from Lott:

Call it respect–for yourself, for others. It had meaning to Lott. You earned his respect by playing hard and tough, and within the rules. He still fairly gushes when he talks about a journeyman Pittsburgh wide receiver named Weegie Thompson. In Thompson’s rookie season, 1984, the Steelers were the only team to beat the 49ers. One reason they did was by assigning Thompson to block Lott on every play.

“He blocked my butt all day–and fair,” Lott remembered. “Every play, he came after me. And I respect the hell out of Weegie Thompson to this day. He’s one of the toughest guys I ever played against.”

Some NFL players go on to have Hall of Fame careers (Lynn Swann and John Stallworth), some are borderline (Hines Ward). Others have good careers that may have been better in different eras or under different circumstances (Buddy Dial, Roy Jefferson and Louis Lipps), while some never reach their full potential (Santonio Holmes, Limas Sweed and maybe Martavis Bryant).

But there are countless NFL players who play for a while and end their careers with no legacy.

Weegie Thompson was that kind of football player, but he still left enough of an impression on fans and even peers playing for rivals to be proud of his time with the Steelers and the NFL.