The 2016 NFL Draft has arrived. Endless hours of dueling mock drafts between ESPN’s Mel Kipper and NFL Network’s Mike Maycock, speculation about trades, rumors about injury and/or off the field indiscretion all come down to the NFL’s made-for-TV spectacle that has grown to rival the Super Bowl.

Steelers Nation of course cares about one thing:

Mike Tomlin and Kevin Colbert on the NFL Draft

The 2016 NFL Draft promises to be a pivotal one in Pittsburgh Steelers history, simply because the Steelers are running short on time surround Ben Roethlisberger with enough quality players while he remains a Super Bowl viable quarterback. This was also true of the 2015 NFL Draft as it will be true of the 2017 NFL Draft.

Alas, you’ll find no such predictions here on Steel Curtain Rising. This site is (largely) written out of Buenos Aires where college football is scarce and, true be told, yours truly never followed it when I lived in the US. I don’t have draft-nick credentials and won’t disrespect my loyal readers by trying to fake it.

But we do understand the Steelers needs, hence, Steel Curtain Rising’s contribution to the Steelers Nation’s annual draft conversation comes in the form of our annual Steelers Draft Needs Matrix.

Every team goes into the NFL Draft looking to address various needs, but different philosophies guide each team. How Kevin Colbert and Mike Tomlin approach this question is somewhat of a mystery, but Steel Curtain Rising’s applies plain spoken logic to our Steelers Draft Needs Scale.

First, there are the urgent needs. For the Pittsburgh Steelers to legitimately contend for Lombardi Number 7 in 2016, the franchise must strengthen itself at cornerback, nose tackle/defensive tackle, and safety in the 2016 NFL Draft. Half a step down from that, we see that running back is an area of moderate-high need. (If reports out of Pittsburgh are a guide, Colbert and Tomlin feel differently.)

Below that, the Steelers have some issues at guard and defensive end in a middle tier that could bolster their Super Bowl chances by addressing in the draft.

After that, there are a whole host of needs that Steel Curtain Rising classifies as “Moderate Low” and those include tight end, quarterback, both inside linebacker and outside linebacker, offensive tackle and wide receiver.

How to break those ties? Well, the easy answer is by taking the stronger player on the board for the areas on the depth chart you’re looking to address. But that’s not always possible – what if two (or three) equally graded players are available.

That’s where the Steelers 2016 Draft Needs Matrix comes in.

The Pittsburgh Steelers 2016 Draft Needs Matrix is as follows: 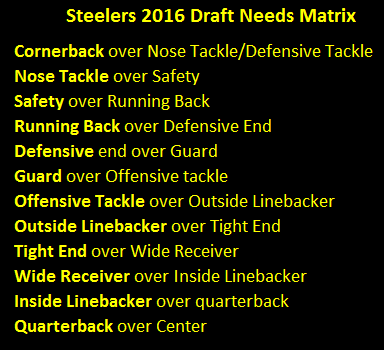 Cornerback takes priority over nose tackle/defensive tackle because William Gay gives the Steelers one proven player whereas Pittsburgh needs two (or three). Defensive tackle takes precedence over safety because Robert Golden is more of a proven commodity than Daniel McCullers, and because Shamarko Thomas and Ross Ventrone at least give the Steelers NFL-experienced bodies.

Safety trumps running back, because the Steelers immediate needs at running back are less acute. Running back edges out defensive end because Cameron Heyward and Stephon Tuitt are younger and their contract situations are more settled than those of Le’Veon Bell and DeAngelo Williams.

Defensive End is higher up on the pecking order than Guard because there’s a little more in the way of experience behind Cam and Stephon than there is behind David DeCastro and Ramon Foster. But that’s close.

But some Steelers 2016 depth chart areas rated “Moderate-Low” are more equal than others, to borrow a phrase from George Orwell’s Animal Farm. Offensive tackle takes top billing in this tier, simply because there’s less depth and less proven talent among the starters. Outside linebacker comes next, simply because Jarvis Jones is both unproven and in the final year of his contract, while James Harrison will turn 39.

Tight End takes priority over wide receiver because there’s simply more proven and more youthful depth at wide out. Wide out trumps Inside Linebacker because of the uncertainty of Martavis Bryant’s future and perhaps Antonio Brown’s contract, whereas it is easy to assume that the Steelers will have a competent backup for Lawrence Timmons and Ryan Shazier in 2017.

Quarterback edges out Center, simply because the Steelers only have Landry Jones right now, while the Steelers have both Maurkice Pouncey and Cody Wallace.

There you have it Steelers Nation! Should your own analysis differ from what you see here, by all means feel free to join in the debate in the comments section.