How long does it take to grade an NFL Draft class? Google “2016 NFL Draft Grades” you’ll get 3,980,000 returns. OK, the 2016 NFL Draft hasn’t generated 4 million report cards, but there’s no shortage of grading done on a draft that’s less than a week old. 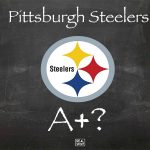 Were Chuck Noll still with us, he would applaud. 5 Years might seem a little too long to wait, and 5 years certainly is an eternity a Twitterized, update by the second sports landscape. But think about it. IT makes a lot of sense, and the Steelers 2011 Draft Class provides a compelling example.

Why Wait 5 Years to Evaluate a Draft?

Let’s concede that 5 years IS a long time to wait to grade an NFL draft class, especially when you consider that the average pro football career is 4 years. But, as your statistics teacher told you (or will tell you) the mean gives you the balance point of your data set.

That also means that by year five you’re going to a meaningful body of work, or “data set” if you will, on everyone from that class. Guys who hung on simply because they were playing on inexpensive rookie contracts will be out of the league by then.

Others who were late bloomers (think Brett Keisel) will have established themselves. Players who might not have been a good fit for the team the drafted them will have found success elsewhere (think James Farrior and Ryan Mundy).

A look at the evolution of the Steelers 2011 Draft Class shows why prudent draft evaluations come after 5 years.

Drafting second to last in each round is the price you pay for making it to the Super Bowl and losing, but despite that the Steelers 2011 Draft was well received. Kevin Colbert labled the Steelers first pick as a historic day for the franchise. The Steelers met their needs, at least theoretically.

That’s no surprise, as Aaron Smith started the season, Brett Keisel was still in his prime, and Ziggy Hood had finished 2010 with a bang (yes, its true, people forget that.) Marcus Gilbert got a baptism by fire when Willie Colon was lost for the season and won the rookie of the year award. And Cortez Allen saw spot duty, but showed a lot of promising signs.

In 2012 Steelers Nation got to see more. Chris Carter got some starts while James Harrison was out, but could not hold off Jason Worilds. Cam Heyward got playing time but still didn’t start. Baron Batch returned from injury, but wasn’t the same (or the flashes he’d shown prior to tearing his ACL weren’t just that, flashes.) Marcus Gilbert started the season, but was out most of the year injured.

After two years, it looked like some meaningful conclusions on the Steelers 2011 were Possible. But were they…?

Evaluation of Cameron Heyward was mixed. Some pointed to per-snap production stats that were far better than Ziggy Hood’s. Others concluded his failure to start was a warning sign of an impending bust. Some concluded that the Steelers decision to draft Mike Adams might spell trouble for Marcus Gilbert. Curtis Brown hadn’t shown anything when he got on the field.

Cam Heyward emerged as the stud that the Steelers drafted him to be, relegating Ziggy Hood to the bench. Marcus Gilbert’s start to the season was shaky, but by season’s end he had the starting job, and a new contract locked down. Cortez Allen got injured, and struggled a little, but finished strong. Chris Carter showed he wasn’t the answer, in contrast, and Baron Batch never made the final roster.

Cameron Heyward continued to terrorize offenses, while Marcus Gilbert quietly settled into becoming one of the better right tackles in the league. Curtis Brown and Baron Batch were out of football (as was Keith Williams). Chris Carter was bouncing around the league.

The Steelers thought enough of his first three seasons of production and his work in preseason to extend his contract. And based on past experience with Steelers DB’s, Cortez Allen looked poised to have a breakout year. Except he didn’t. He struggled in coverage. He lost his starting job, then was benched, then went to IR.

A Cortez Allen rebound could transform and “OK” grade on the Steelers 2011 Draft to a good or even great one. Alas, Cortez Allen didn’t rebound. Either because of injury or aptitude, he didn’t play outside of the Steelers opener vs. New England and went on IR earlier in the year. Last month the Steelers cut Cortez Allen.

Waiting 5 years to grade an NFL Draft Class isn’t sexy and it won’t win you many page clicks. But if you really want a meaningful draft evaluation, then you really must way 5 years.