Coming to the Steelers as  their fourth round pick in the 1980 NFL Draft, Calvin Sweeney, a receiver out of USC, had to be at least a little conscious of the glass-ceiling at the position he would try to play professionally. 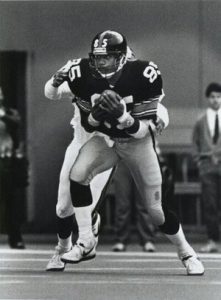 With Lynn Swann, a fellow USC graduate, and John Stallworth having long-since established themselves as one of the top-receiver duos in the NFL, just making the Steelers’ squad was going to be a difficult task.

But if the youngster did make Pittsburgh’s squad, at least he could  get in on the championship success that saw the organization win four Super Bowls in the previous six years, right?

Sadly, while Sweeney came to Pittsburgh already knowing he would be the low man on the receiver dept chart, he also arrived on the scene just as the Super Bowl days were coming to an end.

However, as Sweeney told the Steelers site, SteelerAddicts, in an interview from 2007, Pittsburgh was a class organization that quickly made a great impression on him, and even the superstars such as two-time Super Bowl MVP quarterback Terry Bradshaw were down-to-Earth and accommodating:

My rookie year, the team was leaving for a preseason game. I had surgery on my foot and Terry Bradshaw asked me what are you going to do this weekend? I told him I would stay around St. Vincent. He knew my girlfriend was in Arlington, Virginia visiting her parents. He told me to take his car and go see her. I didn’t know anything about Arlington and he told me it was just a few hours down the road. He just got a new Lincoln Continental. He gave me the keys and I went to see my girlfriend. That was my first impression. He was such a good guy. Everyone on the team were great guys.

Speaking of class, there was nobody classier than Art Rooney Sr., the team founder, who made an impression on the rookie Sweeney right away.

As Sweeney explained in an interview he did with Pittsburgh Sports Daily Bulletin in 2012:

When Art Rooney Sr. brought the four of us  top picks in to meet the press and coaches. He came up to me and asked me my name. I told him “Calvin”. He said, ‘Calvin?’ That’s not a good Irish name. I’ll call you Mikey.’ And he never called me Calvin again. He’d come up to me in practice and say, ‘Hey Mikey–how are you doing?’

In an eight-year career in Pittsburgh, Sweeney caught just 113 passes for 1,775 yards and seven touchdowns. However, in 1983, due to retirement (Swann hung up his cleats following the ’82 season) and injury (Stallworth only played in four games), Sweeney had a career-year, as he led the team in receptions (39), receiving yards (577) and touchdowns (five) while starting all 16 games.

Bradshaw had been out the entire ’83 season up to that point, recovering from offseason elbow surgery. However, in a Week 15 match-up against the Jets at Shea Stadium – in the last game at that historic venue – Terry Bradshaw made his regular season debut. After giving Pittsburgh a 7-0 lead thanks to a 17-yard touchdown pass to Gregg Garrity in the first quarter, Bradshaw put the Steelers ahead, 14-0, with a 10-yard strike to Sweeney in the second quarter.

I didn’t know if was [Bradshaw’s] final one then. We set up a play where I lined up close to Bennie Cunningham. Bradshaw came out of the pocket and just jumped and threw it and I caught it. He grabbed his elbow then and  tried to shake it off. We went to the sideline and he said I am through, my arm is killing me. We thought it would be a few weeks. Cliff Stoudt came in and played. Next thing I knew Brad said I can’t go anymore.

Sweeney would go on to play four more years and was out of football following the strike-shortened ’87 season.

As per his Pittsburgh Sports Daily Bulletin interview from 2012, Sweeney, 61, is working in management for UPS, a company he began with as a delivery driver, immediately after his playing days ended.

Calvin Sweeney may not have had a great career, but he certainly seemed to enjoy his time in Pittsburgh and in catching Terry Bradshaw’s last pass he played an under appreciated role in Steelers history. And he appears to embody the same class as the team founder who called him “Mikey” and the Hall of Fame quarterback who loaned him his new car and honored him with his final pass.