The Steelers 1971 draft class is perhaps a close second to the famed ’74 edition that produced four Hall of Famers. Jack Ham was the lone Hall of Fame player from ’71, but he was one of eight Super Bowl starters that came out of the class that also included Dwight White, Ernie Holmes, Mike Wagner, Gerry Mullins, Frank Lewis, and Larry Brown. 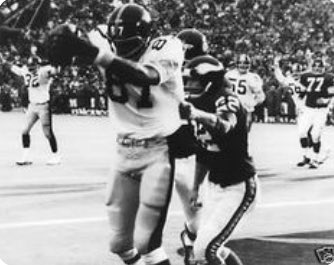 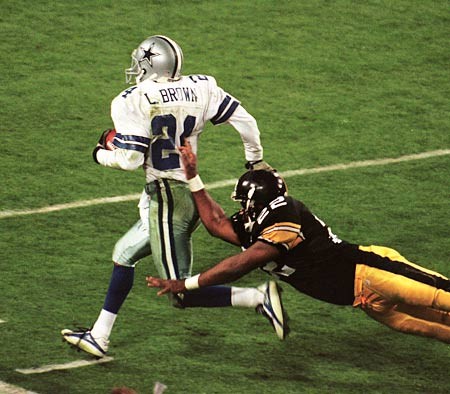 But the record must reflect that there is in fact another Larry Brown who actually HELPED  the Steelres win Super Bowls against the Cowboys. In-fact, of all the Steelers players who helped the team win four Super Bowls in six years in the 1970s, Chuck Noll’s Larry Brown is probably the most unheralded and certainly the most  underrated.

The Steelers drafted Brown with the first of four fifth round picks in ’71 as a tight end out of Kansas and he played tight end for the first six years of his career.

In Chuck Noll’s conservative and run-first offense of the early-to-mid ’70s, Brown’s main role was as a blocker. In-terms of receptions, he pulled in just 48 for 636 yards and five touchdowns.

During his days as a tight end, Brown earned his place in Steelers lore when he pulled in a six-yard touchdown pass from Terry Bradshaw with 3:38 remaining in the fourth quarter of Super Bowl IX to give Pittsburgh a 16-6 lead and all but clinch the franchise’s first NFL title.

But three seasons later, a knee injury would force Brown to turn in his No. 87 and switch to No. 79, as Noll wanted him to (at least temporarily) learn how to play tackle while he was still on the mend.

As Brown told Pittsburgh Sports Daily Bulletin in an interview from November of 2012, the move wasn’t so temporary, after all, but he credits it with extending his career:

In hindsight, it worked out well–it extended my career. The year I switched I had a knee injury I was still recovering from. I wasn’t able to do the running and cutting you needed to do to play tight end. That was anticipated by Chuck. We met in his office and he told me that because I couldn’t run due to the injury he was going to have me learn the tackle position. That once I got healthy he’d move me back to tight end. In the meantime, before that, they drafted Bennie Cunningham [in the first round of the 1976 NFL Draft] and signed Randy Grossman. They saw themselves as being in a good position at tight end and had great need at tackle at the same time, so they never moved me back. Then they traded away tackle Gordon Gravelle, so I stayed at the position for eight years and won two more Super Bowls!

Brown’s peers finally rewarded him with his first and only Pro Bowl honor in 1982 and he played another two seasons before calling it a career following the Steelers 1984 campaign.

Nine Hall of Famers came out of those ’70s Steelers teams, and if the late, great Chuck Noll had a vote for number 10, Brown would have been his choice.

Here is a quote from an NFL.com article from three years ago that lists Brown as one of the Steelers’ all-time most underrated players:

Chuck Noll once was asked this question: Of all the great players who contributed to those four Super Bowl championships during the 1970s, who among those not enshrined in the Pro Football Hall of Fame most deserves to be? Noll’s response was instant. Larry Brown.

That was quite the endorsement from a legendary coach who certainly knew great football players when he saw them.

As per his Pittsburgh Sports Daily Bulletin interview from 2012, Brown began a business partnership with former Steelers defensive back J.T. Thomas in the 1980s and the two have owned, among other things, multiple Applebees restaurants.

Regardless of his notoriety, not many players can say their careers were even close to Hall of Fame-worthy.

Larry Brown can, and that’s certainly something to be proud of.

7 thoughts on “Larry Brown the Pittsburgh Steelers Former Tackle, Tight End & Should Be Hall of Famer”