When David Little began his NFL career with the Pittsburgh Steelers in 1981, he arrived on the scene one year after his older brother, Larry Little, a future Hall of Fame guard who played 14 years for both the Chargers and Dolphins, ended his.

Speaking of future Hall of Famers, the Steelers still employed nine of them during Little’s rookie season. One of those future enshrines was Jack Lambert, Pittsburgh’s fierce, cranky and toothless middle linebacker. In only his eighth year in the NFL and still in his late-20s, the perennial Pro Bowler figured to rule the turf of old Three Rivers Stadium for many more years to come.

Even after the Steelers switched to a 3-4 alignment in 1982 (three down linemen, two outside linebackers and two inside linebackers), it didn’t create a starting spot for Little. Instead, veteran Loren Toews started every game at left inside linebacker in ’82 and again in 1983, while the consistent and reliable Lambert manned the right inside spot.

Things forever changed for Little in 1984, after the legendary Lambert suffered a turf toe injury and only started three games. 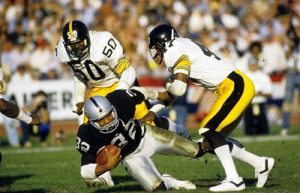 In Lambert’s place and along side Super Bowl veteran Robin Cole, Little started 13 games in ’84 and finished fourth on the team in tackles with 86, according to a UPI story published about Little in January of ’85, just prior to Pittsburgh’s match-up against the Dolphins for the right to go to Super Bowl XXIX.

“When you play Lambert’s position, your job is to make big plays,” Little told sports writer Dave Raffo, some 31 years ago.

In-fact, the Steelers defense made many big plays with Little starting in-place of Lambert, finishing fifth in both total yards and takeaways in ’84, as Pittsburgh advanced all the way to the AFC Championship Game.

As the story pointed out, Lambert was activated prior to the game against the Dolphins, but head coach Chuck Noll perhaps left no doubt as to who would start: “He’s a special player,” Noll said of Lambert. “But David Little has done an outstanding job in his place.”

Little started the conference title game in Miami, which turned out to be a 45-28 loss, and would continue to start for the remainder of his career, after Jack Lambert retired following the ’84 campaign.

The NFL really didn’t keep track of tackles during Little’s playing days, but according to an article from The Pittsburgh Press published in 1990, Little, who made his first Pro Bowl that season, was the same tackling machine as Lambert, as he led the team in that category five of the previous six seasons–including four in a row up to that point.

He’s been playing here for 10 years and playing well for 10 years,” He’s finally getting recognized, and everybody’s  really happy for David. I mean really, really happy.

Little played two more years and lasted through Bill Cowher‘s first season as head coach. However, despite the free agent departure of Hardy Nickerson, Cowher released Little during training camp in 1993 in-large part because of the development of second-year players Jerry Olsavsky and  Levon Kirkland.

Levon Kirkland, who much like Little, would go on to be a mainstay at the inside linebacker spot for many years. Because of his size (275 pounds) and almost unreal athleticism, Kirkland became a star at inside linebacker and made two Pro Bowls during his time with the Steelers.

David Little may not have been as famous as his older brother or the Hall of Fame legend he replaced at inside linebacker for the Steelers. In-fact, he probably didn’t even quite enjoy the notoriety of his successor Levon Kirkland.

But David Little upheld the standard of excellence that is the Steelers linebacker legacy and had the respect of his teammates and a career to be proud of.