That’s perhaps the only way to describe the Steelers‘ first two offensive series that paved the way for a 27-14 victory over the Saints in the third preseason game Friday night at the Superdome in New Orleans, Louisiana. 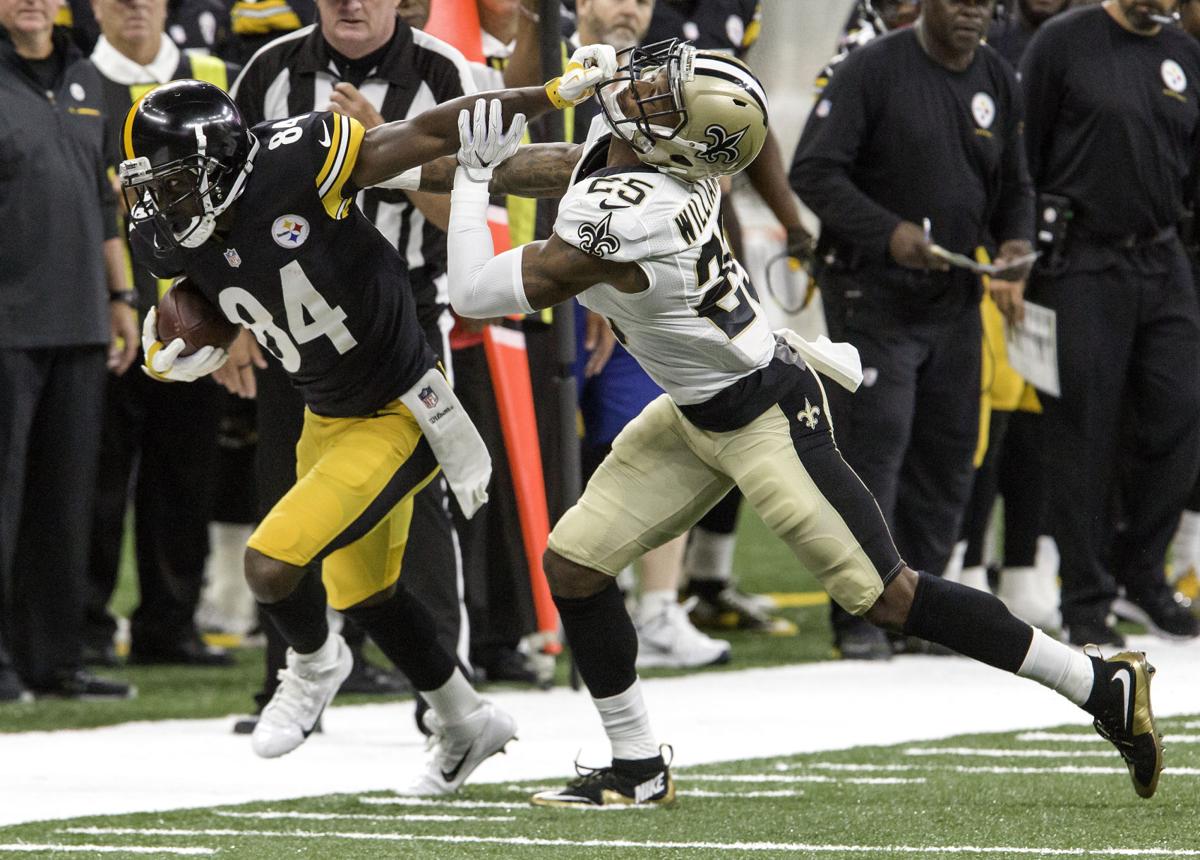 The reason for the masterful performance had to do with the entire offensive unit–including quarterback Ben Roethlisberger, receiver Antonio Brown and running backs Le’Veon Bell and DeAngelo Williams–playing together for the first time this preseason.

Ben Roethlisberger started the game and led the team on impressive back-to-back scoring drives in-which he completed 12 of 17 passes for 163 yards and two touchdowns.

The Steelers won the toss and almost effortlessly marched the football down the field on a 15-play, 74-yard drive that ended when Roethlisberger found tight end Jesse James wide open in the middle of the end zone for a five-yard touchdown.

The Steelers’ second offensive series was only four plays, but it was equally impressive, as it covered 79 yards and ended when Roethlisberger found Antonio Brown on a go route down the left sideline. Brown was in single coverage, and, as you might expect, it was a total mismatch.

Pittsburgh’s defense limited the Saints first-team offense led by Drew Brees  to seven points on three first half drives and was in the legendary quarterback’s face often enough to throw him off his game, as he completed nine of 12 passes for 78 yards and a touchdown before calling it a night.

Backup Landry Jones entered the game in the first quarter and, gifted with a full offensive arsenal outside of the departed Brown (who finished the night with four catches for 87 yards and a score), and Landry Jones looked like a completely different quarterback than the one who started the first two preseason games and was surrounded by mostly second and third-stringers.

In perhaps his best performance as a pro–preseason or regular season–Jones completed 19 of 22 passes for 206 yards and an eight-yard touchdown pass to Sammie Coates late in the first half to give Pittsburgh a 21-7 lead at intermission.

As for Le’Veon Bell and DeAngelo Williams, they combined for just 33 yards on 21 carries, but why run when you can pass as efficiently and fluidly as Pittsburgh did Friday night?

The Steelers quarterbacks consistently got rid of the ball quickly and certainly used their running backs out of the backfield. For example, while Le’Veon Bell didn’t have a big night carrying the ball, he caught five passes for 37 yards and looked about as elusive as he ever has, perhaps putting to bed the fears of him not being  fully healed from the torn MCL that ended his 2015 season.

Individual Steelers Performances vs. the Saints that Stood Out

On the individual performance front:

Wide receiver Markus Wheaton also made his preseason debut and caught two passes for 40 yards–including an impressive 36-yard catch in the second quarter in-which he out-fought the Saints defender for the ball.

Sammie Coates showed flashes for the first time this preseason, catching the only two passes  thrown his way for 66 yards and a touchdown. His second reception of the evening occurred in the third quarter and went for 58 yards, as he displayed the kind of downfield speed the Steelers are hoping becomes a regular occurrence, what with Martavis Bryant suspended for the year.

Steelers third round pick Javon Hargrave, the defensive end/nose tackle out of South Carolina State, looked very impressive, as he displayed a consistent pass-rush all night that frequently saw him chasing after the quarterback. He recorded the team’s only sack of the game and also batted down a pass while in pursuit of another one.

Eli Rogers, the UDFA wide receiver out of Louisville who has been turning heads the entire summer, only caught two passes for 17 yards but was in there on a number of snaps during Roethlisberger’s time in the game. Since the third preseason game is often referred to as a regular season dress-rehearsal, perhaps that was an indication that Pittsburgh plans on using Rogers as the slot receiver on a regular basis this year.

Jarvis Jones, the embattled first round pick from the 2013 NFL Draft, displayed a decent pass-rush as he beat his man several times and nearly came up with at least two sacks.

Inside linebacker Vince Williams, he of the new three-year contract, led the team in tackles with eight, and early in the fourth quarter–and just a few plays after being called for a questionable personal foul for leading with his helmet–made a huge stop on fourth and one.

Seventh round pick Tyler Matakevich, battling the likes of L.J. Fort for one of the reserve inside linebacker spots, only had one tackle, but he did come up with a late interception.

Perhaps the only bit of bad news to come out of Friday’s victory was an ankle injury suffered by star defensive end Cameron Heyward in the first half. Heyward walked off under his own power and went into the locker room for evaluation. In the second half, he was standing on the sidelines in street clothes and wearing a walking boot. Word is that Cam Heward has a high ankle sprain.

Next up for the Steelers is a trip to Carolina for their now annual preseason finale against the Panthers next Thursday night.