The lackluster loss to the Lions started the Steelers 2016 preseason campaign. Steelers Nation is already weighing poor performances from the likes of Alejandro Villanueva and Sammie Coates along with the poor tackling against solid play by the likes of Daryl Richardson, Landry Jones and Doran Grant.

And rightly so. Steelers preseason results seldom indicate much about the coming regular season, and that’s even when stars like Ben Roethlisberger, Antonio Brown, Le’Veon Bell and DeAngelo Williams are in the game.

But Steelers history also shows us that exceptions do exist. Click below for 5 times when preseason troubles signaled regular season Steelers stumbles.

Shamarko Thomas drops a should be interception in Steelers preseason loss to Lions; Photo Credit: Steelers.com

One surprise following the 1989 Steelers story book season was Chuck Noll’s decision, under pressure from the front office, to dismiss Tom Moore and hire Joe Walton as his offensive coordinator. On paper, the move looked smart. Walton’s offensive mind was well-regarded throughout the league.

In an August preseason game vs. the Washington Redskins, (yours truly’s first pro football game) the Steelers offense played dazed and confused, as Bubby Brister, Rick Strom and Randy Wright combined for 148 yards, most of which was gained during the game’s final two minutes. Afterwards, Chuck Noll opined that the only place the Steelers offense had to was up….

…The 1990 Steelers opened the season without scoring an offensive touchdown during September.
Although the offense did find some rhythm in the middle of 1990, missed opportunities, misused personnel and miscommunication ultimately characterized Joe Walton’s tenure as Steelers offensive coordinator.

Injuries, attitude and declining production prompted Pittsburgh to part ways with one-time franchise running back Barry Foster in the 1995 off season. The emergence of Bam Morris in 1994 made the Steelers decision much easier.

But the truth is, Bam Morris’ preseason performances were forgettable.

Statistics are not easily available from those preseason contests. The record shows that Bam Morris did run well vs. the Bills in the Steelers first outing, going 4 for 24, but he went 7 of 16 in the next.

The latter performance telegraphed Bam Morris’ lack luster start to the 1995 season, where he just barely averaged over 3 yards a carry during the seasons first seven games, before Bill Cowher benched him in favor of Erric Pegram, who was an unsung hero of the 1995 AFC Championship season. 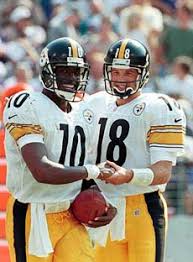 Bill Cowher hopped that one man would establish himself.

Unfortunately none did. Bill Cowher declared Jim Miller the starter just before the regular season, but clarified he was making a gut decision. Cowher didn’t trust his gut that much, as Jim Miller’s time as the Steelers starting quarterback lasted all of one half, as Cowher benched him in favor of Mike Tomczak.

While Tomczak led the 1996 Steelers to a 10-6 record and an AFC Central Championship, by the time December arrived it was clear that Tomczak wasn’t going to take the Steelers on a deep playoff run as Bill Cowher began to give Kordell Stewart time, who also wasn’t ready to be a signal caller.

John Jackson got blown away in the final preseason game of the 1988 season, infuriating Chuck Noll so much that the Emperor had to be talked out of cutting him. Fortunately Noll listened to his assistants, as John Jackson would be a mainstay at left tackle for the Steelers for the next decade.

But when John Jackson reached free agency at age 32 in 1997 and the San Diego Chargers offered to make Jackson the highest paid offensive lineman in the league, the Steelers said so long.

Unfortunately, none of them were up to the task. Bill Cowher tried various combinations at both tackle positions throughout the preseason as Jerome Bettis struggled to finding holes. Finally, Cowher moved Will Wolford to left tackle, slide Justin Strzelczyk to right tackle, and the offensive line was OK, until Strzelczyk got injured in a Monday night contest vs. the Kansas City Chiefs.

Jamain Stephens, 1996’s first round draft pick, finally got his chance to start, but the image of Bettis lighting into Stephens for not blocking well enough is the enduring memory of his tenure at right tackle.

It wouldn’t be until 2000 that the Steelers restored stability to left tackle, and their entire offensive line, but the troubles the Steelers experienced during their 1998 preseason campaign foreshadowed it all.

Look at the Steelers preseason results from 2007 to 2012 and there’s one constant X-1. The Steelers never lost more than a single game in preseason, irrespective if they finished 8-8 and out of the playoffs or playing in the Super Bowl.

For the first time in the Mike Tomlin era and the first time since Bill Cowher’s final season, the Steelers laid a goose egg in preseason. Commentator’s cautioned “Its only preseason” and Mike Tomlin explained the losses away, indicating that the men largely responsible for those losing efforts would find themselves on the waiver wire.

Depth that injuries to the starting running back, the two chief backup running backs, two starting tight ends, starting center, starting cornerback, and starting inside linebacker would test to the limit. The end result was the Steelers 0-4 start after an embarrassing loss in London to the Vikings.

In 2014 and 2015 the Steelers went 1-3 and 1-4 in the preseason, yet finished in the playoffs both times, so the “its only preseason” credo held true then. But 2013 was one year when piss-poor preseason performance signaled real trouble, at least at the start of the season.