As a 19-year old in the summer of 1991, I was really proud of myself for predicting the Redskins would be pretty darn good in the upcoming regular season. Washington had it all, from a dominant defense, a great offensive line, prolific receivers —The Posse–and a solid rushing attack.

Little did I know how good the ’91 Redskins would be; they were so good, they averaged over 30 points a game and limited their opponents to 14, as they jumped out to an 11-0 start and finished with a 14-2 record, before trouncing every opponent in the postseason–including a whitewashing of the Buffalo Bills in Super Bowl XXVI. 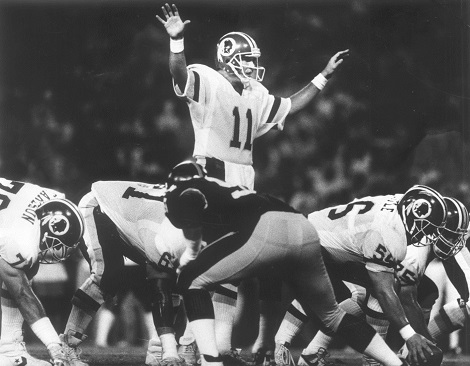 Mark Rypien prepares to call signals against Steelers. Photo Credit: Bruce Parker, Richmond Times-DispatchHowever, it was quite evident right away, what kind of day it would be for the home team. On the Redskins’ third offensive play of the game, quarterback Mark Rypien connected on a 63-yard pass to legendary receiver Art Monk. Moments later, running back Gerald Riggs scored on a one-yard touchdown, and just like that, the rout was on.

Washington’s defense sacked Steelers  quarterback Neil O’Donnell five times and prevented the offense from crossing midfield in every drive but two until the fourth quarter.

Believe it or not, my irrational heart became filled with all sorts of crazy fantasies, when O’Donnell connected on two fourth quarter touchdown passes–a five-yarder to tight end Adrian Cooper and a 40-yard strike to Dwight Stone–to pull Pittsburgh to within 13 points.

But, as if they were simply toying with the folks at Three Rivers, the Redskins quickly reestablished that 27-point bulge, when Rypien hit receivers Gary Clark and Ricky Sanders for scores 49 and 40 yards, respectively, to make the final score 41-14 and improve their record to 11-0.

Growing up in the ’80s, I unfortunately witnessed a lot of lopsided losses by the home team–including a 51-0 blowout at the hands of the Browns at Three Rivers Stadium just two years earlier–but that day against Washington was the first time I could recall feeling the Steelers simply didn’t belong on the same field as their opponent.

“They were the best team we’ve played by far,” said legendary head coach Chuck Noll, courtesy of the Washington Post. “We didn’t make first downs in the first half and couldn’t get them off the field. That was great execution on their part. When we backed off, they went in front of us. When we came up, they went over us.”

For  the day, the Redskins totaled 462 yards of offense–including 365 through the air. The magnificent receiving trio of Art Monk, Gary Clark and Ricky Sanders (The Posse) was the recipient of 292 of those passing yards.

Just how bad had things gotten for the once-proud Steelers franchise? The Redskins didn’t actually mean to score that final touchdown, and head coach Joe Gibbs felt bad about running up the score:

“That was not an intentional thing,” said Gibbs of the touchdown to Sanders. “If there’s anybody around I respect in the coaching profession, I’d like to be Chuck [Noll]. So I felt kind of bad. He’s got great pride and great poise and he said, ‘Hey, don’t worry about that.'”

Fair enough. But the 91’ Redskins victory over the Steelers gave Joe Gibbs a 3-0 record over Chuck Noll.