If the scribes of Steelers Nation are to be believed, DeAngelo Williams’ teammates serenaded him with “Happy Birthday” prior to every practice this summer. And so they should. Sightings of 33 year old running backs are almost as rare as sightings of blue whales.

Yet, for the second consecutive season, DeAngelo Williams will lineup behind Ben Roethlisberger as the Steelers starting running back, thanks to another suspension to Le’Veon Bell. That presents an interesting challenge to conventional wisdom.

What is DeAngelo Williams 2016 outlook? The statistics might surprise you…

In examining the potential impact of Le’Veon Bell’s suspension on the Steelers Lombardi hopes, this Steel Curtain Rising offered this caution:

DeAngelo Williams performed tremendously in 2015. Credit Colbert for another masterful free agent signing. But Williams will be 33 and skill-position players at that age often suffer sharp season-to-season drop offs.

It makes perfect sense. Advanced training methods may allow football players to continue to perform at high levels later into their 30’s, but the sight of an over 30 player “getting old fast” from one season to the next remains quite common. Think of Hines Ward. Had the Steelers won Super Bowl XLV, Hines Ward probably would have earned his second Super Bowl MVP.

So it would seem that DeAngelo Williams faces the same danger. The logic is flawless, isn’t it?

So just how much does the performance of NFL running backs drop off after age 33? And what do those tendencies tell us about DeAngelo William’s prospects for 2016? Let’s take a look.

This is a difficult question to answer. Not surprisingly, there are not a ton of NFL running backs who’ve played into their mid-30’s, and there’s no easy way to identify them. However, Steel Curtain Rising has compiled data on 11 NFL running backs who played until or beyond age 33.

All statistics come from Pro Football Reference. Running backs were selected simply by going down PFR’s list of all time NFL rushers, and looking to see how long they played. To qualify for the list, a running back had to log at least 100 carries at or after age 33. Some players like Fred Taylor barely made the list. In contrast, John Riggins rushed the ball more than a 1000 times after turning 33.

The first graphic gives us an idea of the career performance of the 33 rushers club. Over half of the players are NFL Hall of Famers including Walter Payton, Emmitt Smith, Tony Dorsett and Steelers Nation’s Jerome Bettis, which should be no surprise as longevity is part of greatness.

First, he has a lot fewer carries seems to do more with less, having a better career rushing average than any of the 11 players had over the span of their careers. However, the graphic above comprises data from the entire careers of these 11 running backs? How does DeAngelo Williams stack up vs. these Elite 11 before they turned 33? 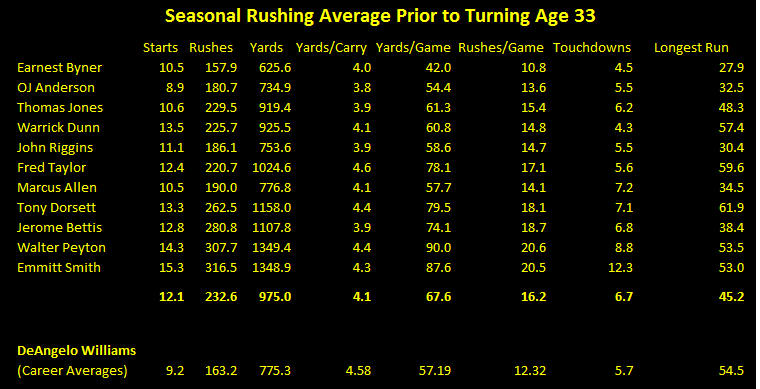 The answer is, DeAngelo Williams career still stacks up well. The “mean of the means” the aggregate rushing yards per carry is unchanged for the target group of runners. In fact, there’s very little change in performance between how these Elite 11 rushed before age 33 and their overall career averages.

Maybe. Maybe not. All of these players logged the bulk of their snaps before age 33, and even Father Time is struggling to combat the weight of those cumulative performances.

So what happened after these Elite 11 turned 33? Let’s take a look.

Not surprisingly, the numbers are down across the board. The average longest run drops to from 45 yards to 26 yards, proving that even these Elite 11 lost a step as they got older. Everyone’s yards per-carry dropped below four yards. However, passing 33 was hardly a death sentence for these players. O.J. Anderson won a Super Bowl MVP award at age 34 as did John Riggins at age 33.

Here the numbers show us something interesting, and encouraging for DeAngelo Williams.

The running backs comprising our Elite 11 sample did suffer a dip in performance after turning age 33, but the fall off was far from dramatic. In fact, Warrick Dunn, Fred Taylor, O.J. Anderson and Earnest Byner actually saw their rushing averages increase in the first season following their 33rd birthday. Overall, the drop off in production from age 32 to age 33 was slight.

All of that represents good news for DeAngelo Williams 2016 outlook.

If you apply the average drop off between age 32 and age 33 by our Elite 11 to DeAngelo William’s career averages, you’ll see that statics show he should only drop off .07 yards per carry, and rush the ball about 2 times less per game. His projected long run for the season should be 47 yards, down from his career average of 54.

And if statics are any guide, there’s more good news for DeAngelo Williams.

Looking at average cumulative performance before and after age 33, we see drop offs almost across the board. However, we can see that players like Marcus Allen’s decline was far less dramatic than the rest of his peers.

Indeed, Marcus Allen rushed an average of 188 times a season in his career, which is below the Elite 11 average of 232 times per season. DeAngelo Williams has averaged 163 carries per season, lower than any other player in the Elite 11 Earnest Byner.

All of that suggests that less wear and tear for DeAngelo Williams should potentially allow him to continue to run strong in 2016 and beyond.