What a way to start the season. The Pittsburgh Steelers traveled to FedEx Field and earned their first opening day win on the road since taking out the Houston Texans in 2008, as they defeated the Washington Redskins 38-16. 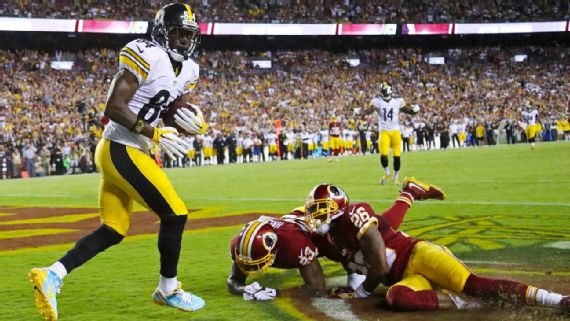 As we do after every Steelers win, we invite you, the citizens of Steelers Nation to vote gameball winners for all of the Steelers whom you think deserve one.

Leading the ballot positioning are Ben Roethlisberger, Antonio Brown, DeAngelo Williams and Ryan Shazier to no one’s great surprise. All four had phenominal performances against the Redskins. Ben Roethlisberger had 300 yards passing 3 touchdowns, and looked like, well Ben, making something out of nothing.

Of course it makes it easier when you have Antonio Brown to throw to, who is playing so well he looks like he could probably catch touchdowns with his right arm tied behind his back. DeAngelo Williams imposed his will on the Redskins. Not bad for a 33 year old. And Ryan Shazier showed again that he is capable of making game-changing splash plays.

After that, the next four ballot slots go to Eli Rogers, who made a strong NFL debut, despite contributing to Ben Roethlisberger’s lone interception. Lawrence Timmons simply led the team in tackles and was generally all over the field – when have we not said that since 2011?

While Jesse James isn’t quite making Steelers Nation forget Heath Miller, he did make a solid first start. Sammie Coates made a couple of key catches, while Michael Mitchell did was a safety is supposed to do – he kept the recievers in front of him, and laid in the wood after the catch.

If you think that there’s a Steeler that deserves a game ball for his performance tonight that isn’t on the ballot, then simply write his name in. Better yet, leave a comment stating your case. Cases are to be made for James Harrison, Robert Golden and perhaps any number of the Steelers offensive lineman.