Le’Veon Bell returns to action today for the Steelers in their Sunday Night Football matchup vs the Chiefs. While Steelers Nation rightly celebrates Le’Veon Bell’s return, asking, “What is Le’Veon Bell’s shelf life” is a fair question, given the ever shortening careers of NFL running backs and Bell’s own injury history.

A look at the history of Steelers running back durability offers a mix of both promising and discouraging insights….

…Click on the links below or just scroll down.

Prelude: Could the Steelers have Prevented Le’Veon Bell’s 2015 Injury?

Prelude: Today’s prelude borrows DC Comics’ parallel universe concept for a quick visit to Earth 2, where Steelers history has evolved quite similarly to our own, albeit with a few twists….

Le’Veon Bell is simply on fire. In the touchdown drive alone, Bell ripped off runs of 7, 27, and 11 yards, as Bell is taking control of the game in fashion that’s worthy of Franco Harris or Jerome Bettis.

During the past offseason season the Steelers exited their comfort zone and hired Robert Morris statistics professor Jonathan D. Stutts to assist with personnel assessments and game day strategy. As soon as Bell scores the touchdown, Stutts slides next to Hoak in the coaches box and instructs: “Tell Todd that Le’Veon needs to come out of the game… He’s just crossed the 21 touch threshold….”

The Steelers win a “closer than it should have been” matchup, and Le’Veon Bell has just taken over his first game in the same fashion as the great ones.

Back to reality. This never happened. During his breakout 2014 season, the Steelers never attempted to limit Bell’s carry count, even when Blount was still on the team. And Bell’s success in the real game against the Tennessee Titans shows show why.

But this brief bout with alternative reality helps frame the paradox that comes with the rise of saber metrics, “Money Ball” approaches to the NFL and, along those lines, it also illuminates the hubris afflicting the so-called “educated fans” in the information age.

Everyone knows that the Pittsburgh Steelers found a special player in the second round of the 2013 NFL Draft when they picked Le’Veon Bell. Bell is a true double threat who burns opposing defenses both on the ground and through the air.

But for Bell to accomplish that revival, he must first stay healthy.

With that in mind, a year ago this site called for DeAngelo Williams to continue to get carries for the sake prolonging Le’Veon Bell’s career. A long look at the history of the Steelers leading running backs from 1972 onward led to these seemingly wise words of “advice” for the Steelers brain trust:

…But to change that, Bell must prove to be durable. And even though he missed the first two games of the season, Bell’s work load for the 2015 season projects out 385 touches of the ball. That puts him over the magic number of 350, which number crunchers have pegged as point of no return for most NFL running backs. (You can find a full, albeit flawed, discussion of running back’s durability here.) The Steelers can reduce that load by giving DeAngelo Williams 5 carries a game.

Ah, there we have it! Meet the 21st century’s educated football fan, spreadsheet in hand!

The idea makes/made sense on paper, but there several problems arise when you try to put it into practice. Keeping a player under 350 touches per-season means limiting him to an average of 21 touches per game or less. It works fine in theory, but the real Steelers-Titans game of 2014 illustrates the complications coaches face in trying to put that into practice.

And yet, there’s another, more disturbing point, that further number crunching reveals: that by the time the plea to give DeAngelo Williams 5 carries a game was made it might have been too late….

Relation of Injury to Workloads of Steelers Franchise Running Backs

The Pittsburgh Steelers have rushed for more yards than any other team since the NFL merger. That’s a point of pride in Pittsburgh, as it should be. But it also gives us a deep trove of rushing data for analysis. In looking at the careers of Franco Harris, Barry Foster, Jerome Bettis, Willie Parker, Rashard Mendenhall and Le’Veon simultaneously, two numbers pop out: 369 and 47%.

Here’s what the full set of numbers looks like: 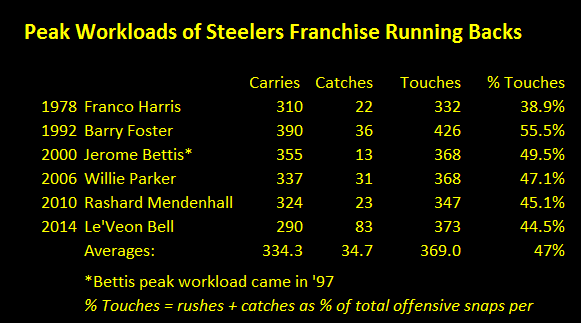 With two exceptions the rows above correspond to the peak workloads of the Steelers running backs in question. Franco Harris highest touch total actually came in 1983, his last with the team, but that total was 313 and his percentage of the team’s total touches in 1983 was actually smaller, coming in at just over 37%. For that reason, we’re focusing on Franco Harris’s 1978 season, where he had his heaviest workload, in terms of carries. Jerome Bettis is another outliner, which we’ll discuss later.

With the exception of Franco Harris, each of the players suffered career-altering injuries in the seasons that followed their peak workloads.

In 2001, Jerome Bettis looked to be having a career year, until an injury until a week 11 injury all but ended his season. Bettis bounced back, but within a year, naysayers like Mike Pruista started beating the drum for the Steelers to get off the Bus. Bettis of course proved them wrong, but he was never a season-long, full time starter again.

Willie Parker followed up his 2006 season with a fabulous 2007 season that tragically ended with a broken leg in week 15 of 2007. Parker played two more seasons, but saw his production decline in each and was out of football after that.

Ditto Mendenhall. Mendenhall 2011 rushing average was actually higher than his 2010 average, and the arrow was pointing up as the playoffs approached but Mendenhall tore his ACL in Steelers 2011 season finale against the Browns. Le’Veon Bell of course was playing gang busters during 2015, only to tear his MCL vs. the Bengals.

Le’Veon Bell’s case exemplifies that. Even if his collision injury against the Bengals would have taken place on the first carry of his rookie year, Bell probably would have torn his MCL just as badly as he did in week 7 of his 3rd year.

But if these numbers fail to prove anything in a strict statistical sense, they do reveal one clear tendencies:

That is, unless you’re a Steelers running back named Franco Harris or Jerome Bettis.

Franco and the Bus, Hall of Famers and Outliers

Does that mean that Le’Veon Bell chances for a true comeback leading to a long career are doomed? To answer that, let’s look at the two outliers in this study are Franco Harris and Jerome Bettis.

Franco Harris presents the most tantalizing example, because he never suffered a serious injury in his career. And there’s a good reason for that, but probably not one that is useful to Le’Veon Bell.

Likewise, Franco never touched ball on more than 41% of the Steelers offensive snaps on a season-by-season basis, and Franco’s career average seasonal touch percentage was 35%, almost 10 points below the percentages of Foster, Bettis, Parker, Mendenhall and Bell posted in their full seasons as starter.

There’s no secret behind this. Franco Harris actually played as a fullback in a two back offense were both backs got carries. Two back offenses are only slightly more common than Haley’s Comet sightings in today’s NFL, and two man backfields where both backs get significant carries are rarer than unicorns.

Data taken from Jerome Bettis career, however is a little more hopeful.

As more astute fans have probably already noticed, Bettis peak season, in terms of work load, did not come in 2000, but rather in 1997 where he rushed for a career high 375 carries, and had a career high 390 touches, leading the Bus to carry the ball on 47% of the Steelers touches, which is a hair below his career high of 49%. And you know what?

Yes, his yards-per average did drop, but that had everything to do with rushing behind some piss-poor Pittsburgh offensive lines in 1998 and 1999 than his 1997 workload.

It is not a stretch to say Le’Veon Bell has Hall of Fame level talent. Will his health hold up long enough to transform that talent into a Hall of Fame career? Well, if the limited sample that he presented in preseason is any indication, the Le’Veon Bell’s latest injury hasn’t robbed him of any ability on the field. Now, can Bell muster that mix of luck and durability that can lead to longevity?

Steelers Nation will get its first glimpse this evening vs. the Chiefs.