The 2016 Steelers bye week finds Pittsburgh exactly where they were at week 7 a year ago 4-3 with Le’Veon Bell having missed beginning of the season and Landry Jones having already made an unexpected start.

Yet, in 2015 the Steelers 4-3 record seemed to create a more positive vibe in Steelers Nation; a year later the feeling isn’t quite so rosey because the 2016 Steelers fallen short of expectations. To understand why, the Steelers 2016 bye week review focuses on the milestones Pittsburgh needed to pass to realize their Super Bowl aspirations. 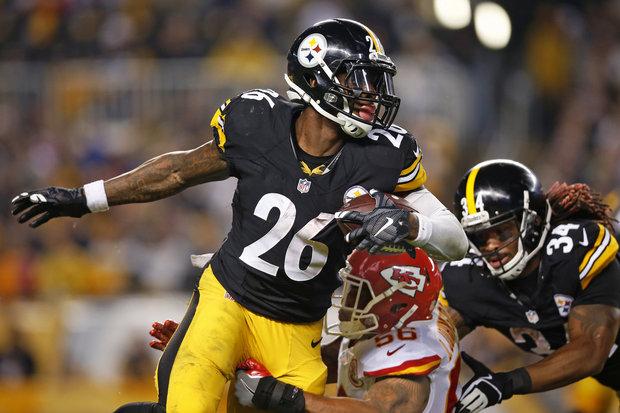 No matter how you measure it, Le’Veon Bell is a bright spot in the Steelers 2016 bye week assessment. Photo Credit: Jared Wickerham

Prior to the 2016 season, Steel Curtain Rising made a number of assumptions and outlined a number of areas where the team needed to improve to transform the Steelers 2016 Super Bowl hopes into reality.

One of the assumptions this site made on the eve of the 2016 season was that this Steelers team was deeper than its recent predecessors and that it had the depth to compensate for injuries.

Depth at tight end, and to a lesser extent, wide receiver and offensive line have proven to be the positives. When the Steeles signed Ladarius Green for big money after Heath Miller retired, Kevin Colbert and Mike Tomlin clearly didn’t envision a tight end by committee system that Pittsburgh has been forced to use thus far this season.

No this group clearly hasn’t replaced Heath Miller’s legendary reliability, nor has it offered the dynamic spread-the-field spark that Ladarius Green promised to, and blocking has been an issue at times. But no one can charge that tight end has been a liability for the Steelers thus far, and Ben Roethlisberger and Landry Jones have found ways to work all three into the passing game which has helped compensate for injuries elsewhere.

At wide receiver, Steelers coaches hoped and expected Markus Wheaton and Sammie Coates to be the proverbial two dogs struggling over the bone that is the number 2 receiver slot opposite Antonio Brown. Instead, both men have been limited with injuries. Yet Darrius Heyward-Bey, Eli Rogers and Cobi Hamilton have all stepped up and contributed.

Landry Jones will never nature into a franchise quarterback, but as a backup he’s earned the respect of Steelers Nation, even if portions of it will refuse to grant it.

If the Steelers offense has at least held its own thus far in 2016, the same is decidedly not true about Pittsburgh’s 2016 defense. Not only has Keith Butler failed to build on the improvement his unit displayed last season, it appears to have regressed.

These numbers are terrible, prompting one Mexican blogger to compare it to the 1988 Steelers defense.

Perhaps the comparison to Tony Dungy’s disasterous 1988 defense is a little exaggerated, but there is nothing to gloss over or sugar coat when it comes to the Steelers 2016 defense. 7 games into 2016, the Steelers are failing to pressure the passer, failing to secure turnovers and giving up yards in gobs against the run.

Losing Bud Dupree to injured reserve has hurt the pass rush, and clearly Jarvis Jones, Arthur Moats, Anthony Chickillo and James Harrison are not picking up the slack. Indeed, Cameron Heyward has more sacks than all of the Steelers outside linebackers combined – and Cam Heyward has missed 2 games.

If Vince Williams can help make up for the loss of Ryan Shazier, the same cannot be said of Ricardo Mathews. The Miami Dolphins ran his way early and often, and kept the Steelers off balance for the entire afternoon because of it.

While Javon Hargrave and Daniel McCullers do not deserved to serve as scapegoats, one has to wonder if the Steelers wouldn’t like to reexamine the cost-benefit analysis that led them to allow Steve McLendon to depart.

Perhaps the biggest area of concern is the Steelers secondary.

As has been discussed on this site before, Kevin Colbert, Mike Tomlin, Todd Haley and Carnell Lake made the collective decision to destroy their cornerback depth chart from 2015 and start anew.

Nor should they. But if that trio (or quartet, if you add in Will Allen at safety) lacked talent, it didn’t lack for experience. At this point Antwan Blake had at least logged a pick six and Will Allen an interception – we’re still waiting to see the first interception from the Steelers 2016 secondary.

For what it is worth, the Steelers pass defense has “improved” from 30th against the pass in total yards to 27th. Does that offer hope that Sean Davis and Artie Burns can deliver more during the second half of the season? When late November and early December rolled around, Bill Cowher was famous for saying that at that point, rookies weren’t rookies anymore.

One has to hope that Artie Burns and Sean Davis soon reach the point where they outgrow their rookie growing pains as it would greatly improve the Steelers Super Bowl chances.

Tripping Up Tomlin with Trap Games – Or Not

While Steel Curtain Rising has been and remains an unabashed supporter of Mike Tomlin, this site has not hesitated to criticize his teams from playing down to the competition. And if Tomlin does deserve much of the heat that he gets for the Steelers falling into tramp games, perhaps the situation is not as dire as it seems.

Over on Behind the Steel Curtain, Tony Defeo has offered a vigorous defense of Mike Tomlin. We won’t steal Defeo’s thunder but strongly encourage you to click here to read his article (seriously folks, do it, we’ll wait.) Taking a more cerebral approach over on Steel City Blitz, Ben Anderson has contrasted Mike Tomlin’s record against sub .500 teams on the road (and at home) with that of Chuck Noll and Bill Cowher. As Anderson argues, numbers don’t line: Mike Tomlin’s performance in this respect is in line with his predecessors.

And let’s acknowledge that the Philadelphia Eagles are probably a pretty good football team and that the Miami Dolphins perhaps might not be as bad they seemed early in the season.

But if that is true, then it is also true that the Steelers came out flatfooted vs. the Eagles, and appeared to fall right into the Dolphins game plan. And there’s another element that comes into play which is Ben Roethlisberger’s play on the road. Steel Curtain Rising will take a closer look at that this week.

One thing is clear, however. Mike Tomlin must alter his approach when it comes to preparation for games against “weaker” opponents.

In seven games thus far, the Steelers have looked like legitimate Super Bowl contenders in victories against the Redskins, Chiefs and Jets. They’ve also found a way long a divisional win against the Bengals. They struggled in two old fashioned spankings on the road at the hands of the Dolphins and Eagles. And they had a non-moral moral victory against the Patriots.

Any Steelers 2016 bye week review is going to paint the classic “Glass Half Full vs. Glass Half Empty” scenario, as the Steelers have both struggled and dominated without showing much in between.  At the end of the day, the key for the Steelers during the bye week is to get healthy.

The Standard Might be the Standard, but the Steelers defense is not the same without Cam Heyward and Ryan Shazier, getting those two men back full time, and keeping them on the field will do wonders for the defense.  Bud Dupree, should he return, won’t be a savior, but the Steelers pass rush can hardly get worse.

On offense the Steelers need to keep Ben Roethlisberger in one piece, and need a return to health by both Markus Wheaton, Sammie Coates, and they need Ladarius Green to show he can contribute.

The truth is, even if the Steelers take a healthy 53 man roster down to Baltimore, Pittsburgh won’t play the rest of its 2016 schedule with a perfect bill of health.

But if they can check enough boxes in the health column the Steelers 2016 bye week review concludes that these Steelers can play with anyone.