Raise your hand if you’re Steelers fan excited to see Landry Jones start against the New England Patriots. OK. Didn’t think we’d get too many takers. Fair enough. With Ben Roethlisberger recovering from knee surgery and Cameron Heyward also the odds makers have been rather generous in installing the Patriots as 7 points favorites. 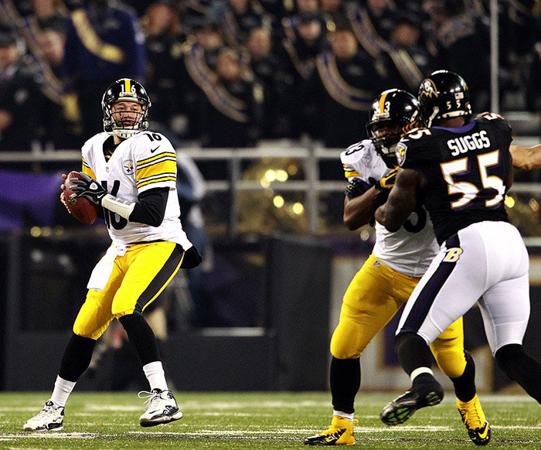 It had been a bad week for Chuck Noll that began with a 34-14 drubbing in the Astrodome at the hands of arch nemesis Jerry Glanville. Noll cut short his weekly press conference when reporters asked him what it would take for him to step down. Terry Bradshaw called for Noll’s dismissal su

ggesting he was too old for the job. Bubby Brister was injured, and back up Todd Blackledge was struggling even to get snaps from Mike Webster.

In short, no one expected the explosion that was coming, led by Rodney Carter who took it 64 yards to the house on the game’s third play. Carter rushed for 105 yards, caught a touchdown and completed a pass, as Noll employed uncharacteristic trickery. Merril Hoge ran for another 94 yards, and Rod Woodson set up another score with a 29 yard interception and Gary Anderson kicked 6 field goals.

Todd Blackledge was only 9 of 17 for 129 yards on the day, but that was good enough to give Pittsburgh the win.

1991 had been a tough year for Chuck Noll, and his Steelers had just been humiliated at home by the soon-to-be Super Bowl Champion Washington Redskins. Scalping dished out by the Redskins the week before at Three Rivers Stadium had given the Steelers a 4-7 record, and 4-8 seemed certain against the 9-2 Oilers.

It is also true that perhaps Neil O’Donnell should be considered a backup, having started since relieved Brister 5 weeks earlier against the Giants, but Noll had been coy about designating a “starter.”

The Steelers ability to shut down the “Run ‘N Shoot” offense is one of the reasons why that never “stuck” in the NFL, but that was far from apparent in 1991. Games like this began to change the tune, as Bryan Hinkle, Thomas Everett, and Shawn Vincent picked off Warren Moon 5 times.

Those turnovers set up 3 Gary Anderson field goals, a 43 yard pass from Neil O’Donnell to Dwight Stone, and a Warren Williams touchdown. For the record, Neil O’Donnell went 12 for 29 for 155 yards one touchdown and 1 interception.

Perhaps the lead up to this game would have been different in the age of social media, but news that Mike Tomczak got the starting nod over Neal O’Donnell came as a surprise when game day arrived.

But got toe-to-toe Tomczak did, and how! In 1994, 300 yard passing games were relatively rare in the NFL but both quarterbacks broke the 300 yard mark, with Tomczak topping Marino’s yardage total. But for all of that passing, the game represented more of a defensive chess match. Chad Brown, Jason Gildon and Joel Steed team to sack Marino 4 times, with Levon Kirkland intercepting him once.

The Steelers won the toss, but could not score. The Dolphins took over at their 40, but the vaunted Steelers 1994 Blitzburgh defense stopped him cold at Pittsburgh’s 47. Mike Tomzcak excelled in overtime, scrambling twice and completed passes of 27 yards to Barry Foster and 23 yards to John L. Williams to set up Gary Anderson’s game winner.

As this site has previously observed, Tomzack’s ’94 wins against the Dolphins and the Raiders marked the shift of the focal point of the Steelers passing attack away from Eric Green and to Yancey Thigpen, Ernie Mills, Andre Hastings and Charles Johnson.

Time to fess up. Just as Neil O’Donnell wasn’t really the “Steelers backup quarterback” in the 1991 Astrodome upset of the Oilers, the Steelers win over the 1-10 Bengals can hardly fall into the category of an “upset.”

But its author, Kordell Stewart, most certainly was a backup. Less than one year removed from winning the team MVP award, Kordell Stewart found himself on the bench in favor of Tommy Maddox. Raul Alegre of ESPNDeportes had revealed 5 weeks eailer during the Steelers Monday night game vs. the Colts, Bill Cowher had confided in him that he hadn’t wanted to bench Kordell, but felt he had to because Kordell had lost the confidence of the Steelers locker room.

Nonetheless, Kordell Stewart fearlessly took the reigns after Tommy Maddox’s injury the week before in Tennessee. The Steelers raced to a 17 point lead on a Jerome Bettis touchdown run, a 64 yard bomb from Stewart to Hines Ward, and a Jeff Reed field goal. But the Bengals fought back, scoring 14 points in the second half. The Steelers tacked on another 3 in the third quarter, but midway through the 4th the Bengals took the lead.

Kordell Stewart was flawless that day, going 22 for 26, one touchdown and zero picks.

2005 was a rough year for Green Bay, who entered the game at 1-10. On the face of it, that might make it difficult to categorize this win as “an upset” but if you’re playing at Lambeau Field, who do you want to be your quarterback Brett Favre or Charlie Batch, a man who hadn’t thrown a non-mop up time pass since 2001.

The Steelers struggled in this one, as did Batch, but he played well enough to win, as did Duce Staley who saw his last real NFL action, and helped the Steelers win with 76 yards rushing and a touchdown.

This Steelers 2012 game against the Ravens at M&T Stadium was one for the ages. The Steeler were reeling, having suffered back-to-back divisional losses, including an 8 turnover game to the Cleveland Browns. Charlie Batch had quarterbacked that game, and committed 3 of the turnovers, all interceptions.

And here the Steelers were, traveling to the home of their arch rival, with their 3rd string quarterback, 3rd string wide out, 2nd string outside linebacker. During the game, they would also lose their starting guard.

The lead changed 5 times. Twice in the second half, Steelers turnovers gave the Ravens a chance to put Pittsburgh away, and twice Pittsburgh clawed back. James Harrison led the Steelers final rally, with one of his patended strip-sacks which came shortly after the Steelers had turned over the ball. Charlie Batch fired a missle to Heath Miller, who then willed himself into the end zone.

Charlie Batch then took over at Pittsburgh 15 and with 6:14 remaining, led the Steelers on 13 play drive where Batch completed 7 straight passes, as Pittsburgh reached the Ravens 24 yard line. Shaun Suisham booted in a 42 yard field goal, and the Steelers had won.

Is Landry the Steelers Next “Legendary” Back Up Quarterback?

So, could Landry Jones author a game worth of inclusion of on this list above? With Cameron Heyward, Markus Wheaton, Marcus Gilbert and DeAngelo Williams out the odds are against him. But the odds were also once against Todd Blackladge, Neil O’Donnell, Mike Tomzcak, Kordell Stewart and Charlie Batch and they proved everyone else wrong.