Although the Steelers injury report still lists him as “Questionable” word is that Ben Roethlisberger will start for Pittsburgh vs. the Ravens at M&T Bank Stadium today. The news is welcome. Landry Jones first start in the Steelers loss to the Patriots wasn’t the disaster many (including yours truly) feared it would be. But starting at home is one thing, starting away is another.

News that Ben Roethlisberger probably will start evokes classic moments from the Steelers-Ravens rivalry like this one (available as of 11/6/16):

Although that wasn’t Troy Polamalu’s finest moment in the series – that distinction would be Polamalu’s pick six in the AFC Championship game – it is probably number two. Polamalu’s game changing play is also notable for fact most of Steelers Nation would prefer to forget:

Since the 2010 Steelers glorious Sunday Night Football win over the Ravens, Ben Roethlisberger (and the Steelers have struggled at M&T Bank Stadium.

In between, of course there was the Charlie Batch authored 2012 upset of the Ravens, but that game has been the exception, not the rule.

Ben Roethlisberger’s lifetime record vs. the Ravens is 9-8, a stat which includes his rookie debut and improves to 11-9 if you include Roethlsiberger’s playoff appearances against the Ravens. However, since that fateful night in 2010, Roethlisberger is only 2-5 in the regular season vs. the Ravens and 1-1.

Just how bad has it rough have Ben Roethlisberger’s travels to M&T Bank Stadium been? Well, numbers don’t lie and the tale they tell isn’t pretty: 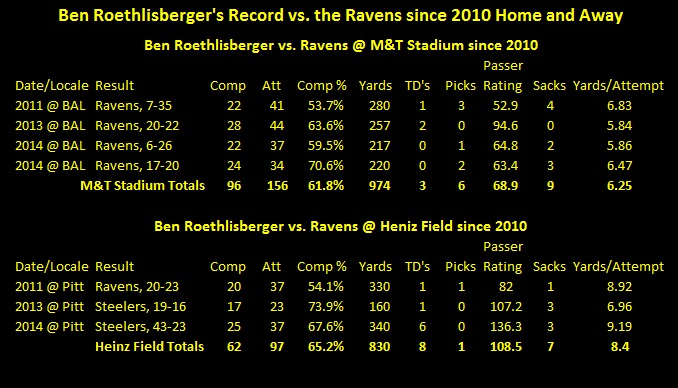 First you can see that he hasn’t had a 300 yard game in Baltimore since 2010, where has he’s done it at Heinz Field twice, although to be fair those are his only two 300 yard games in the regular season series. He completes about 3.3% fewer passes at M&T Bank Stadium than he does at Heinz Field – no big difference there. Neither do sacks appear to be a determinative issues, as the Ravens have sacked Ben Roethlisberger 7 times in 3 games at Heinz Field since 2010 and 9 times in 4 games at M&T Bank Stadium.

If the Steelers are to break that cycle and assert their stamp on the AFC North title race, and if Ben Roethlisberger’s M&T Bank Stadium losing streak is to end, Todd Haley had better find a way for Number 7 to get the ball to Number 84, preferably in the painted parts of the field.