The beauty of doing polls is that sometimes that results shock you. If you’re reading this, you know very well that the 2016 Steelers loss to the Ravens at M&T Bank Stadium ended with failed Chris Boswell’s rabona on sides kick attempt.

Calls for Art Rooney II to summarily fire Mike Tomlin and/or Steelers special teams coach Danny Smith were not hard to find. Yet, that seemed to simple and a far too easy scape goat given that Chris Boswell had executed a rabona on-sides kick while at Rice University.

When Steel Curtain Rising posted the poll and the accompanying article exploring both sides of the failed Chris Boswell on sides kick The results are surprising, because after all, what good is the internet if you can’t demand your pound of flesh and demand it now. But cooler heads prevailed, at least in this corner of Steelers Nation: 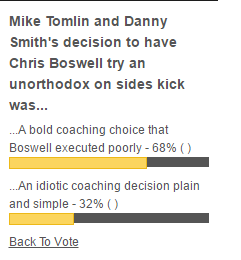 68% of our voters felt that the decision to have Chris Boswell try a rabona style on sides kick was a worth coaching risk. The other 32% took issue with Mike Tomlin and Danny Smith’s choice. That’s a pretty clear margin of victory.

I for one now agree with the poll results. Last Sunday’s loss was hard to swallow, and given that special teams snafus had hurt the Steelers badly (12 men on the field on one play, the blocked punt) that didn’t seem to be the time for Danny Smith to be trying something cute.

But Jim Wexell offered some valuable insight via Twitter:

That changes things considerable. This wasn’t some hair brained, “Hey Chris, you nailed did rabona on-sides kick once in college… think ya can go out there and do it again…?” scheme hatched on the sideline during at TV time out.

The Steelers special teams had practiced the rabona on-sides kick and, while risky, it was a worthy gamble on the part of Mike Tomlin that had it gone a little better, could have resulted in the game ending with Ben Roethlisberger’s getting the ball at midfield with 2-3 chances to hook up with Antonio Brown, Eli Rogers, Cobi Hamilton, Sammie Coates or even Le’Veon Bell.

That’s a long shot, but a shot worth taking.