Thanks to the season-long suspension of Martavis Bryant, the Steelers don’t have a serious number two receiving threat to take the heat off of Antonio Brown.

Oh, it seemed like they did during the first five games, when second-year man Sammie Coates was catching deep pass after deep pass (and even some shorter ones) and looked to be a viable alternative to the troubled Martavis Bryant, who has all the talent in the world but, by the end of 2016, will have missed 20 of a possible 48 career games due to suspensions alone. 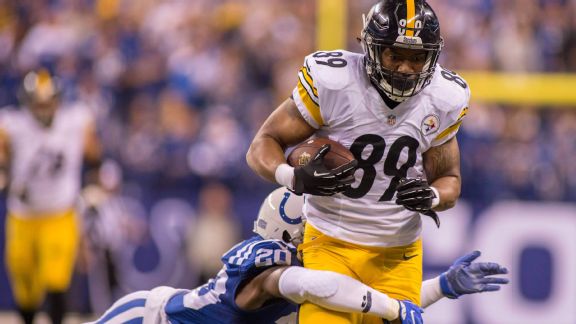 Ladarius Green catches a pass in the Steelers Thanksgiving win over the Colts. Photo credit: ESPN.com

But like a lot of other aspects of the team, Sammie Coates, who suffered a deep gash on his hand as well as a broken finger (or two) against the Jets a week earlier, began to take a turn in the wrong direction versus Miami in Week 6 and really hasn’t been the same since.

Eli Rogers, the second-year Steelers undrafted rookie free agent out of Louisville, has backed up his training camp and preseason praise by steadily improving as a slot receiver as the year has progressed. As for the likes of Markus Wheaton and Darrius Heyward-Bey, well, they haven’t been able to pick up the slack left behind by the absence of Martavis Bryant the the struggles of Sammie Coates because they haven’t been around.

Markus Wheaton was finally placed on Injured Reserve after battling a shoulder injury since training camp, while Heyward-Bey has been out since suffering a foot injury against the Ravens on November 6.

Either way you look at it, quarterback Ben Roethlisberger doesn’t have the plethora of weapons many thought he would.

I know what you’re going to say. Yes, Ben Roethlisberger has the best running back in the league in Le’Veon Bell to go along with maybe the best receiver. But just ask Antonio Brown how tough the sledding has been this season, with regards to beating double and triple coverage week in and week out.

Speaking of rumors, let’s address those rumors you heard about Ladarius Green, the super-talented understudy to Antonio Gates in San Diego, who came to the Steelers as a free-agent in March with the intent of redefining the tight end position in the wake of Heath Miller‘s retirement, they seemed mostly false for close to a year.

But when training camp rolled around in late-July, and Ladarius Green, who had offseason ankle surgery before evening signing with Pittsburgh, was still sidelined while recovering from the procedure (or post-concussion headaches, depending on what you believed), skepticism may have started to creep in.

And when Ladarius Green was placed on the PUP (Physically Unable to Perform) list before the start of the season, thus ensuring that he would miss at least the first six games, well, if you were like a lot of other Steelers fans out there, you may have been of the opinion that the Steelers didn’t do their homework and signed damaged goods–and it would have been hard to blame you.

While he did catch three passes for 30 yards against the Cowboys, fact is, Ladarius Green looked kind of lumbersome. That look carried over to Cleveland one week later, when he failed to catch a single pass.

But just when Steelers Nation may have been ready to write Ladarius Green off as a waste of a free-agent signing, there was Ben Roethlisberger this past Thanksgiving night at Lucas Oil Stadium in Indianapolis, back-peddling to avoid a hard-charging Colts pass rush on third and 13, before unleashing a deep throw off of his back foot.

Who was this pass intended for? How about Ladarius Green, who had a step or two on the guy covering him and pulled the pass in 35 yards later, thus preserving the drive and setting up a touchdown and a 21-7 advantage.

Late in the game, with the Steelers still holding that 21-7 lead and looking for a knockout blow, Ben Roethlisberger again hooked up with Ladarius Green on another long pass–this time for 32 yards.

The Roethlisberger-Green duo didn’t deliver the knockout blow, but they did land the body shot that set up the uppercut (the third touchdown catch by Antonio Brown) that put the Colts down for good.

Maybe that there’s some teeth behind the Ladarius Green deep threat. Maybe he isn’t such a wasted free-agent signing after all. Sure, he’s late to the party, but it’s not time to go home just yet. There are five games remaining in the 2016 campaign, and Pittsburgh (6-5) is in a dogfight with those Baltimore Ravens for the AFC North title.

However, perhaps Ladarius Green deep threat, can provide the second receiving option that takes the heat off of Antonio Brown and gives Ben Roethlisberger a huge and fast target to spread the field vertically with.

Will Ladarius Green redefine the tight end position for Pittsburgh? Who knows? But maybe he’ll help redefine the rest of the 2016 campaign  for the Steelers and help elevate their offense to the Super Bowl unit everyone thought it was supposed to be.