Can you imagine just how more exciting and dynamic the Pittsburgh Steelers 2016 defense would be today with Bud Dupree starting at left outside linebacker and Senquez Golson starting at the slot corner position?

You don’t know, and neither do I. The only thing we know for sure is that the Steelers had big plans for both, hence the expensive draft picks. Pittsburgh’s defense was flawed and aging for years under Dick LeBeau, and the 2015 draft was a big old helpin’ of youth for Keith Butler‘s first year as defensive coordinator. 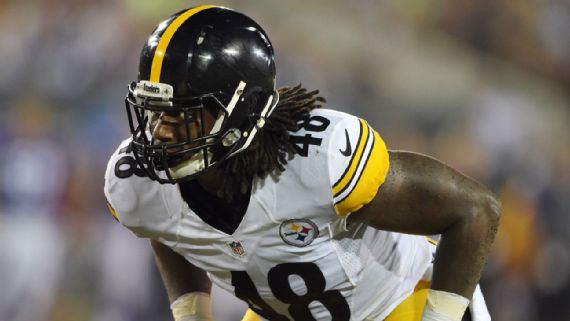 The Steelers may get Bud Dupree on the field in 2016, but he’s already missed a lot of time. Photo Credit: Kirby Lee, USA TODAY Sports

Word was Senquez Golson, a prolific takeaway artist at Ole Miss (10 interceptions in his senior season), was ear-marked for the slot corner position right from the start. Sadly, the Steelers hopes were dashed before Golson even had a chance to take one single rep in training camp, thanks to a shoulder injury that required surgery and forced him to the Injured Reserve list for his entire rookie season.

The excitement regarding Bud Dupree wasn’t on the level of what it must have been for New York Giants legend Lawrence Taylor after his  rookie campaign, but as Bud Dupree prepped for his second season in black and gold, the general thought was that he could perhaps finally do what Jarvis Jones thus far has failed to provide: To be the answer to the Steelers inability to generate a pass rush from the outside linebacker position.

Pretty much the same as the year before: the Steelers were really, really counting on him to play the slot corner position.

Unfortunately, Senquez Golson suffered a Lisfranc injury (mid-foot sprain) very early into the 2016 training camp; much like his shoulder ailment from the previous year, it required surgery and, ultimately the IR once again, after starting the year on the active roster.

Neither Senquez Golson or Bud Dupree has played a snap this year, and only one of them can actually be activated, while the other will miss the entire season. It’s looking more and more like Bud Dupree will be the one who gets the call, which would make Golson a de facto third-year rookie as he enters 2017.

People often criticize the front office for not addressing certain areas (and in many cases, rightfully so), but it’s hard to fault Kevin Colbert, Mike Tomlin and everyone else involved in drafting Bud Dupree and Senquez Golson.

To reiterate my original theme; we could be talking about two of the finest young defensive players in the NFL right now, but we’re not. We’re still speculating on how good either will be at the pro level.

It’s hard to get results when you’re not on the football field.