Mike Tomlin should sit starting outside linebacker James Harrison and use the opportunity to give second year player Anthony Chickillo some live-fire snaps at on the right side. 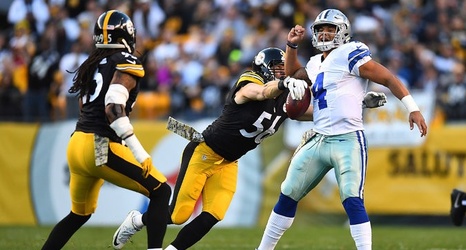 The Case for Playing Anthony Chickillo at ROLB vs. Cleveland

The Steelers tucked a minor, if not terribly surprising, bombshell into their inactive list prior to the Steelers Christmas comeback against the Ravens.

Given the Steelers injuries and player development issues, there’s nothing attention catching about 6 of those 7 inactives. But the decision deactivate Jarvis Jones speaks volumes.

The Steelers have stuck with Jones through injuries and growing pains, but following the Steelers loss to the Cowboys, Mike Tomlin ended the Steelers linebacker rotation. Since then Jarvis Jones snap count dropped from 56.9% to 50% vs. Cleveland, to 41.3% vs. the Colts, to 20% vs. the Giants, to 0.0% vs. the Bills and 0% vs. the Bengals.

Steelers Digest editor Bob Labriola might try to argue differently on “Asked & Answered,” but the Steelers deactivating Jarvis Jones going into their biggest regular season game since 2010 signals loud and clear that Jones no longer holds a place in Pittsburgh’s plans.

That means the Steelers need to find a new starting right outside linebacker. Tomlin, Keith Butler and Joey Porter would be wise to consider grooming Anthony Chickillo for that role.

Anthony Chickillo earned a starting role at left outside linebacker over Arthur Moats while Bud Dupree was recovering on injured reserve. Since his first start in Miami, Chickillo has managed two and a half sacks while splitting time with Moats.

Bud Dupree looks like a keeper on the left side, which is encouraging, but does nothing to plug the impending hole on the right side except potentially free Anthony Chickillo to move to the opposite end of the line.

That’s why coaches tend to wait until the off season to make moves like that. Fair enough. But the Steelers have nothing to gain or lose in their season finale vs. the Browns, and by giving Anthony Chickillo significant snaps at right outside linebacker, they’ve got a unique chance to see how the young defender performs under live-fire conditions.

Moving Anthony Chickillo to ROLB for all or part of the Browns game is a no-lose proposition for both the Steelers and Chickillo himself. Mike Tomlin and his coaching staff would be wise to take advantage.