December football has arrived. As the temperatures drop, this is the time of year when the contenders rise above the pretenders. It is impossible to label a 7-5 team “a contender” but the Steelers 24-14 win over the New York Giants gives Steelers Nation hope that they can soon earn the label.

And what’s more encouraging is that the Steelers authored this win, to borrow the words of Jim Wexell, by reverting “to a formula that helped them win two Super Bowls last decade,” a formula that combines physical, playmaking on defense, a ball control rushing attack paired with a field flipping passing game. 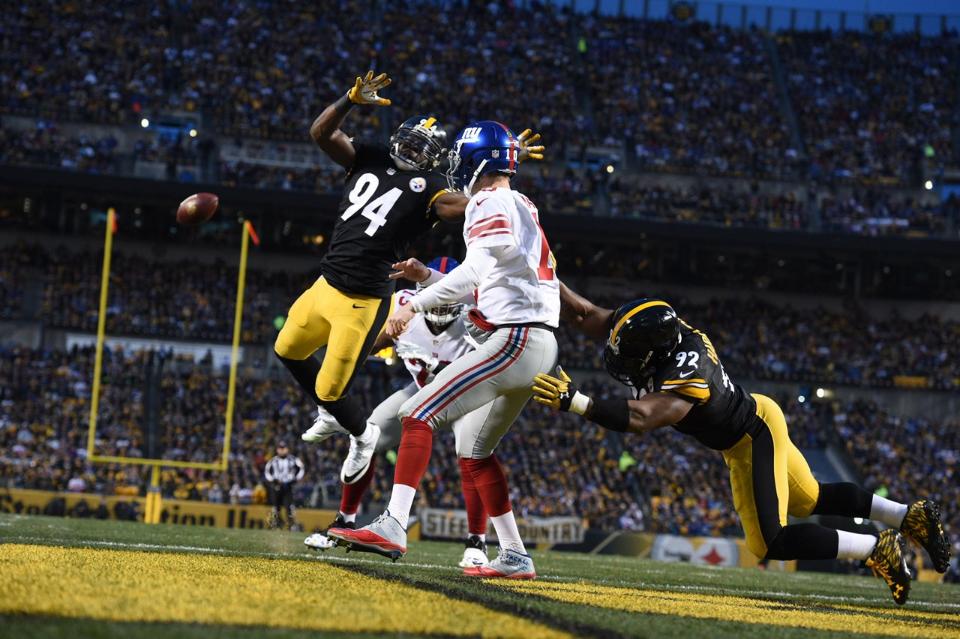 Eli Manning has no where to run as Lawrence Timmons and James Harrison close in. Photo Credit: Steelers.com

The Pittsburgh Steelers best three players are Ben Roethlisberger, Antonio Brown and Le’Veon Bell. All three have Hall of Fame level talent. The Cowboys loss confirmed that The Triplets can’t carry the Steelers alone, but during the Colts win others flashed that they might be stepping up.

An underperforming offensive line was a constant in the Steelers 5 losses this season. They either protected Ben Roethlisberger or opened holes for Bell, but struggled to do both simultaneously.

Undaunted by coaching against tough a Giants defense, Todd Haley opted to ram the ball down New York’s throat. The Giants made 5 tackles behind the line of scrimmage proving they’re for real..

But those plays stand out as the game’s exception, not the rule. Unlike the Ravens game, the Steelers offensive line created room for Le’Veon Bell to run, and when they couldn’t, Bell created his own space. Le’Veon Bell’s 118 yards will keep fantasy owners happy, but the offense did its best work late in the game.

Todd Haley force fed the ball to Le’Veon Bell 8 times, as Bell gained all but 5 of the Steelers 48 yards and set up Randy Bullock’s insurance field goal.

Sometimes, It IS Easy to Be Green….

An offensive line and a running back grinding out victory late in the 4th quarter certainly appeals to the “3 yards and a cloud of dust” purists in Steelers Nation, but it isn’t very sexy. A tight end who can stretch the field and make opponents pay is.

The Steelers have needed someone to take heat off of Antonio Brown, and against the Giants, Ladarius Green proved he can be that player. Green made 2 “field flipping” plays against the Colts, but the New York Giant’s 5th ranked defense figured to give him a stiffer test.

Green set up the Steelers first field goal with his 37-yard reception. After that, Ben Roethlisberger found Green for completions of 9 and ten yards. In the third quarter Brown flipped the field again with a 33-yard catch and topped it off with a 20-yard touchdown catch.

On a day when the New York Giants bottled up Antonio Brown as well as any other team has, Browns jaw-dropping end zone and sideline catches notwithstanding, the Steelers needed another playmaker and Ladarius Green delivered.

Can it just be that 21-days ago commentators, including this one, had written the obituary on the Steelers 2016 defense? Yes, that happens when a defense surrenders 2 touchdowns inside of the 2-minute warning.

And the Steelers defense has rallied since suffering what could have been a season-killing TKO at the hands of Ezekiel Elliot.

Lawrence Timmon’s interception end zone interception and 58-yard return both took points off the board and set up the Steelers first touchdown. Artie Burns, James Harrison, William Gay, Ryan Shazier and Timmons all stepped up to log yet another 4-down goal line stand when the Giants entered the Steelers Red Zone early in the second half.

Last February Kevin Colbert and Mike Tomlin decided to attempt a little addition by subtraction by letting go of underperforming and/or overpriced veterans on defense. Growing pains tied to that decision cost the Steelers during the 1st three months of the season.

But December football has started, and the win over the Giants shows that the Steelers early-season sacrifices are beginning to bear fruit for Keith Butler‘s defense.

Unlike its last two wins, the Giants victory arrives without an asterisk and that’s a welcome because both the Ravens and Bengals are also bringing their best football to the table here in December. The good news is that the Steelers control their own destiny and are free to focus on one opponent at time.

Mike Tomlin’s ability to get his team to do just that will define whether the 2016 Steelers end December football earning the title of “contender.”