The Pittsburgh Steelers Christmas Day show down with the Baltimore Ravens has turned out to be everything the schedule makers hoped it to be: A contest to determine the AFC North champions.

While the Steelers are taking a superior 9-5 record and a six game winning streak into the game, they’re also fighting another inconvenient truth:

Yes, the Ravens arrive in Pittsburgh with their own four game winning streak vs. the Steelers.

This represents what is likely the biggest change since the Steelers last win against the Ravens. Following Super Bowl XLV, Dick LeBeau did what he could to compensate for the declining talent on defense and kept the Steelers competitive on the defensive side of the ball in 2011 and 2012.

Statically the Steelers defense dropped further in 2014, although those numbers mask a late season surge by the Dick LeBeau’s defense over the final four games of the season. Mike Tomlin nonetheless decided to make a change following the season when it appeared that Keith Butler would finally accept a defensive coordinator promotion rather than wait for LeBeau to retire.

If yardage totals rose, they were off set by an increase in sacks, turnovers, and Red Zone play. After a slow start in this season, the 2016 defense is showing a lot of similar characteristics.

2. Steelers Scrap Their Secondary and Start Over

When you look at the Steelers defensive backfield depth charts from 2014 and 2016 side by side, the sea change really strikes you: 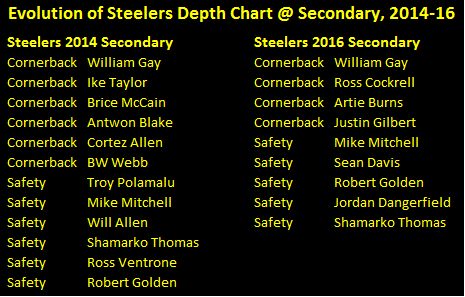 The Steelers secondary has changed a lot since 2014…

First, the Steelers are carrying 3 fewer defensive backs now than they were 2 years ago. Some of that was dictated by age – even the most wild-eyed optimists knew that Ike Taylor and Troy Polamalu were nearing the end when 2014 started.

The complete makeover says that their attempt failed. Of the 12 defensive backs the Steelers had on their roster the last time they beat the Ravens, only 3 remain. Yes, that number is three, because Shamarko Thomas is now exclusively a special teams player whereas Robert Golden occupied that role 2 years ago.

But gone or Antwon Blake, Brice McCain, Ross Ventrone, Cortez Allen, and Will Allen who the Steelers have replaced with Justin Gilbert, Artie Burns, Ross Cockrell, and Sean Davis.

Going into the Christmas game vs. the Ravens, the Steelers secondary looks to be improved since their last win.

3. Le’Veon Bell Establishes Himself as an Elite Back without a Backup

OK. This one involves a little slight of hand. Le’Veon Bell’s breakout game vs. the Tennessee Titans came two weeks after the Steelers last win over the Ravens. But that is the moment he lost his backup, when LeGarrette Blount decided to go AWOL.

No, no one is forgetting DeAngelo Williams, but due to injuries and suspensions, you can count the number of games Williams and Bell have played in together in single digits. Williams is returning from an injury and is expected to dress, but he hasn’t played since loss to the Ravens at M&T Bank Stadium.

Advantage: Steelers, unless Bell gets hurt….

4. A Carousel of Receivers has Started Opposite Antonio Brown

Antonio Brown was already an All Pro and then some the last time Pittsburgh beat Baltimore but injuries and suspensions have forced the Steelers to play musical wide receiver since then.

Martavis Bryant had announced his presence two games earlier and was expected to usurp Markus Wheaton as the Steelers number 2 wide receiver, but that hasn’t happened thanks to Martavis Bryant’s issues with addiction.

Darrius Heyward-Bey was basically just a special teams player when the Steelers last triumphed over the Ravens, but since then he’s emerged as a legitmate downfield threat, gotten promoted to the number 2 WR slot only to get hurt. Sammie Coates has had shots at the Steelres number 2 WR slot, but has failed to grasp them due to injuries and inefficiency.

Mike Tomlin has said that Darrius Heyward-Bey might play against the Ravens on Christmas, but at this point it looks like Eli Rogers and Cobi Hamilton will have serve as Ben Roethlisberger’s 2nd and 3rd choices downfield.

5. Heath Miller Has Hung It Up

Heath Miller has since retired since the Steelers last win against the Ravens. For the record, Miller only caught one pass in that game, but it went for 14 yards, so it probably resulted in a third down.

The Steelers of course brought Ladarius Green in to replace Heath Miller but lost Green for the first half of the season due to injury. Green has been making his presence felt since then, but is in the NFL’s concussion protocol. Given his history with concussions, it is not likely he will play.

6. Steve McLendon and Brett Keisel Have Moved On

The fact that Brett Keisel has retired since the Steelers last victory over the Ravens surprises no one, but Steve McLendon’s departure perhaps does. By 2014 it was clear that Steve McLendon wasn’t going to be Casey Hampton, but he didn’t need to be and he appeared to have a long future in Pittsburgh ahead of him.

However, the Steelers made a salary cap calculation not to invest in a nose tackle, and moved one.

Stephon Tuitt has replaced Brett Keisel and Javon Hargrave has replaced Tuitt. Normally that would give the Steelers a strong duo, but Stephon Tuitt is nursing a knee injury. And with Cam Heyward out for the year, that is not good.

There you have it. Pittsburgh has seen a lot of changes since the Steelers last win vs. the Ravens. Some of them offer promise for the Christmas day show down, others favor Baltimore.

What does that mean?