I’m not usually one to second guess when it comes to football games (okay, I’m a writer, so you better believe I’m one to second guess), but in the case of head coach Mike Tomlin’s decision to leave quarterback Ben Roethlisberger in the game late into the fourth quarter of the Steelers thoroughly convincing 30-12 wild card victory over the Dolphins at Heinz Field on Sunday, I was actually first guessing things.

With Pittsburgh equipped with a 30-6 lead and possession of the football early in the fourth quarter, my uncle and I, enjoying the rare postseason blow-out at Primanti Bros. on Route 60, both agreed that pulling all key offensive personnel at that point was absolutely the right decision.

Miami then proceeded to march 70 yards on nine plays and closed to within 18 points on a short touchdown pass from Matt Moore to Damien Williams. The problem for the Dolphins, however, was that they burned 4:20 of game-clock and only 5:57 remained. What further decreased Miami’s chances of a miraculous comeback was a failed two-point conversion thanks to Ross Cockrell.

Sure, the score didn’t look like a blowout at that point, but it may as well have been. The Steelers had possession of the football, an 18-point lead and less than six minutes remaining to preserve things.

Not a chance, given the way James Harrison, Ryan Shazier, Stephon Tuitt, Bud Dupree and Lawrence Timmons were corralling the Dolphins.

At that point, the Steelers Killer B’s (or Big Three, as they’re now being called in some circles) should have been excused to the sidelines. DeAngelo Williams was in for Le’Veon Bell was, but Ben Roethlisberger and Antonio Brown remained in the lineup. 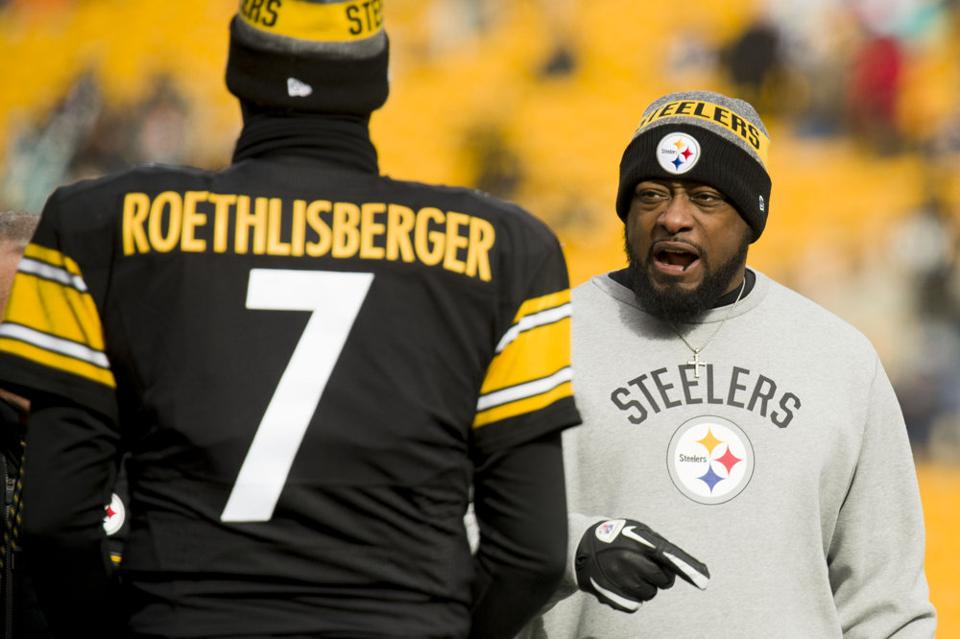 Unfortunately, not only did the Steelers not move the ball, they turned it over when Roethlisberger threw his second interception of the day with 4:23 remaining. No big deal, other than the franchise quarterback–the most indispensable member of the entire organization, as it pertains to competing the 2016 season with Lombardi in hand–suffered an ankle injury on the play and was seen wearing a walking boot after the game.

I’m a huge Mike Tomlin supporter, but he, like everyone else in Steelers Nation, was/is well-aware of how key injuries either wreck or compromised Pittsburgh’s postseasons in the very recent past.

In 2014, a hyper-extended knee suffered by Le’Veon Bell absolutely wrecked the Steelers season as they had no viable backup at running back after cutting LeGarrette Blount in November.

A season ago, the Steelers put up a good fight, but they went into the postseason without their top two running backs and lost Antonio Brown and almost lost Ben Roethlisberger as they progressed through the Wild Card round and into the divisional portion.

Remember the 2008 finale at Heinz Field when Mike Tomlin insisted on playing his starters in a meaningless game against the Browns? Pittsburgh had the number two seed locked up and nothing to gain or lose, yet many key players–including Roethlisberger–started the game.

Early in the first half of what would be a 31-0 victory over the Cleveland Browns, Roethlisberger suffered a concussion and had to be carted into the locker room.

But that was quite the scare.

Sunday was quite the scare, as well, but it looks like Roethlisberger will be fine and ready to go against the Chiefs this Sunday in the divisional playoffs.

As far as I and just about everyone else are concerned, that was one scare that was far from necessary.