For two straight off seasons, Steelers Nation has fretted and fidgeted while watching the Steelers asking the question “What IF.” The big “What IF” of course was “What if Le’Veon Bell had been playing?”

Going into the playoff loss to the Ravens in 2014 (2015, actually) Bell’s absence represented a loss of 34% of the Steelers total offense. It is harder to calculate the impact of Le’Veon Bell’s absence in the 2015 postseason because Bell missed the majority of the season injured or suspended.

But it is quite possible that Ryan Shazier and Ben Roethlisberger’s late game heroics wouldn’t have been necessary against the Bengals had Bell been available to kill the clock in the 4th.

In Pittsburgh’s wild card win against the Dolphins, Steelers Nation finaly got to see their “What IF” come true. So how did that work out? 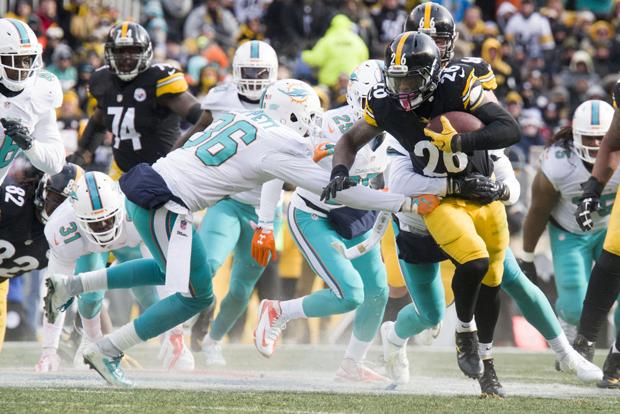 Let’s restate that: In his first post season appearance, Le’Veon Bell broke the Pittsburgh Steelers single-game playoff rushing record. Now consider what that really means. Had Le’Veon Bell broken this record, say, for the San Francisco 49ers, he wouldn’t have turned many heads, no disrespect to Roger Craig or Rickey Waters.

This is the same franchise that has sent Jerome Bettis, Franco Harris and John Henry Johnson (you forgot about him, didn’t you?) to the Pro Football Hall of Fame. It is the team that gave Willie Parker, holder of the Super Bowl record for the longest run from scrimmage, his shot in the NFL.

What’s more amazing is the way in which Le’Veon Bell broke the record. As Peter King, who is no Steelers cheerleader, observed:

Watch the man. He’s got the oddest rushing style in football today. “The Great Hesitator,” Phil Simms called him on CBS, and that’s just about perfect. Usually, Bell lines up as the classic I-back, seven yards deep, and when he takes a handoff from Ben Roethlisberger, he’ll take a couple of jab steps toward a hole and almost stop in his tracks. Denver, under Mike Shanahan, had a one-cut running style; the back was told to hit up in the hole immediately—that charging into the hole was the one cut. Most coaches decry what they call pussyfooting.

Peter King then backed up his argument with a statistic, that someone on his staff deserves a ton of credit for unearthing: A little bit of research reveals that it’s not unusual for a Steelers running back to break the century mark in his playoff debut.

Rashard Mendenhall, Bam Morris, Frank Pollard and Rocky Bleier also had 100 yard (or near 100 yard) performances early in their careers, but these came after their first post season game.

All impressive efforts, to be certain. But if you really want to appreciate what Le’Veon Bell accomplished, look no further than to the comments made by Ben Roethlisberger:

I’ll never forget when Charlie Batch was here, he used to always tell me about how he would hand off and just watch Barry Sanders. I am not trying to put Le’Veon with Barry Sanders yet, but it is fun to sit and watch and just see what he is going to do because he is incredibly talented. Walter Peyton dives over the pile as the Steelers are powerless to stop him. Photo Credit: Jonathan Daniel, Getty Images via NFL SpinZone

During Le’Veon Bell took a lot of heat during his rookie season with a lot of journalists both inside (see John Stiegerwald) and outside of Pittsburgh doubting his ability. Steel City Insider’s Jim Wexell took the time to compare his game-by-game results to Walter Payton’s rookie campaign, despite getting needled about it on social media from some of his peers.

As Ben Roethlisberger cautioned, it is still too early to categorize Bell alongside the Smiths, Harris, Sanders, and Paytons of NFL lore, but in Le’Veon Bell, the Pittsburgh Steelers certainly have a special running back.