Taken from the Grade Book of a teacher who watched his star students ace the essay portion of the test only to coast a little too much on the multiple choice section, here is the Pittsburgh Steelers Report Card for the Wild Card Win over the Dolphins. 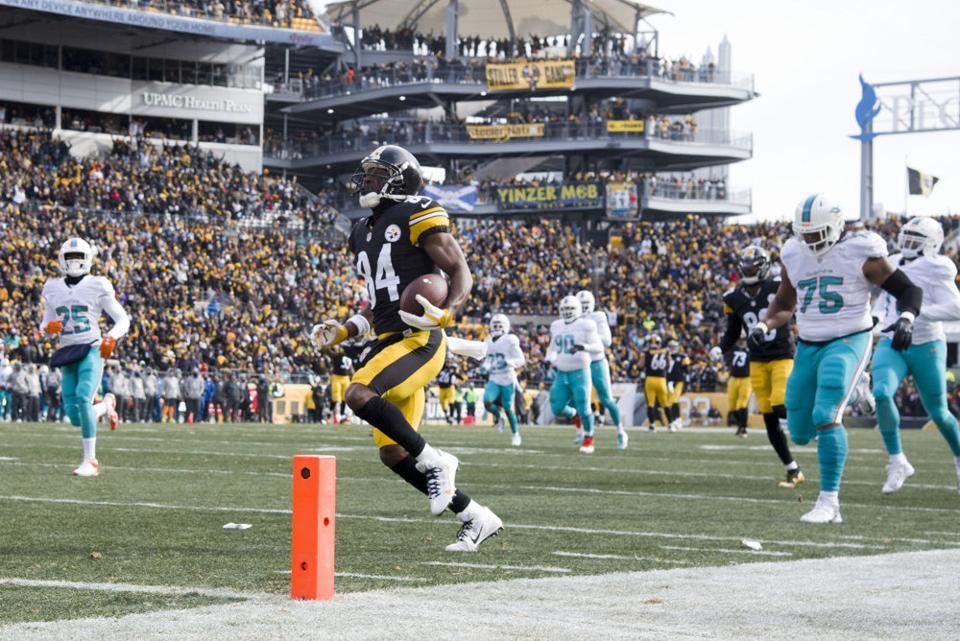 Antonio Brown waltzes into the end zone to put the Steelers ahead 7-0 in the Wild Card win over the Dolphins. Photo credit: Barry Reeger, PennLive

Quarterback
Ben Roethlisberger started the game in playoff form, completing his first 11 passes including two long touchdown strikes. Those numbers are excellent, but by Ben Roethlisberger’s own admission he took his eye off the ball. The Steelers fourth drive should have put the nail in Miami’s coffin, instead Ben Roethlisberger threw an interception which opened the door to Miami making a real game of it. Standards are higher here in the playoffs, hence the “Good, but…” grade for Ben. Grade: B-

Running Back
Le’Veon Bell finally got to start a playoff game and when he did he broke Franco Harris’ single game yardage record. Bell ran for 167 yards. Take out Bell’s longest run, and his average is still above 5 yards. Wha’ts more impressive, the Dolphins knew the runs were coming, and Bell STILL earned his yeards. DeAngelo Williams got two carries in mop up time, and Roosevelt Nix saw time at fullback. Grade: A+

Tight Ends
This is another clear case of how statistics don’t accurately measure a player’s performance. Jesse James has one catch for 6 yards. Ho hum, right? Wrong. Jesse James saved an interception by snatching it away from a defender. Jesse James also made a critical block the permitted the first touchdown. David Johnson and Xavier Grimble also saw time. Their names don’t show up in the stat sheet, but you can see the product of their work in Le’Veon Bell’s record breaking day. Grade: B

Wide Receivers
Believe it or not, Antonio Brown had never caught a touchdown pass prior to the Dolphins game. Brown rectified that scoring two, and doing so in dramatic fashion to give the Steelers a 14 point lead. After that, the Steelers went into a run on first, run on second and run on third type offense, limiting the opportunities for the rest of the receiving corps. Eli Rogers, however did make a nice 19 yard catch, and Demarcus Ayers had two nice short catches. Darrius Heyward-Bey and Cobi Hamilton each had 1 catch for 10 yards.

While the play of the wide recievers overall was strong, Brown had a couple of drops. These didn’t impact the game, but Kansas City will not be as forgiving and the group’s grade reflects that. Grade: B+

Offensive Line
While its wrong to say that an NFL running back is only as good as the line in front of him, the truth is that no running back can truly excel without a quality line blocking for him. The Steelers offensive line delivered so well for Le’Veon Bell that their third touchdown drive consisted only of runs. While the line’s overall play was extremely strong, Ben Roethlisberger did face a little more pressure than he has of late, and this is not a tendency that can be allowed to build momentum as the post season progresses. Grade: A-

Defensive Line
Just 3 months ago the Miami Dolphins humiliated the Steelers defensive line, and the unit took it personally. The Steelers defensive line responded with a monster game. Stephon Tuitt might only have four tackles and no splash plays, but he was all over the field, always running to the ball. Javon Hargrave only had 1 tackle, but if he’s not playing well Jay Ajayi is. He didn’t. Grade: A

Linebackers
Lawrence Timmons had a monster game leading the team with 14 tackles including 2 for losses, 2 sacks and registered 2 more QB hits. And he was probably not the best linebacker on the field. That distinction belongs to James Harrison, who set the edge and completely shut down Miami’s running game on the weakside. Harrison also had one of his strip sacks, which prevented Miami from getting on the board before the half. Bud Dupree had a strong game, with a hellicious hit on Matt Moore, and shared a sack with Harrison. Ryan Shazier had an interception which essentially ended any threat of a Dolphins comeback, and played extremely well against the run. An outstanding day for the linebackers. Grade: A 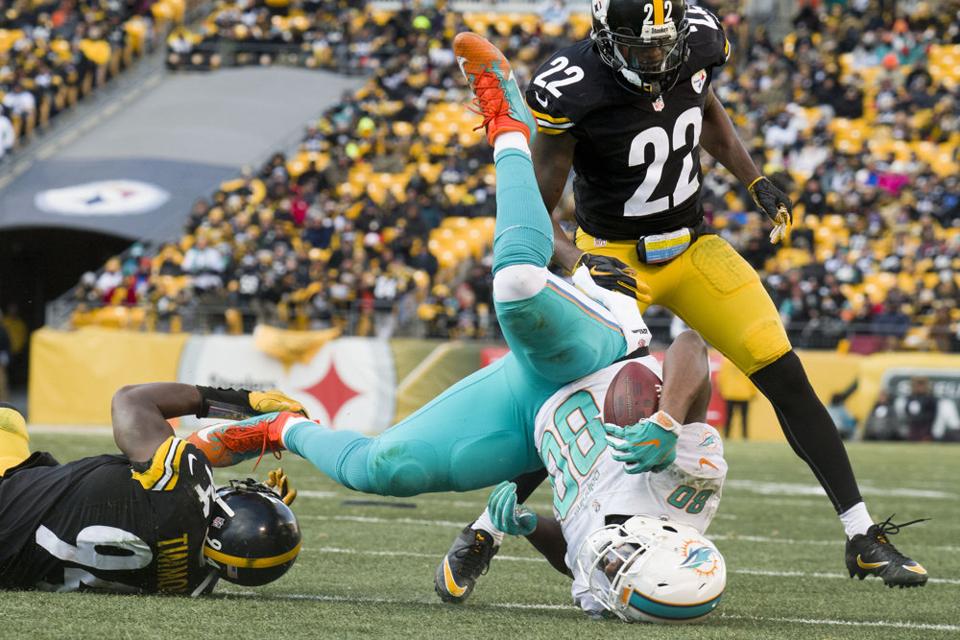 Secondary
Mike Mitchell was all over the field all day, and his strip sack of Matt Moore set the tone for the defense in the second half. Ross Cockrell led the defensive backs in tackles, and helped negate a Dolphins 2 point conversion. Artie Burns had 4 tackles while William Gay had a pass defensed that he could have intercepted. Sean Davis stepped up with a tackle for a loss before getting injured. Grade: B+

Special Teams
The Steelers special teams were showing some disturbing tendencies as the season drew to a close, and those have continued here in the post season.

Worse yet, the Dolphins averaged close to 30 yards on kick returns including a long one of 58 yards. The Dolphins also had a 9 yard punt return.

The Steelers return team continued to commit needless penalties, and again failed to stop a fake punt attempt. At the end of the day, these mistakes did not prove to be costly for the Steelers, but if they continue it is only a question of when and not if it will cost the Steelers a playoff game. Grade: D 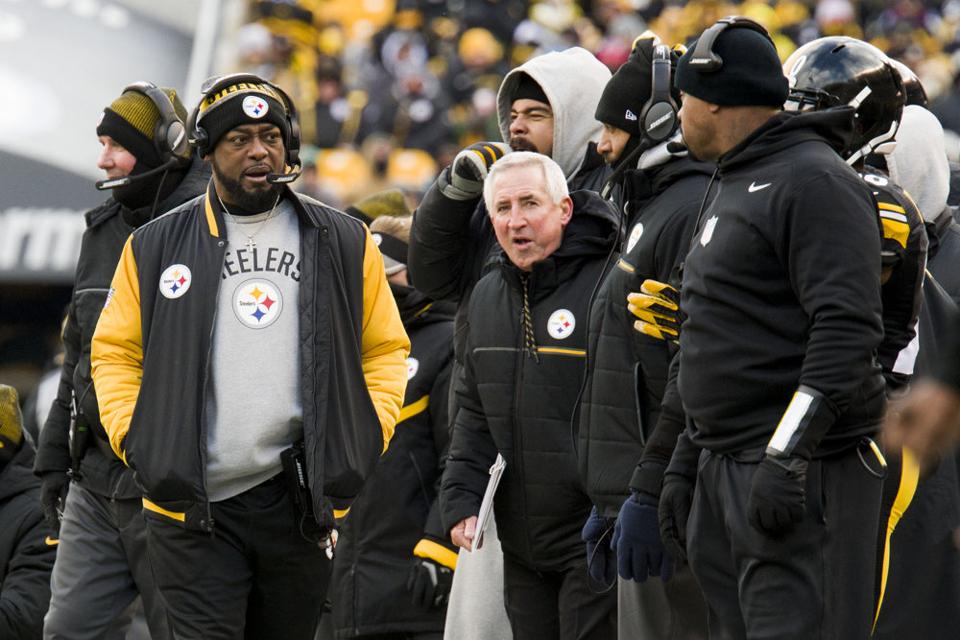 Coaching
You don’t get many do overs in the NFL, but both Todd Haley and Keith Butler learned from their mistakes in the first outing vs. Miami.

The Steelers began with a balanced attack and quickly put up 14 points, and then essentially turned the game over to the offensive line and Le’Veon Bell. That plan worked, and would have worked better with just a little better execution from Ben Roethlisberger, which isn’t Todd Haley’s fault.

On defense, Keith Butler’s unit completely smothered the Dolphins running game, forcing them to try to beat the Steelers through the air. As has been said many times in this space, Fantasy Football owners who started Matt Moore and Jarvis Landry probably came away happy, at least based on yardage totals. But, Keith Bulter’s boys forced the Dolphins to settle for 3 early in the game, and later the defense came up with turnovers on 3 occasions to snuff out any Dolphin comeback attempts.

Two years ago when the Steelers lost to the Ravens at Heinz Field in the playoffs, several position groups appeared to be out of their depth. Perhaps that was to be expected, although not excused, given the long layoff and turnover since the Tewbowing at Denver.

This was a team that came out with a specific plan on both sides of the ball and fearlessly executed it. Focus perhaps could have been a little better after the lead was established, but the fact that the Steelers were aware of that speaks to their coaching.

Mike Tomlin’s staff had a solid game plan and his players executed. The only real critique probably lies in the fact that Ben Roethlisberger was in the game so late into the 4th quarter. And that drops the coaching grade. Grade: B+

Unsung Hero Award
When the Dolphins run roughshod over the Steelers in October, any number of commentators pointed to opposing teams tremendous success in running the ball against the Steelers defense when either Cameron Heyward or Stephon Tuitt was out of the lineup.

What changed? Well, certainly the improvement is the result of a team effort. But one player who has stepped up and quietly but steadily made plays each week is L.T. Walton, who played extremely well against the Dolphins, making tackles behind the line of scrimmage, recovering a fumble, and plugging gaps to allow the linebackers to make plays, and for that L.T. Walton wins the unsung hero award for the Steelers Wild Card win over the Dolphins.