I won’t get into debating the merits the argument — this site has defended Tomlin against Bradshaw already and, besides, his record speaks for itself–but this latest setback in the relationship between Bradshaw and the Steelers, their fans and the City of Pittsburgh is just sad, annoying and above all unfortunate.

It also begs the question:

The exact date in question was October 21, 2002, and in-case you missed it, it was perhaps the greatest “welcome home” in Pittsburgh sports history.  All seemed to be well then. Alas, it was just another zig zag in the up and down relationship between the Terry Bradshaw and the Pittsburgh Steelers.

It must be acknowledged that Steelers fans have had a love/hate relationship with Terry Bradshaw. During the early portion of his career, as Bradshaw’s struggled to make the transition from college to the NFL, fans could be particularly harsh.

By the time the Steelers started winning Super Bowls however, things turned mostly to love as the quarterback ascended to the heights of his profession and position (four-time Super Bowl-winner, two-time Super Bowl MVP, one-time NFL MVP). When Terry Bradshaw returned to Pittsburgh in 2002, the faithful at Heinz Field cheerfully embraced No. 12 after nearly two decades of distance and disdain following Terry Bradshaw’s retirement in 1984 (the distance and disdain coming mostly from the quarterback, himself).

Months after that Heinz Field homecoming, Terry Bradshaw was back in town to get inducted into the Dapper Dan Hall of Fame in February of 2003, and who did he ask to present him? None other than his old head coach, Chuck Noll, the guy Bradshaw spent so many years criticizing for what he felt was poor treatment during his playing days. According to so many who were around during Terry Bradshaw’s time in Pittsburgh–including his teammates, former PR man Joe Gordon and even Chuck Noll, himself — the feud with his old coach was basically one-sided, with Bradshaw either unwilling or unable to let go of the past.

Here is a quote from Bradshaw’s speech, courtesy of the Pittsburgh Post-Gazette:

If I could reach down in my heart, I would say I’m sorry for every unkind word and thought I ever had. I mean that. I’m ashamed about that. It was…my wrong, my childness, my selfishness. Having said that, it kind of cleanses me. I miss my coach. I love my coach. I miss Chuck Noll.

The late, great Steve Sabol of NFL Films sat down with Bradshaw later in 2003 to chronicle the quarterback’s struggles during his playing days and also the burying of the hatchet with both the fans and Noll in an interview that was featured on the DVD, Pittsburgh Steelers: The Complete History.

What followed were a few great years of  Terry Bradshaw coming back to town to engage with the Steelers, the city and the reporters who were more than happy to interview him.

Bradshaw opened up about his loneliness and depression, but he also seemed like the old, charismatic Terry, often recalling many legendary tales with some of his teammates, including the late Dwight White and many, many others.

It was great to see this once rocky relationship seemingly repaired for good. So so we thought….

However, over the past half-decade or so a number of events reopened those rifts betweeen Terry Bradshaw, the city of Pittsburgh and Steelers Nation.

This latest snub reminded everyone Bradshaw’s decision to skip Art Rooney Sr.’s funeral in 1988 and endearingly apologized for his immaturity in that regard. And, of course, most recently he very publicly derided Mike Tomlin record and coaching ability.

When you read books like Their Life’s Work which include quotes from Terry Bradshaw in-which he stated that he didn’t want to talk about or revisit his time with the Steelers, you realize that those old wounds may never, in-fact, be healed.

Of course not, but for Terry Bradshaw to constantly wonder why he has to revisit the past or doesn’t seem to get why so many people cherish him and those memories is just disingenuous. 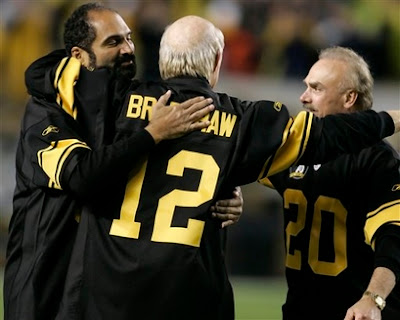 And, on the negative side, they’re going to lash out when the Blonde Bomber speaks ill of Big Ben; they’re going to show disappointment when Terry Bradshaw doesn’t show up to Chuck Noll’s funeral (even, if, in my opinion, that’s a personal and private matter); and they’ll ridicule him and call him a buffoon when he calls out the current head coach.

Obviously, people wanted that rivalry to resume after it died out in 2000, and the only ones who didn’t were the decision-makers who were unable or unwilling to make it happen for far too many years.

In Terry Bradshaw’s case, if he hasn’t moved past, well, his past, some 35 years after his playing days ended, one has to wonder if he’s either unable or unwilling to do so.

It’s too hard to say for sure.

Obviously, Terry Bradshaw is in a different place in his life right now and is a highly successful motivational speaker and larger-than-life personality as part of Fox’s NFL coverage. He has every right to criticize the Steelers if he feels it’s warranted, and, as fans, we simply have to accept that. This would all be fine, if it didn’t come with all the other baggage that Bradshaw still carries around from his time with the organization.

In many ways, it is bizarre. Think about it, how many iconic sports figures who were as important to an organization as Terry Bradshaw was to the Steelers have this kind of on-going rift with their old team? You could probably count the number on one hand and have a few digits left over.

Terry Bradshaw, Puts Himself on the Outside Looking In

In many ways, Bradshaw was THE main cog in those four Steelers championships. Sure, Dan Rooney hiring Noll as  head coach was maybe the most significant moment in the franchise’s history (some in the organization have credited the great Emperor with showing them what many now call “The Steeler Way”).

Chuck Noll’s drafting of Mean Joe Greene was most important player acquisition in team history, mainly because Joe Greene was maybe the finest leader the franchise ever employed, someone who simply refused to accept losing and demanded accountability from every single one of his teammates. Terry Bradshaw and Lynn Swann in the heyday of the Super Steelers. Photo Credit: Getty Images via CBSSports.com

As for Terry Bradshaw, well, it’s like the story he often recalls involving a day in practice just before the glory days were ushered in. Dwight White supposedly hit Bradshaw a little too hard, and the quarterback jumped in the defensive end’s face and said, “You may lose with me, but you’ll never win without me.”

How true of a statement that was. Every NFL team needs a franchise quarterback in order to be a true Super Bowl contender (history has proven that time and time again). Regardless of Chuck Noll’s influence and Joe Greene’s leadership, the Steelers of the 1970s wouldn’t never have established themselves as a pro football’s greatest dynasty had Bradshaw not developed into a Hall of Fame quarterback.

Neither can anyone else.

In many ways, Terry Bradshaw’s career should be held in the same regard as Roberto Clemente’s time with the Pirates or Mario Lemieux’s transforming relationship with the Penguins, but it’s not.

So, again, does Terry Bradshaw have to embrace his playing days and all things Pittsburgh and the Steelers?

No, but it really would be if Terry Bradshaw and the Steelers made up and made up for good once and for all.

7 thoughts on “Wouldn’t It Be Nice If Terry Bradshaw Made Up with the Steelers. For Good…?”