The Steelers 2017 off season is already off to a little bit of a different start. Free agency remains a way away, yet there’s been a steady stream of news out of the South Side regarding Steelers free agent signings.

Instead, Kevin Colbert has been busy resigning the Steelers 2017 Exclusive Rights free agent class. What’s that? The term “Exclusive rights free agent” isn’t one you hear a lot either inside or outside of Pittsburgh. The first time I remember seeing it, in fact, was when the Steelers resigned Willie Parker after the 2005 season.

Here is a look at the Steelers 2017 Exclusive Rights Free agent class, how they got to Pittsburgh, and what they’ve contributed.

When it comes to backing up Le’Veon Bell, no one will confuse Fitzgerald Toussaint with being in DeAngelo Williams’ category, but he’s proven to be a reliable number 3 back.

Roosevelt Nix
How he got to Pittsburgh: Roosevelt Nix played defensive line in college, but Kevin Colbert, Mike Tomlin and James Saxon saw something they liked, took a flyer on him a fullback and he made the 53 roster.
What he’s contributed: In 2015 Roosevelt Nix distinguished himself on special teams while working capably as a fullback. In 2016, Roosevelt Nix showed himself to be an accomplished run blocking fullback.

In less than a year, Roosevelt Nix went from being a guy the Steelers Nation’s Twitter General Manager griped about being a “wasted roster spot” to someone they questioned coaches for not playing more.

Chris Boswell
How he came to Pittsburgh: Every General Manager has a list of emergency players on it should injuries strike. But the Steelers went through not one, but two kickers when Shaun Suisham went down, making Chris Boswell their third choice.
What he’s contributed: Do we really need to ask this? Chris Boswell kicked the Steelers into the playoffs with his six kicks and shoe string tackle against the Bengals, and did it again in the playoffs against the Kansas City Chiefs.

Chris Boswell has shown himself to be a reliable kicker who can make long kicks in the wind, in the rain and with playoff games on the line. Can’t ask for more than that.

By the end of the season Alejandro Villanueva had erased all of those doubts.

Alejandro Villanueva in his first start as Roosevelt Nix behind him. Photo Credit: Karl Roser, Pittsburgh Steelers, via Pittsburgh Magazine

Xavier Grimble
How he got to Pittsburgh: The Steelers picked up Xavier Grimble in September 15 after the 49ers cut him and added him to the practice squad where he stayed until making the 53 man roster in 2016.
What he’s contributed: Steel City Insider’s Jim Wexell was big on Xavier Grimble going into 2016, labeling him the Steelers X-Factor after Heath Miller retired he did so long before we know Matt Spaeth would get cut or Ladarius Green would have health issues.

Xavier Grimble might not have lived up to the hype in 2016, but he did come down with critical touchdowns against Cincinnati and Baltimore.

Anthony Chickillo
How he got to Pittsburgh: The Steelers drafted Anthony Chickillo in the 6th round of the 2015 NFL Draft. Because he was cut and resigned to a shorter contract, he’s an Exclusive Rights Free Agent.
What he’s contributed: Anthony Chickillo split time as a starter with Arthur Moats while Bud Dupree was recovering. During that time he had 2.5 sacks.

This might be a pipe dream, but if the Steelers haven’t explored moving Anthony Chickillo to right outside linebacker under the tutelage of James Harrison, they should. 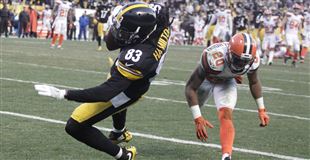 Cobi Hamilton
How he got to Pittsburgh: The Steelers picked up Hamilton in early August in what looked to be little more than move to fill out the training camp roster.
What he’s contributed: The AFC Championship loss might have reveled Cobi Hamilton as not quite ready for prime time, at least in the post season context, but Hamilton made 17 catches during the year, and he showed a penchant for coming down with the ball when the Steelers needed him to.

B.J. Finney
How he got to Pittsburgh: B.J. Finney was part of the Steelers 2015 undrafted rookie free agent class. He didn’t make the final roster, but did hold down a practice squad spot for the entire year.
What he’s contributed: B.J. Finney started 3 games for the Steelers this year, including two starts in place of Ramon Foster. He also started the season finale in place of Maurkice Pouncey.

This is probably just idle internet chatter, but there’s talk that the Steelers might (or “should”) consider saving on the salary cap by letting Ramon Foster go an starting B.J. Finney. Not likely to happen, but the fact that it’s a rumor should tell you something.

Jordan Dangerfield
How he got to Pittsburgh: After he failed to catch on as an undrafted rookie free agent with the Bills in 2013, the Steelers signed Jordan Dangerfield to a “Futures Contract” in January 2014. He made the practice squad in 2014 and 2015 and broke the 53 man roster in 2016.
What he’s contributed: Jordan Dangerfield’s stat sheet might not impress, but he did make two starts in 2016 and was the “Next man up” in the secondary ahead of Robert Golden and the 2013 Draft classes signature wash out, Shamarko Thomas.

It might not be accurate to label an NFL Exclusive Rights Free agent as “a player no one else wanted” but they are certainly players that someone else overlooked. When the Steelers 2007 season ended, Mike Tomlin promised to leave “No loose stone unturned” in his quest to bring a Lombardi Trophy back to Pittsburgh.

If you look at the Steelers 2017 Exclusive Rights Free Agent class, some players made larger contributions than other, but it clear that without their collective efforts, the 2016 Steelers never would have knocked on the door to Super Bowl LI.

That’s a testament to Kevin Colbert’s commitment to seeking quality talent from where ever may find it and to Mike Tomlin and his staff’s commitment to give every player a fair shot regardless of what his pedigree is.

All NFL General Managers and Head Coaches certainly pay lip service to this ideal, but the Steelers 2017 Exclusive Rights Free Agent class proves they mean it in Pittsburgh.