The Pittsburgh Steelers 2016 season came to an abrupt and ugly end in New England and the Watch Tower focuses its lights on the aftermath of that game, including coverage of tensions between Ben and Brown, coverage of the post-AFC Championship blame game and the Justin Gilbert story. The end to the Steelers season often times signals the beginning of some of most interesting stories about the team. This is a well-established tendency. Think of how stories of Bill Cowher banishing Kordell Stewart from QB meetings or getting into shouting matches with Tommy Maddox only broke after the games stopped.

In recent seasons, a new twist has accompanied the trend:

After all, it was Aditi Kinkhabwala who’d implied that she’d somehow predicted/foreseen Jack Bicknell’s dismissal after 2013, sparking a social media firestorm with Dejan Kovacevic. In 2014 she managed to get Steelers Nation talking about the groin injury Mike Mitchell had played through during the entire season, despite the fact that Allan Robinson had broken the Mitchell injury story in late October of 2014.

And now of course Aditi Kinkhabwala started the Steelers 2017 season by dropping this bomb buy suggesting Antonio Brown hung his head and “pouted” after DeAngelo Williams scored his first touchdown.

The substance of the story was immediately debunked by video evidence – Brown had in fact blocked on the play and was seen raising his arms in celebration after the score. But Kinkhabwala story had its impact as a quick Google search for “Antonio Brown pouting” confirms.

Interestingly enough, while one of Kinkhabwala’s reports remains available on the NFL Network’s site, the other displays other videos, such as this one of Tyler Matakevich’s NFL Combine workout:

The url would lead you to think that this would be on Aditi Kinkhabwala’s story about Antonio Brown, but it doesn’t….

A later check of the link displayed highlights of one Le’Veon Bell’s more impressive rushing efforts against the Giants. While could be due to a technical glitch, taken at face value it does not speak well to NFL Networks confidence in the veracity of the story.

And the story might have died there, but this one had legs….

Of Ben and Ron, Antonio and Dale

The impact that the relationship reporters has with his or her subject and the coverage that person receives has long been one of the Watch Tower’s pet interest in an effort to find evidence that supports or disputes the groundbreaking work Elliot King and Michael Schudson did on the subject in the 1980’s.

I like Brown. I’ve gotten to know him as well as a member of the media can know a player in these days of million-dollar contracts and internet stars. I’ve been a host of his radio show the past three years.
We’ve had talks about things other than football. About his family. About my family.

While Lolley certainly did not excuse Brown’s video, he did invite readers to see things from Brown’s perspective, which is understandable given the relationship between the two. The role that the relationship between Brown and Lolley became all the more interesting after the Pittsburgh Post-Gazette’s Ron Cook made the case for trading the Steelers Antonio Brown by dropping this bomb:

The distractions are a real problem. Brown’s three excessive celebrations penalties early in the season were bad enough. But there was the incident in the first Miami game when he jogged back to the line of scrimmage, delaying his teammates from running their 2-minute offense. In more than one game, when he wasn’t happy with how he was being used, he frequently ran the wrong patterns, either because of a lack of focus or — worse — intentionally. It happened a week ago in the AFC championship. That’s inexcusable.

The enormity of Ron Cook’s report did not go unnoticed.

Nor was the fact that he didn’t source his information. Clearly Cook wasn’t going to break confidentiality and out the player or the coach who spilled the beans on someone else. But he also failed to provide any anonymous credit by attributing the report to “A league source” (generally a code word for an agent) or “a member of the locker room” or “someone inside the Steelers organization” (a coach or front office staffer.)

The same day Cook’s article ran, Dale Lolley countered the argument in favor of trading Brown by reminding everyone that Ben Roethlisberger wasn’t always the ideal teammate, or citizen, and cited several verifiable facts to refute the argument that Brown is somehow a bad teammate.

Then, it was Roethlisberger, through his personal mouthpiece, taking shots at Brown, suggesting that Brown ran the wrong routes on purpose to sabotage the team. Please. Might there be times when Brown runs the wrong route? Sure. He probably does it just like every other receiver in the game. Might there also be times when Roethlisberger calls the wrong play? Absolutely. [emphasis added]

To the naked eye, it might seem as if Lolley is making a jump by assuming that Ben Roethlisberger is Ron Cook’s source. By Ron Cook hosts Roethlisberger’s radio show, and the two are known to have a close relationship.

Indeed, long before this story was born, a credentialed member of the Steelers press corps shared with the Watch Tower that, to the chagrin of other reporters, Ron Cook frequently gets exclusive access to Ben Roethlisberger after games.

From a media analysis standpoint, on the surface it looks like Ben and Brown are conducting a surrogate war of words using journalists as proxies, although to be to Dale Lolley, his suggestion that Roethlisberger perhaps calls the wrong play at times is presented as just that a suggestion.

There’s of course nothing wrong with reporters relying on relationships and exclusive access to write compelling stories – in fact, that’s their job. But the Watch Tower hasn’t seen such great contrasts in a major Steelers story since perhaps Stanley Druckenmiller’s attempt to buy out the Rooney brothers.

Fans care the most about the football angle of the story as they should. Art Rooney II has made clear the team isn’t interested in parting ways with Brown, which means that Mike Tomlin must find a way to keep 2 of his 3 Killer Bees happy.

Steelers Nation took the Steelers (latest) AFC Championship loss to the Patriots like a sucker punch to the get. The beating was thorough with the Steelers not so much as failing to get on Mike Tomlin’s moving train as being hit by it.

Most of the coverage centered on the ease with which Tom Brady tore up the Steelers zone defense followed by venting on the Steelers unwillingness and/or inability to counter by playing man defense. 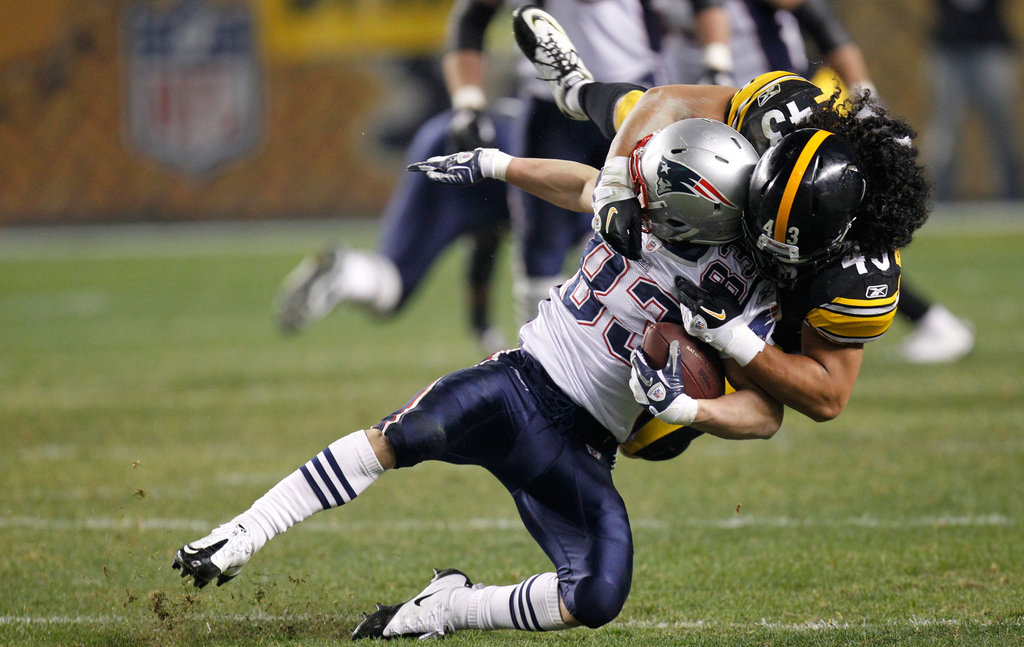 Because defeating the Patriots doesn’t happen with defense, as the Houston Texans learned in the Divisional Round. Sack Brady, harass Brady, intercept Brady, but if you don’t have the offense to score and possess the ball and compete in time of possession, eventually Tom Brady will get enough done to beat you….

Any vision of the Steelers winning this game had them showing themselves capable of taking a punch from the Patriots, but then also gathering themselves and hitting back.

Labriola then pointed out any number of areas where the Steelers offense fell short, from Sammie Coates dropping his first pass, while also highlighting the failings of Cobi Hamilton and Eli Rogers. A few days later, Labriola also reminded the Twitter defensive coordinators in Steelers Nation that Tom Brady actually had a pretty good game in 2011 when the Steelers surprised him by playing man defense, arguing that the key to the win was the offense’s production.

Over on Steel City Insider, Jim Wexell offered his readers something unique as well. Three days after that game, in his State of the Steelers he offered readers about as close to a fly on the wall review of what had happened in Steelers practices the week before the as a beat reporter can without risking his credentials.

The Watch Tower won’t steal Wexell’s thunder, but he offered enough insight to make both the optimism going into the game, and the ultimate disappointment understandable. He also detailed some unorthodox, albeit, unsuccessful plans to pressure Brady.

As everyone knows, the Steelers cut Justin Gilbert just months after trading a 6th round pick to acquire his services. One silver lining is that the Steelers would not be on the hook for the remainder of Justin Gilbert’s contract, which would have been guaranteed due to his draft status.

Simon Chester, resident salary capoligist at The Steelers Wire, sprung into action and wrote a piece that seemed to indicate that Gilbert had been suspended by the Browns, thus voiding the guarantee on his deal.

That seemed to make sense, but a day later Jeff Hartman and Flip Fisher of Behind the Steel Curtain got Ray Fittipaldo on the record, who broke the story for the Pittsburgh Post Gazette, on the record explaining that the Steelers had ensured that they would not be responsible for any guarantees beyond the 2016 season. Cleveland, it would seem, had agreed to pick up the rest of his contract.

BTSC earns Watch Tower kudos for going the extra mile to add extra clarity to the top story of the week.

A week or so after the AFC Championship an ominous “Farewell Cruel World” headline appeared on Rebecca Rollet’s Going Deep: An Introspective Steelers Site. Now in the interests of full disclosure, yours truly is a part-time contributor to the site, but had gotten no heads up about this, but the headline’s implication appeared to be unmistakable.

However, clicking on the link didn’t announce that the site was closing its doors, but rather that:

…Going Deep is Going to Stop producing daily posts for a while, probably for most of the off-season. Much as we enjoy writing about and thinking about the Steelers, it’s just too difficult to come up with content of substance when nothing much is happening. And since the whole point of this site was to provide content of substance, it leaves us in a bit of a bind.

From the perspective of someone who has blogged about the Steelers since 2008, sometimes it is actually easier to find things to write about during the off season (an observation BTSC founder Michael Bean once expressed) the truth is that there isn’t much going on at this point.

Let’s be honest. When Rebecca launched the site in 2015 with the aim of publishing something everyday without chasing headlines (i.e. no articles about a former Steelers practice squad player’s Instagram tirade) yours truly was skeptical she could pull it off.

She also earns Watch Tower kudos for deciding to shift things down to keep her focus on quality and not quantity. In a Steelers blogesphere that is littered with sites that can be known to publish articles that debate the grades the Steelers get in someone’s mock draft, its refreshing for the Watch Tower to shine its lights on someone moving in the opposite direction.