Antonio Brown, the Steelers superstar receiver and social media celebrity, has come under fire recently for putting too much emphasis on his superstar status and for, well, being on social media too much.

Among Antonio Brown‘s many follies recently was his Facebook Live post in the Steelers’ locker room shortly after an exciting 18-16 victory over the Chiefs in the AFC divisional playoffs on January 15.

I can go on and on about Antonio Brown’s various transgressions that include your usual diva-like receiver tendencies of whining and complaining about not getting enough passes thrown his way, but if you’re reading this article, you probably know it all by now. 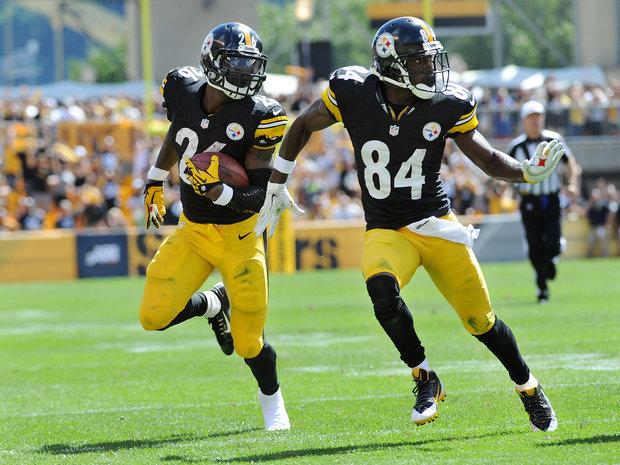 As is often the case in the Internet Age, fans have been quick to call for the Steelers to trade Antonio Brown to another team. Not all of the fans, mind you,  but, relative to his status as perhaps the game’s top wide-out, enough to make it noticeable.

Fans are just crazy about the NFL Draft and draft picks. And any scenario that could involve Pittsburgh having multiple first rounders in this spring’s draft would be akin to counting down the days until Christmas morning for so many out there.

But if you think Antonio Brown, who has one year left on his current contract, would garner two first round picks in a trade, you are crazy. Given Antonio Brown’s lame-duck status, fetching even one first rounder might be little more than a pipe-dream.

However, that begs an even bigger question: even if you can garner two first round picks for Antonio Brown, why would you want to?

Why Antonio Brown is Worth More than 2 First Round Picks

First of all, contrary to what you always think every February, March and most of April, first round picks don’t always pan out.

Secondly, how can a first round pick (or even two) possibly best what Antonio Brown has and will probably continue to produce on the football field week in and week out?

Given that the Steelers were missing Martavis Bryant for all of 2016, Markus Wheaton for all but three games and tight end Ladarius Green for all but six, it makes perfect sense that Antonio Brown’s numbers would see a swift decline from the year before.

Remember that offense that everyone envisioned, the NFL’s equivalent of the Death Star, complete with a plethora of aerial weapons for quarterback Ben Roethlisberger to pick and choose how to obliterate opposing defenses? That kind of went up in smoke (pun intended) when Martavis Bryant was suspended for testing positive for marijuana for the second time in as many seasons.

You throw in the aforementioned injuries to some other targets–Green was supposed to be the downfield threat at tight end that would compensate for Bryant’s absence as the number two receiver–as well as Sammie Coates‘ swift decline following a promising start to his second year, and Antonio Brown was destined to produce less in 2016.

Let’s face it, when you have Demarcus Ayers, Cobi Hamilton and Eli Rogers (no offense to those men as they appear to be developing into a fine NFL receivers) as complementary targets, who do you think defensive coordinators are going to focus on stopping, them or Antonio Brown?

This might also explain why Antonio Brown’s yards after catch (YAC) dropped from 587 in 2015 to 387 last year. Sure, it only makes sense that Brown’s YAC would decrease along with his overall yards, but it also illustrates the lack of room he had to work in after making most of his 106 receptions.

And even if Antonio Brown had benefited from being complemented quite nicely by Martavis Bryant, Marcus Wheaton, Sammie Coates and Ladarius Green in  2016, this does not mean his statistics wouldn’t have taken a dip. After all, Antonio Brown averaged 125 receptions a season between 2013-2015, a pretty historic run of productivity for a receiver from any generation–even one playing in the current era of pass-happy football.

Still Want Steelers to Trade Antonio Brown? Careful for What you Wish….

Again, fans are often quick to want to cut a player loose these days, even if his talents are all-world and his transgressions aren’t of the legal nature.

Let’s not forget, Pittsburgh’s franchise quarterback hinted at retirement mere hours after the Steelers 36-17 loss to New England in the AFC Championship game. It is believed that Ben Roethlisberger’s hints were mostly out of frustration, that he was tired of the likes of Antonio Brown and his antics.

However, despite an apparent friction between No. 7 and Antonio Brown, does anyone really think that the best way to entice Ben Roethlisberger into playing longer would be to eliminate his number one target, arguably the very best in the game at his position?

Yes, Antonio Brown is apparently a high maintenance member of the locker room and maybe a little more self-centered than most receivers (and that’s saying something), but this is the man who essentially saved the Steelers season, when, despite three defenders vehemently trying to prevent him from doing so, extended his arm over the goal line with nine seconds left to give the Steelers a pulsating 31-27 victory over the Ravens on Christmas Day, which clinched the AFC North title.

Brown is also the same man who had the presence of mind to keep running across the field late in the divisional round against the Chiefs, got himself open and clinched the victory by reeling in Roethlisberger’s pass on third and three.

Fans have also been quick to point out that since Pittsburgh has produced a seemingly endless string of receivers in recent years–let’s not forget Antonio Brown was once part of the Young  Money trio that included Mike Wallace and Emmanuel Sanders–he could be replaced, if not totally, then approximately.

But with 632 receptions in just seven seasons–including four-straight with 100 or more– Antonio Brown is quickly ascending up the record books of Steelers receivers  and could quite literally ellipse all of the records set by Lynn Swann, John Stallworth and Hines Ward while he’s still in his early-30s.

Part ways with Antonio Brown, and the Pittsburgh Steelers are a lesser football team.

I don’t think anyone is ready for that.