The question heading into the 2017 NFL Draft is whether the Steelers want to stand pat or continue that renewal process. 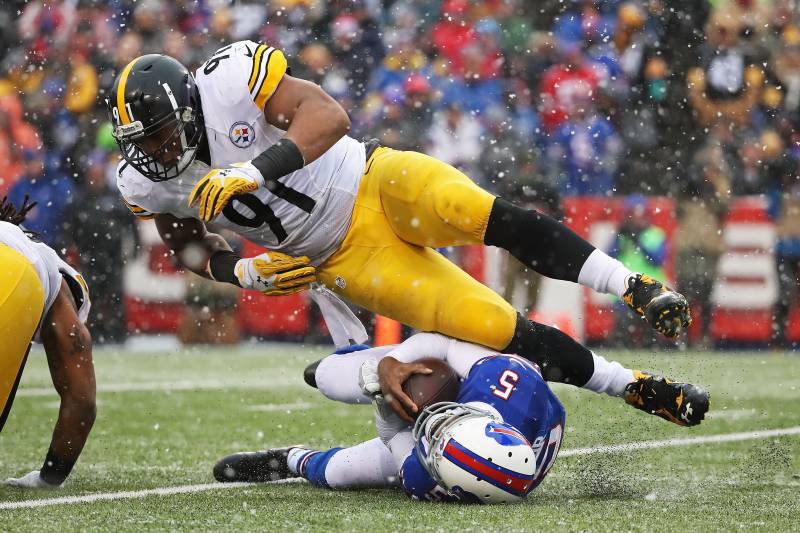 During his first two years with the Steelers Cam Heyward doubters were easy to find, but in 2013 he beat out Ziggy Hood for the starting job and since then has established himself as one of the best defensive ends in the league. Cameron Heyward has 25 sacks, 18 passes defensed and a pair of forced fumbles and fumble recoveries to his name, but staistics do not do the man justice.

Week in and week out, Cameron Heyward makes the types of plays that don’t always show up on the stat sheet – unless you count the Steelers keeping more points on the board than their opponents.

Injuries to Brett Keisel thrust Stephon Tuitt into the starting line up late in the 2014 season, and no one has looked back since. With Cameron Heyward out for the second half of 2016, Stephon Tuitt stepped up as a leader of the unit, and despite Cam’s absence, the Steelers defense improved during the latter part of the season.

If you’re surprised to discover that Javon Hargrave didn’t start the entire year, so was I. He had to wait until week to get his first start, but held on to the job from that point in the season, and established himself along side Artie Burns and Sean Davis as one of the three rookies who made an immediate impact to improve the Steelers defense.

Finding depth on the Steelers defensive line has been a challenge for Pittsburgh, forcing John Mitchell give his starters more snaps than he would like.

The Steelers have taken another step in that direction by signing free agent Tyson Alualu, a former first round pick out of Jacksonville who can play either at defensive end or a nose tackle.

Tyson Alualu’s arrival might spell the end for backup nose tackle Daniel McCullers. The Shady Tree offers and imposing physical presence, standing at 6’7” 352 pounds and his snap count percentage did jump from 9.5% in 2015 to 17.4% in 2016, which is good, but given all of the injuries the Steelers suffered on the defensive line, you’d expect to see McCullers getting even more playing time.

Injuries forced practice squad player John Maxey into the action in late in 2016 and Maxley did his part to help prove Mike Tomlin’s “The Standard is the Standard.”

The Steelers quest to rebuild their defensive line took longer than expected, although part of that is due to the longevity of Brett Keisel and Casey Hampton (although whiffing on Ziggy Hood didn’t help the cause.)

However, the rest of the defensive line responded and not only survived but thrived despite Cam Heyward’s absence. That shows that the Pittsburgh Steelers have real depth on their defensive line, and the unit got deeper with the addition of Alualu Tyson.

Let’s be clear, in the contemporary NFL, the difference between an outside linebacker and a defensive end is getting blurred by the concept of “Edge Rusher” and that’s not even taking to account that the Steelers depend on their nickel package, which includes four down lineman, all the more frequently.

However, if we’re confining our conversation to conventional 3-4 defensive lineman then the Steelers depth chart is as solid as it has been during the Mike Tomlin era, and Steelers draft need at defensive line can be considered Low-Moderate.