Since the final gun of Super Bowl LI, Steelers Nation has enjoyed?/experienced?/endured? Hundreds of hours of Mike Maycock and Mel Kipper Jr. clips, read dozens of mock drafts and perhaps even debated “grades” some scribes give to the Steelers performance in so-and-so’s latest mock.

OK, with that bit of cynicism about the excess hype that envelops the NFL Draft out of the way, let’s acknowledge that championships are built and lost on draft day.

And, as we noted when the Steelers 2016 draft class was complete, Pittsburgh is now at a point where the success or failure on draft day will determine whether Ben Roethlisberger can bring home Lombardi Number Seven.

With the urgent of the 2017 NFL Draft in mind, Steel Curtain Rising has taken stock of the needs presented by each area of the Steelers Depth Chart.

Similar to past years, the Steelers draft needs are very tired, with some fairly high urgency needs to fill up top, very little in the middle, and a lot down at the bottom.

How to distinguish between them? Well, that’s where our Steelers 2017 Draft Needs Matrix comes into play.

The purpose of the Steelers Draft Needs Matrix is to give a baseline between the Steelers areas of need should two players with the same grade become available at the same time. 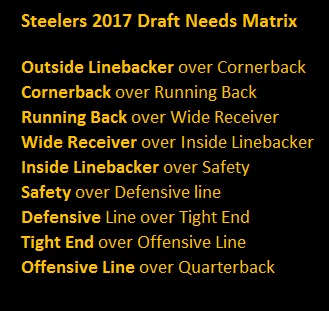 How did we arrive at this ranking? Fair question. To be honest, the Steelers needs for an outside linebacker or an “Edge Rusher” should he come in the form of a defensive end and a cornerback are both very high.

Even with James Harrison clocking in at age 39, the duo of Harrison and Bud Dupree arguably give the Steelers more on the field impact than does that of Artie Burns and Ross Cockrell.

However, anyone who would insist that Cornerback should take priority over Outside Linebacker or “Edge Rusher” wouldn’t get much of an argument for me, the Steelers need to boost their secondary as the AFC Championship so painfully illustrated.

And if Mike Tomlin, Kevin Colbert and Art Rooney II have the feeling that the next Dan Marino has dropped to them at 30, then by all means they should take him. But the reality is that isn’t going to happen, and the Steelers aren’t going to find the next Tom Brady in some later round. Given that, its best to focus on giving Ben the players he needs to win Lombardi Number Seven before he begins his “Life’s Work.”

Up until a few days ago, Steel Curtain Rising would have rated wide receiver as a higher need than running back, but Martavis Bryant‘s reinstatement changes that calculation ever so slightly. The Steelers would still be wise to add another reciever to help take heat off of Antonio Brown, but it would be wiser to invest a pick in ensuring they don’t start another playoff game with Fitzgerald Toussaint as Le’Veon Bell‘s top backup.

This chart is in no way meant to suggest the Steelers should draft for need. Quite the contrary. When you draft for need Troy Edwards (and perhaps Jarvis Jones) happen.

Clearly, Mike Tomlin and Kevin Colbert knew what they were doing.

Let’s hope that three years from now we can say the same thing about the decision the Steelers brain trust makes tonight. Until then let’s celebrate evening that will allow a select few young men to enjoy the movement they’ve dreamed of since they were old enough to hold a nerf football.