Admit it, the moment Steelers quarterback Ben Roethlisberger hinted at not returning for the 2017 season–his 14th under center–you didn’t buy into it.

I know I didn’t buy it. Like a lot of people, I thought it was just Ben Roethlisberger’s frustrations over how the 2016 campaign, one filled with Super Bowl expectations, played-out, as well as how it ended with a 36-17 thumping at the hands of the Patriots in the AFC Championship Game on January 22. 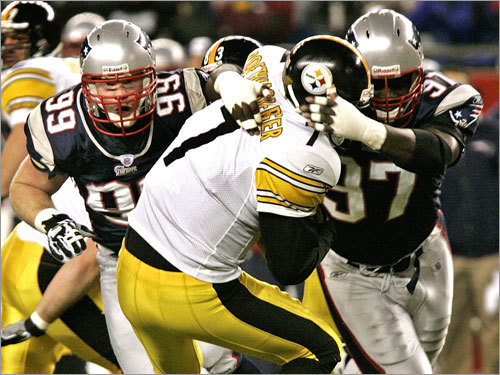 However, as March inched toward April, Roethlisbereger, even despite few taking his post-playoff hints seriously, still hadn’t declared that he was coming back next season. But as Observer-Reporter Dale Lolley and others reported on March 18, the Steelers two-time Super Bowl-winning quarterback was speaking at a conference at Liberty University on March 17, when he said he was “leaning towards” returning.

Finally, on Friday, Ben Roethlisberger took to Twitter to officially announce he’ll be back for 2017.

“Steeler Nation will get my absolute best,” Tweeted Roethlisberger on Friday, courtesy of NFL.com .

Informed the team I am looking forward to my 14th season. Steeler Nation will get my absolute best! — Ben.

So, to sort of summarize the timeline: Roethlisberger hinted at retirement during his final radio show of the season on January 24. He said he was leaning towards returning on March 17. And on April 7, some two-and-a-half months after his cryptic radio statement, he officially came back into the fold for 2017.

Is this just a matter of Ben Roethlisberger defying his “drama queen” critics by making everyone wait an inordinate amount of time before announcing his return, or is this something deeper and more serious?

While five-time Super Bowl-winning quarterback Tom Brady will be 40 by the time he appears in another meaningful NFL game, and while Peyton Manning played up until his 40th birthday, this doesn’t mean every quarterback will want to do the same.

Shortly after Roethlisberger, 35, first hinted at retirement, I was speaking with a bowling buddy and he said, “Well, maybe he doesn’t want his brain to turn to mush.”

Ben Roethlisberger plays a style of quarterback that’s different than most. His size (6’5″, 240 pounds) and willingness to keep plays alive means he takes the kind of punishment that most passers often try to avoid.

Sure, thanks to a vastly improved offensive line, Roethlisberger’s sacks and hits have decreased exponentially in recent years. However, he missed a month in 2015 with a sprained MCL; and he missed more time in 2016 with a torn meniscus that required surgery.

Add those to the many other ailments Ben Roethlisberger has suffered over  the years–sprained shoulders, sprained ankles, multiple concussions, etc.–and it’s safe to say he’ll still be dealing with the “reminders” of his pro football career, long after he really does decide to hang up his cleats.

And let’s not forget that the Pittsburgh Steelers quarterback, once known as an undisciplined partier in his younger days, is now domesticated, complete with a lovely wife and three young children.

It’s easy, as a fan, to sit back and say, “Oh, he should just play.” But it’s always important to remember that professional athletes are human beings, after all, and like everyone else, they have personal issues to deal with.

Perhaps it’s not just as simple as No. 7 being upset with his coach or some of his teammates. Maybe it’s about wanting to spend more time with his family.

The price that a football player has to pay just to get ready for a season is rather high, and that includes an abnormal amount of time time spent away from his family. Anyway, like everyone but maybe his closest friends, I have no idea what really motivated Ben Roethlisberger to hint at retirement this offseason and what took him so long to announce his return.

But given the length of time that Roethlisberger took in making his decision, one has to wonder if there will now be an annual “retirement watch” until he finally does decide to call it a career.

Either way, it certainly may put the Steelers front-office in a position of trying to balance winning now with finding Roethlisberger’s successor (or at least the one they hope will be up to the task of replacing arguably the greatest quarterback in franchise history).

Maybe this really will be Roethlisberger’s final season. Maybe he’ll play-out his current deal, which runs through 2019. Maybe he’ll reach his late 30’s and decide he wants to play this game into his early 40’s.

Only Ben Roethlisberger knows for sure, and maybe we all should start taking him more seriously.