The close of day two of the 2017 NFL Draft saw the Steelers draft James Conner running back from Pitt with their third round compensatory selection.

Dir Archer turned out to be a veritable head case, but the Steelers can rest assured that James Conner won’t follow in his footsteps. It remains to be seen if Conner can deliver in the NFL, but the man’s character and work ethic are above reproach, as he bounced back from Hodgkin’s lymphoma in 2015 to lead the Pitt Panthers rushing for 1,092 yards and 16 touchdowns in 2016. 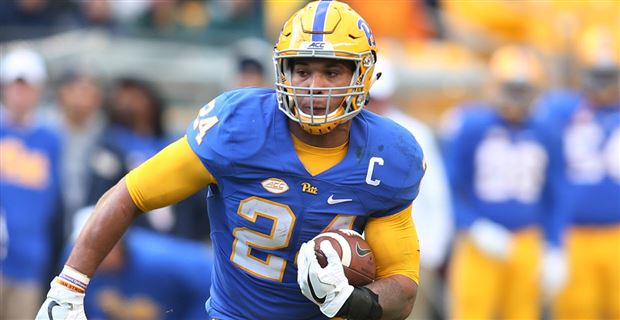 Hearing his name called by the Pittsburgh Steelers is a dream come true for Connor, who in addition to being a standout for Pitt, is an Erie native who played at McDowell High School.

James Connor will provide an immediate boost to a running back depth chart that has struggled to keep two starting caliber running backs healthy since the 2011 season. Le’Veon Bell will remain the uncontested starter, but after Bell the Steelers only have Fitzgerald Toussaint and Knile Davis behind him, a duo whose collective yards-per-carry average is 3.15.

James Conner described getting drafted by his hometown team as:

It’s a dream come true. I’m forever grateful to them for giving me the opportunity after everything I’ve been through. I know a lot of teams were scared, but they gave me the opportunity of a lifetime, and they are going to get a great person and a great football player, and I’ll give it my all for them.

The Steelers were expected to go for a running back early in the 2017 NFL Draft and Conner’s third round selection all but confirms what has been obvious for a while, DeAngelo Williams is not in Pittsburgh’s plans for 2017.

The Steelers have drafted over 46 players from the University of Pittsburgh, but have not taken a Panther in the NFL Draft since choosing Hank Poteat in the 2000 NFL Draft.

That’s a far cry from the 1980’s, when the Steelers took 6 Pitt Players in the draft, including 3 in the 1989 NFL Draft in the form of Tom Ricketts, Jerry Olsavsky and Carlton Haselrig who was a Pitt-Johnstown graduate.