Memorial Day weekend has arrived, and with it the unofficial beginning of summer. Neighborhood pools are opening, kids are looking towards the end of school, backyard barbecues are getting fired up and…

While the Steelers still have a few more weeks of OTA’s and minicamp, we’re rapidly approaching the one time of the year when there really is no real football news to be had. Once upon a time that was the norm, form February to March, with the exception of the NFL Draft. But the world’s changed, and Steelers Nation now demands its dose of Steelers news on a daily basis.

Every off season since this sites founding, yours truly has thought fill the void with reviews of the books we’ve read on the Steelers. Well, that hasn’t happened yet, and probably won’t happen this year. But this year we thought we’d take a mini-step in that direction by publishing our Steelers Summer Reading Poll, with capsule summaries of each of the books in our library.

Take a look at the list below and vote for your favorites:

Dan Rooney’s self-titled autobiography is a must read for any serious Steelers fan and includes all kinds of insights, including the revelation that Dan, haunted by missing out on Dan Marino, push to draft Ben Roethlisberger.

Ruanaidh has been described as a giant love letter by Art Rooney Jr. to his father. That’s accurate. Another excellent “Fly on the Wall” read from a man who helped architect the Pittsburgh Steelers rise from NFL doormat, to the best football team the league has or ever will see.

Sports Illustrated once described Myron Cope as the soul of the Pittsburgh Steelers and here the Steelers soul tells his tale in Double Yoi a book filled with insights about various Pittsburgh Steelers from the glory years until the Kevin Colbert and Bill Cowher Era including chapters devoted to Terry Bradshaw, Kordell Stewart, Dwight White and Ernie Holmes.

Pomerantz give a detailed look at the Life and Times of Joe Greene, Mike Webster, Franco Harris and the rest of the Super Steelers. While Pomerantz clearly holds deep admiration for his subjects, the author pulls no punches with frank discussions of the toll that steroids and head trauma took and continue to take on Pittsburgh’s heroes.

His Life’s Work is one I’ve only thumbed through, but Michael MacCambridge’s work is the first and certainly to be the only authorized biography of Chuck Noll. One only needs to glance through this historic book to see that MacCambridge has unearthed unparalleled insights into the man known as the Emperor while unearthing a trove of facts about his time with the Steelers.

Steeler Nation documents the road trip Jim Wexell took in 2007 in a quest to understand the phenomenon that is Steelers Nation and is truly a work of art. His interview with legendary Steelers linebacker Greg Lloyd is worth the purchase price alone.

In The Ones Who Hit the Hardest Chad Millman and Shawn Coyne prove that sports books can go a level deeper, as they detail the Steelers and Cowboys rivalries by comparing the two team’s on the field rivalry with the social and economic transformations that both communities were experiencing in the 1970’s. Click here for a full review by Behind the Steel Curtain founder Michael Bean.

Cowher Power is a compilation of articles published by the Pittsburgh Post-Gazette from 1992 to 2005, published by the newspaper following the Steelers victory on Super Bowl XL. A nice table book which unfortunately contains more than a few factual errors which really weaken its quality.

From Black to Gold is the only book on this list to get a full review here. Written by Tim Gleason, aka Mary Rose from the Golden Age of Behind the Steel Curtain, From Black to Gold is an excellent book that succeeds in covering ground that professional writers have missed. 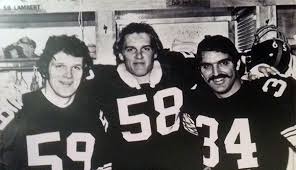 Andy Russell’s A Steeler Odyssey balances tales of the Pittsburgh Steelers transformation under Chuck Noll, with stories about Russell’s travels around the world with Ray Mansfield, Lynn Swann, and Mel Blount as well as Russell’s stories about his attempts to build his business. Another book that is a worthy investment of your time and money.

Dawn of a New Steel Age is the book Pittsburgh Post-Gazette writer Ed Bouchette wrote during the crippling 1992 Pittsburgh newspaper strike which describes the end of the Chuck Noll era and the beginning of Bill Cowher’s reign, including profiles on players such as Hardy Nickerson, Rod Woodson, and Neil O’Donnell. In the late 1990’s I saw a review of this book that described it as “The best insider book ever.” The observation is probably more correct today than it was then.

Dare to Dream and Keep the Faith were penned in 1996 and 1997 by Jim O’Brien and contain stories both about the Steelers from the Cowher-Donahoe era as well as stories about the Super Steelers. O’Brien’s book, The Chief, tells the story of Art Rooney Sr. though the words of those who he touched, and includes rare profiles of Tim, John and Patrick Rooney.

Just Watch the Game by John Steigerwald goes into detail about all three major Pittsburgh sports teams and its media landscape. Steigerwald pulls no punches and pointedly refuses to genuflect at the altar of political correctness. Even if you disagree with much of Steigerwald’s political world view, he offers valuable insights on the Steelers and he is an accomplished writer.

Matt Lode’s 100 Things that Every Steelers Fans Should Know and Do Before They Die’s title is self-explanatory. It also lists Steel Curtain Rising as one of the best Steelers blogs out there, so that alone makes it a great book!

There are obviously a lot of other books written about the Pittsburgh Steelers, some good, some bad and some in between. Please take a moment to share your Steelers summer reading recommendations either by writing your choices in the poll or leaving a comment.