Like most Pittsburgh Steelers fans who were teenagers in the mid-to-late 80’s, I wanted my very own jersey.

Of course, the problem with that time in Steelers history, is they were pretty awful. Less than a decade after guys like Mean Joe Greene, Terry Bradshaw and Franco Harris were doing things on the turf of old Three Rivers Stadium that would forever make them immortals, Pittsburgh’s professional football roster was full of mere mortals, especially during a stretch from 1985-1988, when the Steelers went a combined 26-37 and didn’t make the playoffs once.

Receiver Louis Lipps, the 1984 NFL Offensive Rookie of the Year and two-time Pro Bowler, was the obvious choice. Believe it or not, kicker Gary Anderson, by that point, also a two-time Pro Bowl player, would have been a pretty decent choice (told you the roster was filled with mere mortals in those days). 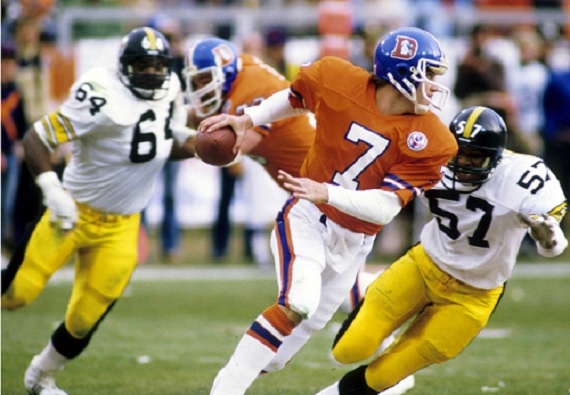 But while Louis Lipps and Gary Anderson were certainly some of the very few stars  for the Steelers of that era, perhaps the most shining one was outside linebacker Mike Merriweather.

A third round pick out of the University of Pacific in  the 1982 NFL Draft, Mike Merriweather ascended to the top of the depth chart of Pittsburgh’s transitioning defense in 1983, starting 16 games, but only recording a half a sack.

The following season, however, Mike Merriweather would burst onto the NFL scene in a big way, as he totaled 15 sacks (a team record that stood for 24 years until fellow outside linebacker James Harrison broke it by one in 2008 – although Kevin Greene did briefly tie the record in 1994 only to see the sack negated on a penalty) and made his first Pro Bowl.

Mike Merriweather couldn’t duplicate his ’84 sack barrage in subsequent years, recording a combined 15.5 between ’85-’87, but he still performed at a high enough level to make two more Pro Bowls. And in 1987, his first-team All Pro honor matched the ones he received in 1984 and 1985.

With those years as a backdrop, it was easy to see why I decided to go with MIke Merriweather’s No. 57 jersey for my Christmas present for the 1987 holiday season.

Tenth grade was a different story. I still wore the jersey to school, but I received mocking comments such as, “Where’s your boy, Merriweather?”

Sadly, while the Steelers were enduring a 5-11 season in 1988 (their worst record since 1969), Mike Merriweather wasn’t around to help, as a contract dispute with the team led to a season-long holdout.

Like his counterparts of the 80’s, No. 57 Mike Merriweather’s chief sin was to merely good instead of great. Photo via: Ciudaddeacero.com

Unfortunately for players of that era like Merriweather, who was clearly capable of performing at an elite level, their only choice was to suck it up and play for whatever compensation their teams thought they deserved.

With neither side willing to budge from their position, the Steelers shipped Merriweather to the Vikings in the even of the 1989 NFL Draft in-exchange for their first round pick (24th, overall).

Mike Merriweather never matched his prolific years in Pittsburgh, as he played a few seasons with the Vikings before finishing his career with both the Packers and Jets in 1993.Who knows what may have happened if Merriweather and the Steelers would have reached a financial agreement in ’88?

That’s a tantalizing possibility, but Steelers Digest editor Bob Labriola once chided a fan who complained about the Steelers unwilingness to pay Merriweather by reminding them that his absence in 1988 allowed Chuck Noll and Tony Dungy to get Greg Lloyd on the field. And for as good as Merriweather was, Lloyd was beter.

We do know many great outside linebackers have played for the Steelers since–including Greg Lloyd, Jason Gildon, Joey Porter, LaMarr Woodley and Harrison.

Yes, the Steelers lineage at outside linebacker is exceptional (let’s not forget about Jack Ham and Andy Russell), but Mike Merriweather was a good one, too.

He was just a bad choice for a football jersey.