It seems every time the Penguins experience a run of success, as they are right now–a run that includes back-to-back Stanley Cup victories, following a 2-0 victory in Nashville over the Predators Sunday night–people like to entertain the topic.

What topic am I talking about, you ask?

On talk radio last week, Dejan Kovacevic, filling in for the popular and controversial Mark Madden, threw that thought out there and basically agreed with it.

At this very moment, the Penguins are the number one team in town; how could they not be?

They boast some of the NHL’s and hockey’s greatest players–including Sidney Crosby and Evgeni Malkin–and, as previously mentioned, Lord Stanley will be paraded around Pittsburgh for a second consecutive summer.

Also, with the drafting of the legendary Mario Lemieux in 1984, the Penguins forever changed the fortunes of their previously downtrodden franchise and have won a total of five Stanley Cups since the summer of 1991.

Over the past three-plus decades, the Penguins have gone from a laughingstock of an organization, to hockey royalty.

If you’re a Steelers fan, you obviously know the legacy that was forged in the 1970’s that was jump-started by the hiring of head coach Chuck Noll in 1969 and the drafting of defensive stalwart Mean Joe Greene almost immediately afterward. 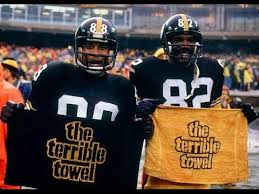 With the help of nine future Hall of Fame players (Jack Ham, Jack Lambert, Franco Harris, Mel Blount, Terry Bradshaw, Lynn Swann, John Stallworth and Mike Webster), the Steelers went from an also-ran in the early’70’s to the class of the NFL by the end of the decade.

Here we are, nearly five decades into the Steelers run of football supremacy, and there are no true signs of this love, this passion the fans have for the team dissipating anytime soon.

Sure, it might seem that way, considering the Penguins have won three Stanley Cups since the last time the Steelers hoisted a Lombardi, following their 27-23 victory over the Cardinals in Super Bowl XLIII, some eight years ago.

But all one needs to do is examine the TV ratings–both locally and nationally–to see that the Penguins have a ways to go before they supplant the Steelers for local sports supremacy.

As USA Today pointed out on Tuesday, NBC, the network with the rights to the NHL regular season and Stanley Cup playoffs, is doing cartwheels for the ratings the six-game final between Pittsburgh and Nashville drew.

What was the average for those six games? A 4.76, or almost two points lower than Last Man Standing, a Tim Allen sitcom that recently made the news after being canceled by ABC.

OK, yes, I just pointed out that football is still king in America, and that its signature event is watched by almost half the country, while hockey’s marquee series is watched by the same amount of people who would tune in to watch a middling TV show on Friday night.

What about the local ratings for the finals?

But when you examine some of the Steelers’ recent local regular season TV ratings, you may start to get a sense for just how popular they still are.

According to a TribLive article from January of 2014, that came on the heels of a playoff-less and 8-8 2013 season that included starts of 0-4 and 2-6, the Steelers averaged a 38.2 local rating, which was pretty much on par with what the Penguins generated in Game 6 of the Stanley Cup Final this past Sunday.

And when you examine the Steelers most-recent playoff win–an 18-16 victory over the Chiefs at Arrowhead Stadium in the divisional round on January 15–you may wonder if NBC, the network that broadcast the game, has already contacted head coach Mike Tomlin about starring in his very own sitcom: First Down Family…Obviously.

Sure, the game was moved into primetime due to weather concerns in Kansas City, but it doesn’t lessen the impact the Steelers and the NFL have on the country and the City of Pittsburgh.

So, what am I saying?

The organization did a great job years ago by marketing the team to young fans–don’t know how many young millennials are huge Penguins fans.

However, while Pittsburgh started to develop a bit of a hockey culture after the Penguins drafted Mario Lemieux 33 years ago, it was almost as if the Pittsburgh of pre-1970, with its blue-collar work-ethic, was a football town waiting for a team to embrace.

The Pittsburgh Steelers became that team in the early-1970’s, and it appears as if no one–not even the five-time Stanley Cup Champion Pittsburgh Penguins–will knock them off the top perch anytime soon.