It wasn’t the prettiest performance for the Pittsburgh Steelers, who opened the Heinz Field portion of their 2017 preseason schedule against the NFC Champion Falcons Sunday afternoon at 4 p.m., but in the end, they left with a 17-13 victory, thanks to special teams heroics and a second half shutout by the defense.

Matt Ryan started at quarterback for Atlanta, and on his one and only offensive series, he led a 10-play, 91-yard drive that culminated in a five-yard touchdown run by Terron Ward to give the Falcons a 7-0 lead midway through the first quarter.

Following Jordan Berry‘s second punt to open the game, veteran quarterback Matt Schaub replaced Ryan before quickly exiting with what appeared to be a hand injury. In his place, third-string quarterback Matt Simms directed the Falcons the rest of the drive, which ended with a 23-yard field goal by veteran kicker Matt Bryant and a 10-0 lead for the visitors.

Pittsburgh’s next drive resulted in its only points of the first half, as third-string quarterback Joshua Dobbs, starting in place of veteran Ben Roethlisberger and injured backup Landry Jones, led the offense on an eight-play, 54-yard drive that resulted in a 42-yard field goal by Chris Boswell that cut Atlanta’s lead to seven points.

The big play on the drive was a 23-yard hookup between Dobbs and receiver Martavis Bryant, who made his 2017 preseason debut after being reinstated by the NFL following a year-long suspension for violating the league’s substance abuse policy.

However, the Steelers special teams provided some sparks near the end of the first half.

After nearly blocking a punt on Atlanta’s penultimate drive of the second quarter, fullback and special teams ace Roosevelt Nix did one better by blocking a punt on the final play of the first half, as both teams headed to the locker room with the visitors ahead, 13-3.

Overall, it was a pretty bleak first half by the home team, as Atlanta racked up 259 total yards to Pittsburgh’s 76–including 211 vs. 58 through the air.

The two teams exchanged punts on the first four possessions of the second half, but the Steelers soon closed to within three points on Atlanta’s third possession, thanks to a 64-yard punt return by reserve running back Trey Williams, whose only shot of making the squad may be on special teams.

Following an interception on an ill-advised decision by Dobbs, who was trying to shuffle a pass to tight end Jake McGee while being taken to the turf on a third and short play, second-year safety Jordan Dangerfield provided some heroics by picking off Simms on Atlanta’s very next play to help preserve a three-point deficit.

Early in the fourth quarter, the Falcons faced a third and long from their own six-yard line. As he was about to be taken to the end zone turf by a blitzing Mike Hilton, Simms unleashed a pass that appeared to land short of the line of scrimmage. However, instead of a safety, the officials ruled the play incomplete because Simms’ pass hit a Steelers player before fluttering innocently to the ground.

No problem, as fourth-string quarterback Bart Houston directed the offense on a seven-play, 53-yard drive that resulted in a six-yard touchdown to receiver Justin Hunter, a free-agent acquisition in the offseason, who had turned some heads in the early stages of training camp. 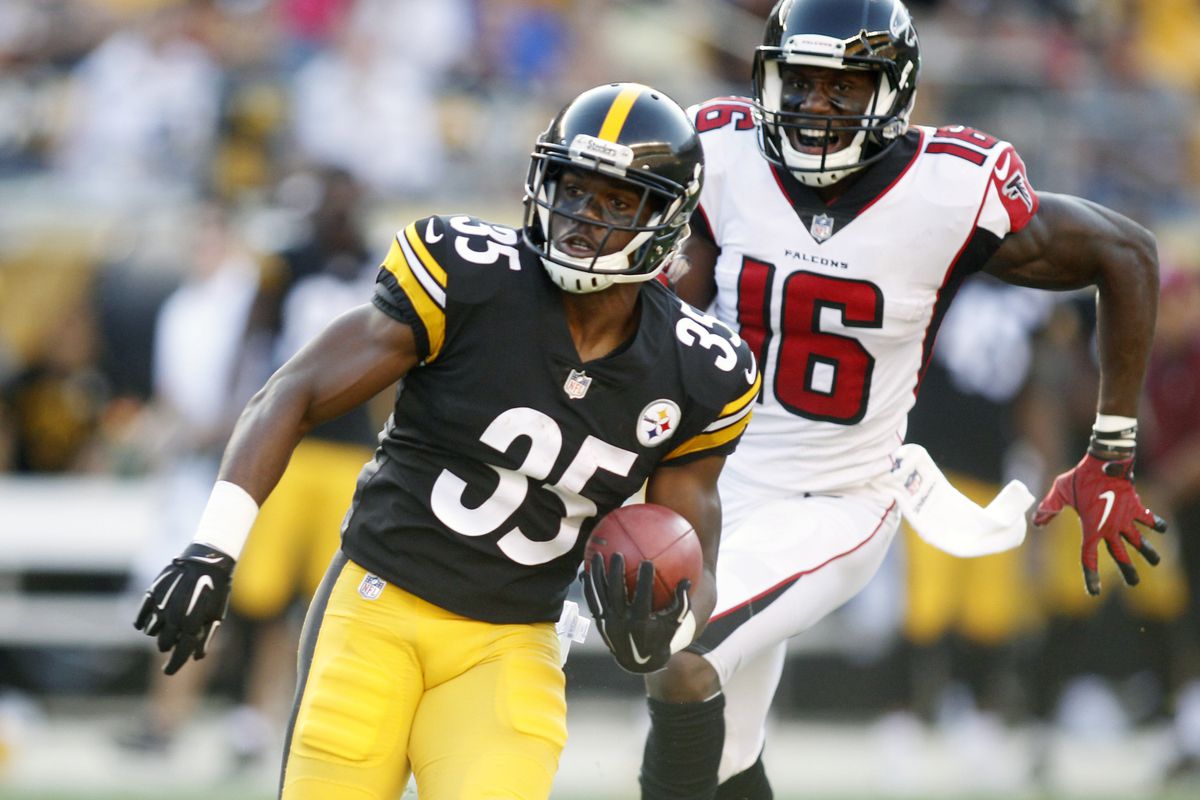 Trey Williams’ punt return helped brak the game against the Falcons. Photo Credit: Behind the Steelcurtain

The final crucial play of the game occurred with 2:14 remaining when a pass from Falcons’ fourth-stringer
Alek Torgeson bounded off the hands of his intended receiver and into the waiting arms of Jordan Dangerfield, who recorded his second interception of the day and all but wrapped up Pittsburgh’s second preseason victory.

In addition to Dangerfield and Williams, other stars of the game included reserve outside linebacker Anthony Chickillo, who recorded two sacks; and feel-good story, James Conner, as the rookie third round pick out of the University of Pittsburgh returned to his college home and carried the football 20 times for 98 yards.

As for the rookie Joshua Dobbs, his day was rather uneventful, as he completed 10 of 19 passes for just 70 yards, no touchdowns and the one interception.

Next up for the Steelers is a tilt against the Colts, as they close out the home portion of their preseason schedule next Saturday night at Heinz Field.