The Steelers activated Sammie Coates from the PUP this week, allowing him to practice with the team during training camp for the first time this summer. Suffice it’s been a long strange trip for Sammie Coates.

It was just two years ago that the Steelers turned heads during the 2015 NFL Draft when the drafted Sammie Coates in the 3rd round. Using such a high value pick on a wide receiver struck the fan base as odd, given that they had Darrius Heyward-Bey, Martavis Bryant had shown as a rookie Markus Wheaton had bounced back from injury marred rookies season and Antonio Brown was, well, Antonio Brown. 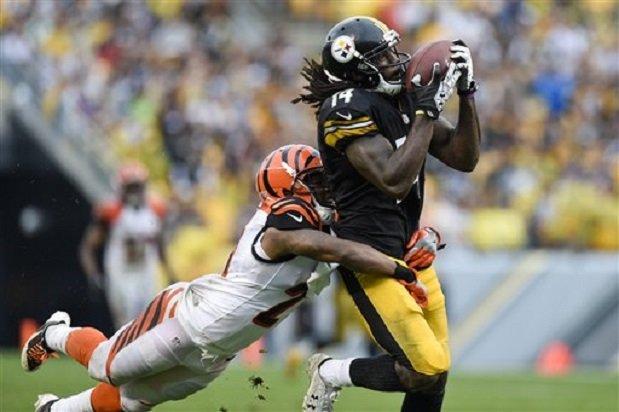 Darqueze Dennard’s no match for Sammie Coates in the Steelers 2016 win over Cincinnati. Photo Credit: AP, via Al.com

Nonetheless, during the first half of the season, Sammie Coates was best known for a failed fourth down hookup with Mike Vick during the Steelers 2015 loss to the Ravens. You didn’t see much after that to the point that when reporters touted Sammie Coates potential heading into the Steelers AFC Divisional Playoff game against the Broncos, this site begged to differ, arguing that DHB was the man to watch.

When news of Martavis Bryant’s next suspension broke, all eyes turned to Sammie Coates. While no one went so far as to say that Coates could make fans forget about Martavis Bryant, many did expect him to emerge as Ben Roethlisberger’s number 2 target.

With and Eli Rogers, Cobi Hamilton, Demarcus Ayers and an injured Darrius Heyward-Bey the only downfield options opposite Antonio Brown, Todd Haley and Mike Tomlin were forced to lean heavily on Le’Veon Bell. That strategy served the Steelers well until the AFC Championship game, which not ironically saw the Steelers first possession end on a bomb that Sammie Coates dropped that, had he caught it, could have dramatically altered the dynamic of the game.

Sammie Coates knee surgery couldn’t have come at a worse time. Antonio Brown, Martavis Bryant, and JuJu Smith-Schuster are roster locks, and one would have to figure that either Justin Hunter and/or Eli Rogers is guaranteed to make the team.

It says here that Sammie Coates is far more talented than any of those players. But it’s also true that all of them were far more productive down the stretch last season than Coates, injuries or no. His performance in the Steelers final three preseason games will show whether Sammie Coates really fits in Pittsburgh.