Pittsburgh Steelers fans will gather at Buenos Aires’ Obelisco on Sunday September 3rd as part of the #SteelersWorldWide Photo.

Think Big, start small. I’d like to say that’s how all of this got started. And, in some ways it is true, because this movement goes way beyond what any one Pittsburgh evangelist could ever hope to do.

Opening those new horizons meant switching jobs, switching languages, switching transport modes, swapping suburban living for city life and giving up a fair number of comforts in a quest to gain something new, something unique. Those were all challenges I was happy to make.

That was giving up the ability to watch the Pittsburgh Steelers. From Steelers 1994 season until the 2000 you could count the number of Steelers games I missed on one hand. When the decision to head south came up, a friend of mine asked once while at Baltimore’s legendary Purple Goose Saloon, founding HQ of the Steelers Fan Club of Maryland, “So what are you going to do about the Steelers?”

As he later recounted the story to someone else, relaying, “When I asked him that, he actually paused….”

Back in 2001, NFL Sunday Ticket was a included in DirectTV Argentina’s standard offering, but DirectTV was well beyond an English teacher’s means. High speed internet and streaming were years away, certainly when measured in budget terms if not in terms of technology. So be it. You take the good with the bad.

So I resigned myself to the reality that for the next portion of my life I’d be following the Steelers by hurriedly loading Pittsburgh Post-Gazette articles into memory on a dial up modem, and watching Monday Night and Sunday Night games broadcast on tape delay at 2:30 am on ESPN. But I also remained determined to do what I could to spread the word about the Black and Gold to anyone who was interested.

One of the things I noticed about porteño culture celebrate the triumphs of their soccer teams by posting flags whether they root for Boca, River, Racing, San Lorenzo, or Velas Sarfield. So on the opening day of the Steelers 2001 training camp, with permission of my hosts, hung my Steelers flag on the terrace of the home I was living in. My Argentine “Aunt and Uncle” were amused by it.

Times change. Before Steel Curtain Rising was founded, I’d do post-game summaries by email signing off on as “President, Pittsburgh Steelers Fan Club of Buenos Aires” which was a club of one.  Although it took me until the Steelers win in Super Bowl XLIII, I’ve met and befriended several other Steelers fans here in Buenos Aires. And our movement is gaining momentum…. 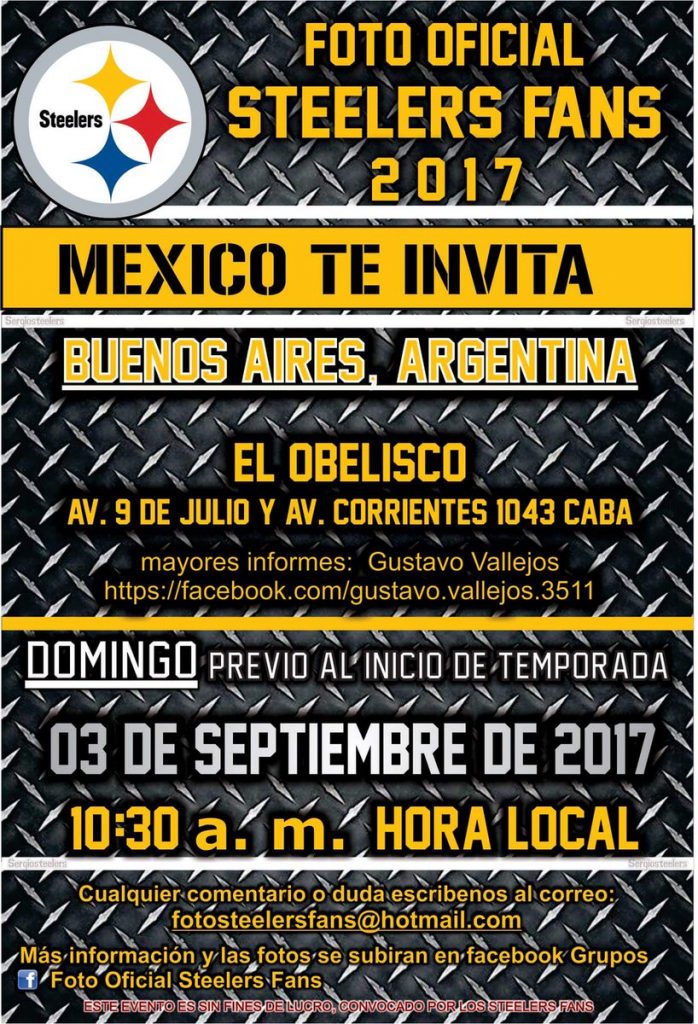 The movement is growing, and on Sunday September 3rd, Steelers fans in Buenos Aires will gather at the Obelisco to take a group picture. We’re starting bright and early at 10:00 am. Bring your Steelers gear.

Bring your terrible towels and, as we await the first Steelers regular season opener to feature Ben Roethlisberger, Le’Veon Bell, Antonio Brown and Martavis Bryant on the field at the same time, let’s show the world that Steelers Nation’s Latin America contingent stand united from the Rio Grade to the Tierra Del Fuego!