They say a win is a win, but after watching his team’s sloppy performance in a 21-18 Week 1 victory over the Browns at FirstEnergy Stadium on Sunday, I’m not so sure Steelers head coach Mike Tomlin would agree with that sentiment.

Just how sloppy was the performance? In addition to posting just 290 yards in total offense, the Steelers committed 13 penalties for an astounding 144 yards–including several personal fouls on the defense and three holding calls on offense that wiped out what could have been momentum-building drives.

With the way the game started out, however, it looked like it would be a cake-walk for the visitors.

After the Steelers forced a quick three-and-out, second-year inside linebacker Tyler Matakevich raced up the middle virtually untouched to block the Browns punt, and it was recovered in the end zone by outside linebacker Anthony Chickillo to give the Steelers a quick 7-0 lead. 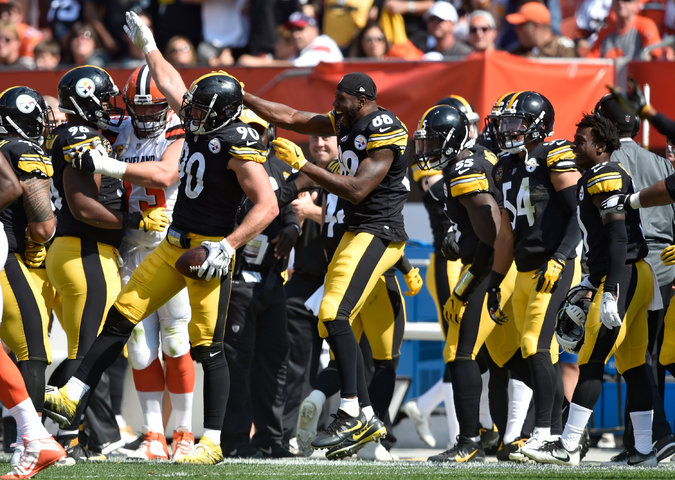 T.J. Watt after his first interception in his rookie debut. Photo credit: The New York Times

Unfortunately, the Steelers offense struggled right out of the gate, netting minus-six yards on its opening drive.

Cleveland quickly responded, by marching 68 yards on 12 plays and tying the game on a one-yard touchdown run by rookie quarterback DeShone Kizer, who made his first start on Sunday.

Pittsburgh’s vaunted offense, led by quarterback Ben Roethlisberger, receiver Antonio Brown and running back Le’Veon Bell, seeing his first action after holding out all of training camp, continued to struggle, only gaining 41 yards through a quarter-and-a-half of action.

However, facing a second and eight from the 11-yard line, late in the second quarter, Pittsburgh’s offense got a bit of a spark, when Brown managed to hold on to a deflected pass and raced 50 yards down to the Browns’ 39.

Five plays later, the Steelers took a 14-7 lead on a four-yard strike from Roethlisberger to third-year tight end Jesse James.

The Steelers offense continued to go backwards on the opening drive of  the second half, netting negative eight yards, following a sack on Roethlisberger.

The Browns responded by driving 53 yards on seven plays and cutting Pittsburgh’s lead to four points on a  Zane Gonzalez 24-yard field goal to make it 14-10.

The Steelers then drove 75 yards on six plays and went ahead 21-10 on James’ second touchdown catch of the day, this one for two yards.

The drive was aided greatly by a 41-yard pass interference penalty on Browns’ cornerback Jamar Taylor, who was called for grabbing the arm of Brown on a deep sideline pass.

Pittsburgh’s defense appeared to stymie the Browns on their next offensive possession. However, after an incomplete pass on third and 18, cornerback William Gay was called for unnecessary roughness on a hit to receiver Ricardo Louis.

As for the flag, it came in very late, and even though Louis was forced to the sideline for a medical evaluation, replays seemed to show Gay contacted the receiver with his shoulder and didn’t lead with his helmet.

Later in the drive, following yet another unnecessary roughness call–this time on rookie outside linebacker T.J. Watt following a sack by Chickillo–Kizer lofted a short pass down the left sideline that was picked off by Watt, who jumped high in the air to corral the football, before returning it 17 yards.

Unfortunately, despite the offense marching to the Cleveland 29-yard line early in the fourth quarter, the Steelers couldn’t salt the game away, and a Roethlisberger pass intended for receiver Martavis Bryant was intercepted by Browns’ safety Derrick Kindred.

Late in the game, the Browns drove 73 yards on eight plays and inched to within three points, thanks to a three-yard strike from Kizer to receiver Corey Coleman on fourth and two, followed by a two-point conversation by running back Isaiah Crowell.

But facing a second and 12 from their own 18-yard line, the Steelers were able to put the final nail in the coffin, thanks to Brown, who, while being triple-teamed, jumped up to secure a 38-yard pass from Roethlisberger at the 2:28 mark.

Cleveland head coach Hue Jackson challenged that Brown didn’t maintain possession of the catch all the way through the tackle and lost said challenge, leaving his team with zero timeouts, and Pittsburgh ran out the clock to start 1-0 for the second-straight year.

For the day, Brown caught 11 passes for 182 yards, while James pulled in six passes for 41 yards and those two touchdowns.

Roethlisberger completed 24 of 36 passes for 263 yards, two touchdowns and one interception.

On the defensive side, the Steelers allowed a respectable 237 yards and recorded a rather robust seven sacks–including two apiece for Watt and Chickillo.

Next up for the Steelers is their 2017 Heinz Field debut against the Vikings next Sunday afternoon at 1 p.m.