So  Le’Veon Bell has reported to the South Side and ended his holdout. Surprise, surprise. The Pittsburgh Steelers vs Le’Veon bell was never going to come down the the franchise running back opting to leave 12 million dollars in cash on the table to go while he worked Dairy Queen, was it? No, it wasn’t. Instead Le’Veon Bell signed his franchise tender and allows the Steelers to start the season with the foursome of Bell, Ben Roethlisberger, Antonio Brown and Martavis Bryant.

Le’Veon Bell has of course become a lightning rod for fan criticism. Tony Defeo has already authored this site’s position on Bell’s holdout, Defeo doesn’t care and neither should you. Fair enough. But if I can’t get fired up one way or another about his holdout, Bell’s predicament is truly fascinating for what it tells us about the state of running backs in the modern NFL.

Does Le’Veon Bell have it in him to revive the concept of “Franchise Running back” in today’s NFL? Photo Credit: Chaz Palla, Tribune-Review

In today’s NFL, the Franchise running back is a quaint, if not outright antiquated concept.

Yet, long before he broke the Steelers regular season and playoff single game rushing records – something Hall of Famers John Henry Johnson, Franco Harris, and Jerome Bettis never did – we suggested that Le’Veon Bell was one player who could potentially revive the franchise running back.

Per press accounts, the Steelers offered Le’Veon Bell a deal that averaged 12.2 million per year, which called for Bell to get about 30 million in his first two years. Not only would that have made Bell the NFL’s highest paid running back, it was 50% more than the annual averages made by next two highest running backs Devonta Freeman and LeSean McCoy, if Over the Cap is to be trusted.

Yet, in Le’Veon Bell’s eyes, it wasn’t enough. Bell pointed to his pass catching numbers, and asked to be paid as a receiver. He’s got a strong argument there, but truthfully if Le’Veon Bell really wanted to be paid what he is worth, he should have asked for a time machine to take him back 20 years or so….

In the 1990’s the NFL boasted a several legitimate franchise running backs. I can remember at the end of college, arguing that Barry Foster deserved to be considered as a franchise running back alongside Emmitt Smith, Barry Sanders, Marshall Faulk or this rookie in Los Angeles named Jerome Bettis.

Laugh at my love for Foster if you will, (I’ll still argue he had the talent, but lacked desire and durability) but no one would argue with the other four, who own six Super Bowl rings between them.

The 1990’s didn’t just give us four undisputable franchise running backs; it also gave us the salary cap. While making meaningful apples-to apples-comparisons between players from different eras is as fun as it is impossible, the salary cap let us see how much those players respective teams valued their services. 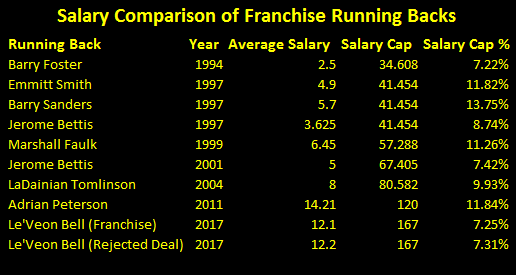 A note about methodology to fellow arm-chair NFL salary capologists. Gathering consistent contract numbers isn’t easy. It was actually easier to get salary numbers on players from the early 1990’s than it was to get numbers on LaDainian Tomlinson (until we discovered his was listed on over the cap.)

Let’s also agree that the total contract value numbers along with average annual salaries are terribly relevant to a lot of conversations about player salaries, because even in the 1990’s the last several years of a contract frequently had base salaries that both the team and the agent knew would never find their way into the player’s pocket.

Fair enough. But the average salary figure does give us a decent measure to gauge how much of its precious salary cap resources a team is willing to devote to one player.

Barry Sanders got the largest chuck of the pie available to him, with the Lions giving him almost 14% of their cap in 1997. Emmitt Smith wasn’t too far behind, getting almost 12% of the Cowboys cap. The difference there is perhaps explained by the fact that Barry Sanders was the Lone Star on his team, while Smith had to share his Den with two other Hall of Fame bound triplets (pun intended).

Two years later Marshall Faulk got 11% of the Rams cap. Five years later LaDainian Tomlinson was able to get almost 10% of the Chargers cap, and even as late as 2011, the Vikings were still willing to give Adrian Peterson 11% of their cap.

Jerome Bettis’ salary cap percentages seem rather pedestrian by comparison, and that leads me to wonder if the numbers out there are in fact accurate (although Bettis did take less money to stay in Pittsburgh in 1997 and perhaps in 2001 as well.) Still, even in 2001, at age 29, the Steelers were still willing to devote a slightly larger portion of their salary cap towards keeping the Bus parked in Pittsburgh, than they are (or were) to keeping Le’Veon Bell in the Steel City.

Indeed, in this salary cap percentage comparison, Le’Veon Bell barely comes out ahead of Barry Foster (who for the record, was only included this table for comparison’s sake.)

While Le’Veon Bell’s contract situation clearly shows how little the NFL values running backs in 2017, there are mitigating circumstances. Clearly, Le’Veon Bell has talent that makes him truly special, but in each and every season he’s missed games either to injury or suspension.

If press reports are correct and the first two years of Le’Veon Bell’s deal would have paid him 30 million dollars, then he’s left 6 million dollars on the table, assuming the Steelers franchise him again in 2018 (which could be complicated, the capologist assure us), in search of a larger pay day come 2019.

That’s a fairly a large risk, but it’s a gamble Le’Veon Bell has the right to make on himself. If Le’Veon Bell can continue his Hall of Fame level production through 2017 and 2018 while avoiding injury and suspension, more power to him.

But even then, when he’s 27 years old, Le’Veon Bell’s unlikely to find a team willing to offer him a contract that commands the kind of cap space that the Sanders, Smiths and Petersons once commanded.

Fairly or unfairly, Le’Veon Bell is and will likely remain a franchise running back trapped in the wrong era.