Running back Le’Veon Bell continued his mastery of the Chiefs, rushing for 179 yards and a touchdown on 32 carries, as the Steelers improved to 4-2 with a very impressive and important 19-13 victory over the Kansas City Chiefs at Arrowhead Stadium on Sunday.

Pittsburgh notched its first points of the afternoon courtesy of Kansas City’s center, who sailed a shotgun snap high and wide of quarterback Alex Smith, who vainly chased it out of the back of the end zone to give the visitors a 2-0 lead early in the first quarter. 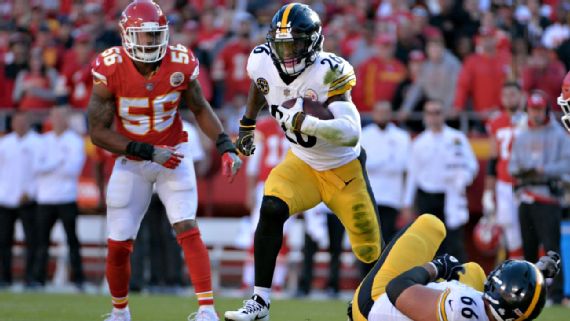 However, on the Chiefs subsequent free kick, Antonio Brown and JuJu Smith-Schuster treated it  like a punt, allowing Kansas City to recover at the Pittsburgh 32.

Bell and the Steelers answered immediately, marching 75 yards on 12 plays and taking a 9-3 lead on Bell’s three-yard touchdown on the first play of the second quarter.

The defense continued to hold firm throughout the first half, including after an interception by Chiefs cornerback Marcus Peters at a 48-yard line that came after Antonio Brown stopped running on what should have been a slant-pass from quarterback Ben Roethlisberger.

Starting from his own one-yard line, Roethlisberger found tight end Vance McDonald for a 26-yard gain, that not only gave the Steelers some breathing room, it jump-started their most impressive drive of the day.

Eight plays later, the Steelers had it first and goal from the two, following a 17-yard scamper by Bell. Unfortunately, the red zone woes continued, as Pittsburgh had to settle for a Chris Boswell field goal and a 12-3 halftime lead.

Just how dominant was Pittsburgh’s first half performance?

Le’Veon Bell continued to dominate in the second half, as did the Steelers defense, allowing just 14 yards on Kansas City’s first two offensive series of the third quarter.

However, on the Chiefs’ third second half possession, they put together an impressive drive and eventually had a first and 10 from the Pittsburgh 12-yard line at the start of the four quarter. After three plays, Kansas City faced a fourth and two from the four. But rather than kick a chip-shot field goal to make it a one-score game, head coach Andy Reid decided to go for it, and a pass into the end zone intended for tight end Demetrius Harris was broken up by safety Sean Davis, who ripped the ball out of Harris’ hands just before he could get full possession.

When the Chiefs got the ball back, they made things interesting, when Smith found a wide-open De–Anthony Thomas, who alluded potential tackles by both Artie Burns and Mike Hilton, on the way to a 57-yard touchdown to make it 12-10 with 6:13 left in the final period.

Antonio Brown was the hero on Pittsburgh’s following drive, when he pulled in a tipped pass from Roethlisberger on third down and raced the rest of the way for a 51-yard touchdown and a 19-10 advantage for Pittsburgh with 3:24 remaining.

And following a quick three-and-out by the Steelers, Kansas City regained possession at its own 44, after a 32-yard punt return from the dangerous Tyreek Hill.

Just 1:42 remained, however, and the Steelers defense stiffened at its own 40. On third and 10, the veteran James Harrison sacked Smith for an eight-yard loss, and one play later, inside linebacker

For the day, Roethlisberger was 17 of 25 for 252 yards, one touchdown and one interception, while Brown pulled in eight catches for 155 yards and a score.

After allowing 231 rushing yards to Jacksonville in Week 5, the Steelers defense limited Kansas City to just 28 yards on the ground–including just 21 on nine carries by rookie sensation Kareem Hunt.

Next up for the Steelers is AFC North action, as the Bengals come to Heinz Field next Sunday afternoon at 4:25.