About 10 years ago, when Dan Kreider‘s best days were behind him, and Carey Davis took his place in the Steelers backfield, the fullback was seen as a dying breed in the NFL, a dinosaur on-par with the rotary phone.

True enough, while Davis did actually play the fullback position, he was known more as a receiver out of the backfield and a special teams ace, than as a true chauffeur for Fast Willie Parker, the team’s top tailback in the late-2000’s. One get the feeling that Arians designating Cary Davis as a “fullback” was more of a way of humoring factions within the Steelers organization that favored the fullback.

Cary Davis was gone by 2010, and the keys to the fullback position, when they weren’t collecting dust in some drawer on the South Side, were often handed off to tight end David Johnson, who certainly needed to find a way to make himself more useful while third on the depth chart behind Heath Miller and Matt Spaeth.

But more often than not, one-back sets were the norm on most plays, especially after all-world running back Le’Veon Bell became a star and the team’s workhorse in 2014.

This leads us to Roosevelt Nix, one of the Steelers 2014 Undrafted Rookie Free Agents out of Kent State, who played defensive line in college, tried to switch to linebacker in the pros, only to switch sides of the ball and become a fullback in-order to make his NFL dreams come true.

Rosie Nix made the Steelers in 2015; in two-plus years in Pittsburgh, he doesn’t have a  single carry to his name, with his only offensive contributions coming on a combined four receptions.

And he’s already started two games this season, as Pittsburgh is now opening up in more run-oriented alignments.

Obviously, one-back sets and hand-offs to Le’Veon Bell out of the shotgun formation are still very-much en-vogue in Todd Haley’s offense, but the sight of No. 45 acting as the chauffeur or bodyguard for No. 26 is becoming more and more familiar.

And, as I said before, Nix doesn’t seem to care about his number of carries or any other offensive stats, than the ones that belong to Bell and the other tailbacks he seems to love escorting on long runs downfield. 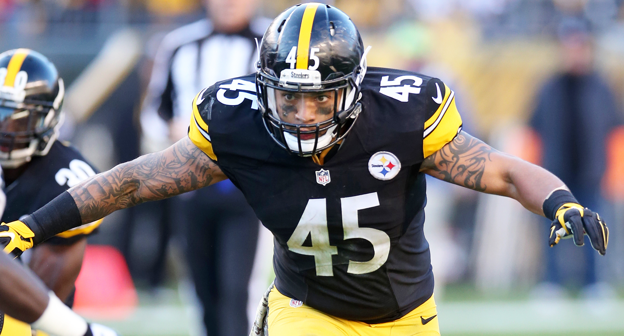 Take last Sunday’s Steelers win against the Bengals, for example, and how Rosie Nix seemed to make it his personal mission to protect Bell from the very dangerous and factually dirty linebacker, Vontaze Burfict, who began the game by kicking Nix in the facemask, but ended it with just four tackles and certainly didn’t do much to slow Bell down on his way to 134 yards rushing.

Unlike some previous match-ups against the Cincinnati Bengals, Bell ended the day healthy and ready to do battle again. With Ben Roethlisberger slowly taking a backseat to Le’Veon Bell as the main cog in the Steelers offensive attack, the latter’s health is of the utmost importance.

It’s nice to know he’ll have his own personal bodyguard in Roosevelt Nix protecting him on his and the team’s journey.