Taken from the gradebook of a teacher who has a note from his mother excusing his middle of the week absences from sickness here is the Pittsburgh Steelers Report Card for the win over the Bengals at Heinz Field. 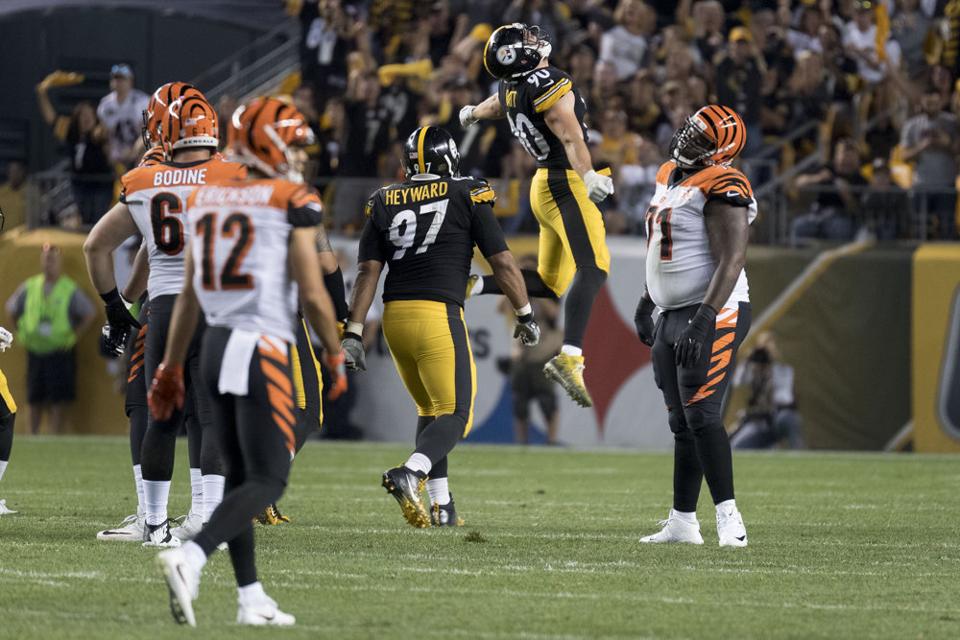 Quarterback
This was Ben Roethlisberger’s best game of the season thus far, as Roethlisberger led the Steelers to two touchdown drives, managed to work an number of receivers into the passing game and did not turn over the ball. Big Ben’s day could have been even better had two potential touchdown not been dropped. Still, the Steelers struggled on third downs, and Roethlisberger must bear partial responsibility. Grade: B

Running Backs
Is there any doubt that Le’Veon Bell is back into form? Le’Veon Bell attacked the NFL’s number 2 rushing defense head on, and fought his way to 134 yards on 34 carries. He also made noise in the running game with a brilliant stiff arm of Dre Kirkpatrick. James Conner carried 3 times for 19 yards, while Terrell Watson carried once for no gain. Roosevelt Nix paved the way. Grade: A

Tight Ends
Vance McDonald made two catches, including an impressive 28 yard catch. He also dropped a gimmie on the end zone. Overall however, his blocking was a key element to Bell’s success. Xavier Grimble also had one catch for 1 yards and blocked well when McDonald left via injury. Grade: B-

Wide Receivers
The Bengals have had a lot of success in containing Antonio Brown, but Brown did his damage in the first half with 4 catches for 65 yards including a touchdown. Still, the William Jackson put Steelers Nation on notice that AFC North as a corner that can go toe-to-toe with Brown.

JuJu Smith-Schuster had two catches for 39 yards including a touchdown. Eli Rogers reminded everyone why he’s still on the roster, while Martavis Bryant got everyone to ask “Just WHAT is he complaining about again?” Finally, Darrius Heyward-Bey caught what might have been the most important catch of the game on a fake field goal. Grade: B

Offensive Line
IF ESPN’s statistics are to be trusted, the Bengals only touched Ben Roethlisberger once. And while the offensive line wasn’t busying keeping Roethlisberger clean it was opening holes for Le’Veon Bell thanks to David DeCastro and Maurkice Pouncey’s pulling. This until established control at the line of scrimmage early on and never looked back. Grade: A

Defensive Line
Its some how fitting that Cam Heyward opened the Bengals final series with a sack, as the defensive line dominated the Bengals front seven from Cincinnati’s final possession of the first half onward. In addition to his sack, Heyward had two tackles for losses, and stopped several other Bengals for no gain. Perhaps most satisfying, late in the second quarter Heyward began punctuating his tackles with an extra backwards slam, and it was all down hill for Cincinnati after that.

Take out Joe Mixon’s 25 yard scamper, and the Steelers held the Bengals running backs to 2.8 yards rushing. That all starts up front. Grade: A-

Linebackers
Vince Williams had two tackles. Anthony Chickillo had a key pass defense. Bud Dupree and T.J. Watt both had sacks, while Ryan Shazier lead the team in tackles including one for a loss and was last seen chasing Andy Dalton in the backfield as the beleaguered Bengals signal caller opted to simply throw it away on 4th and two. A fine day by the linebackers. Grade: A- 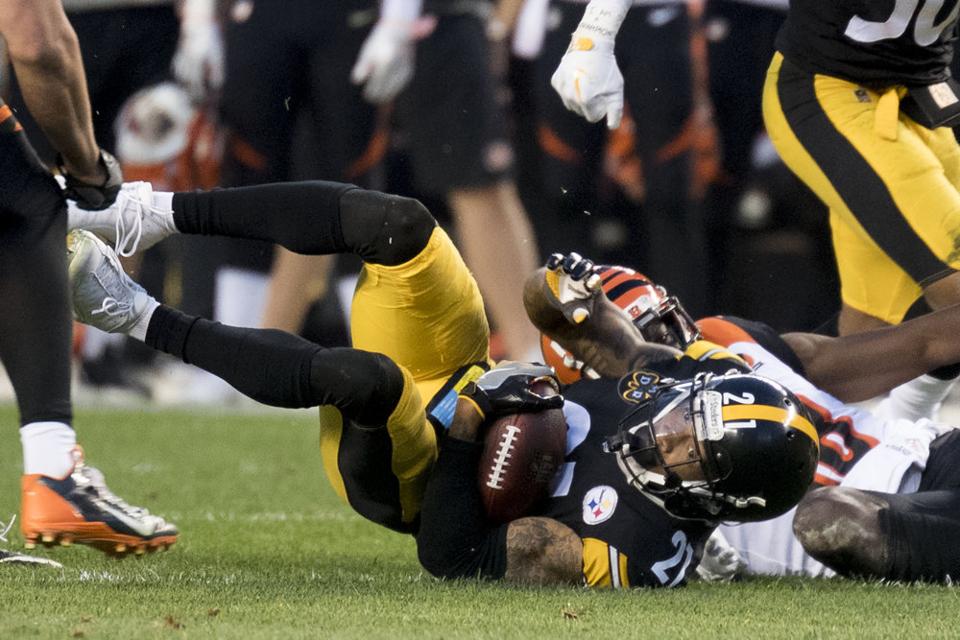 Secondary
Andy Dalton passed for 140 yards and the Bengals only managed 19 yards of total offense in the second half despite playing from behind the entire time. Oh, and Cincinnati finished 3-11 on third down conversions. Oh, and A.J. Green was held to 3 catches for 31 yards or 1 grab less than the Steelers secondary as Joe Haden and William Gay nabbed their first interceptions of the season. Grade: A

Special Teams
Chris Boswell boots it well against the Bengals, as he knocked in 5 field goals, including one from 41 yards away and another from 49 away. The Bengals did have one long punt return, which is the second week in a row the Steelers have allowed one.

The biggest play of course came on the hands of Robert Golden who connected with Darrius Heyward-Bey for the fake. That was a gutsy and risky call, but the Steelers executed it and it ended the game. Grade: B+

Coaching
Todd Haley did his homework on this one, expertly mixing the pass and the run to get the Steelers on the board early with touchdowns, and then controlling the clock after that – all against the NFL’s number 2 rush defense.

Objectivity commands us to remind ourselves and everyone else that the ease with which the Bengals scored their first two touchdowns was al little disquieting. You can be forgiven if you forgot because from the Bengals final drive of the first half onward, the Steelers defense dominated as thoroughly as any unit fielded by Bud Carson, George Perles, Dom Capers or Dick LeBeau ever fielded.

Cincinnati didn’t have a chance, and Andy Dalton’s final throw away on 4th and 2 in the 4th quarter perfectly symbolized the Bengals haplessness.

Mike Tomlin’s teams are sometimes prone to let down, and this was a possibility after a big win over the Kansas City Chiefs coupled with a Bengals team bringing a 2 game winning streak into Heinz Field on the heels of a bye week. But Mike Tomlin kept his team focused. And if his offense needs to improve in situational football and he does need to take care not to overwork his feature back, his Steelers put in a pretty good afternoon against the Bengals. Grade: B 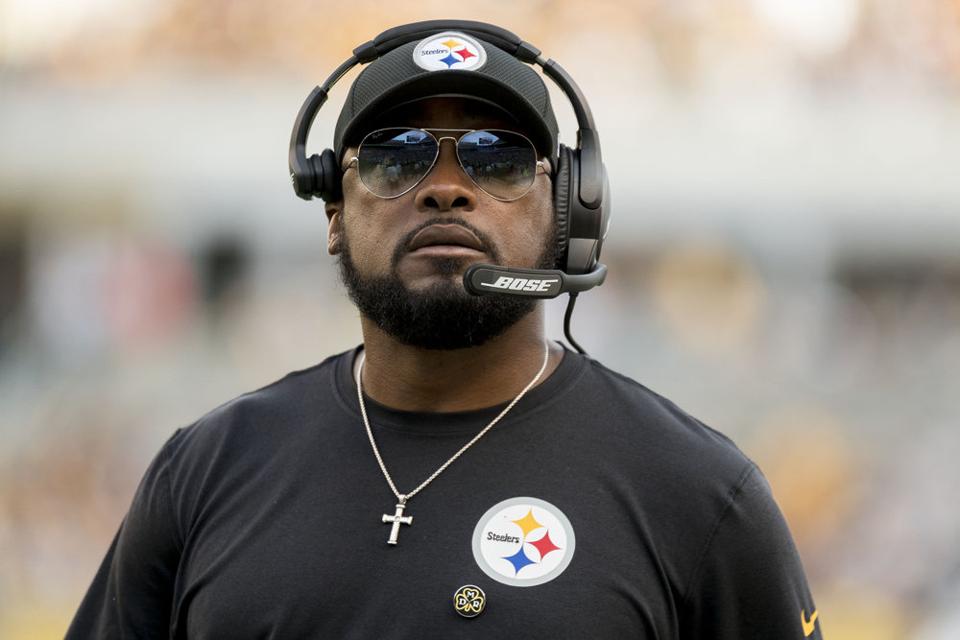 Unsung Hero Award
A year ago after the Steelers loss at Miami commentators trotted out various statistics of the Steelers records with Cam Heyward and without Stephon Tuitt in the lineup together.

But for as well as L.T. Walton, Ricardo Mathews and John Maxey might have played in Heyward’s absence, the Steelers brass went out and signed someone who could be a true 3rd defensive end in the rotation, and his name is Tyson Alualu and it was his playmaking as much as anyone else’s that lead to the defensive turn around and for that Tyson Alualu wins the Unsung Hero Award for the Steelers win over the Bengals.