The votes are in for the Steelers game ball winners for Pittsburgh’s 20-17 victory over the Colts and if the results aren’t necessarily a surprise, perhaps the margin of victory is. 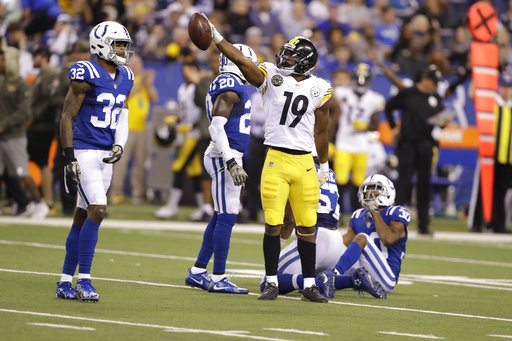 JuJu Smith-Schuster celebrates a 2nd half first down in the Steelers win over the Colts. Photo Credit: AP via News Sentinel

For yet another week, Steelers rookie wide reciever JuJu Smith-Schuster both led and dominated the voting, bringing down 12 votes which is 50% more than the next vote getter.

That’s some what of a mild surprise, as Ryan Shazier came in second, and Ryan Shazier’s game-changing interception even got a feature here by Tony Defeo, coverage which often times influences poll results. Stephon Tuitt was next drawing 6 votes.

Martavis Bryant got 4 votes, which isn’t a surprise given his 2 point and key 3rd down conversions, but Jordan Berry earned 4 votes on his own as a write in, which is impressive.

Vince Williams, who had a key tackle drew 2 votes while Sean Davis who led the team in tackles got one, as did Vance McDonald and Bud Dupree.

That is perhaps a mild surprise. Brown did not have his best game against the Colts by any measure, but he did come up with a critical 32 yard catch and run that put the Steelers into the Red Zone and allowed Chris Boswell to kick the game winning field goal.