The Pittsburgh Steelers and the Green Bay Packers are the NFL’s two most storied franchises. The latter defined winning and excellence in the 1960’s; the former defined the term “NFL Dynasty” in the 1970’s. Both franchises were fortunate to hit their respective peaks as the NFL was coming of age.

The Pittsburgh Steelers history vs the Green Bay Packers is pretty one-sided affair, with the Cheeseheads holding a 22-15 edge as of 2017, but much of that lopsidedness is due the the Steelers pre-Immaculate Reception Record.

In fact, in the last 25 years, the teams have only met seven times, but those meetings have contributed much to the lore of both franchises. Either scroll down to click on the links below to relive your favorite moment in Steelers-Packers history.

If you have a strong stomach for memories you’d rather forget, you can watch the game summary from NFL Prime Time.

For Steelers fans the significance of this game is in what Bill Cowher revealed about himself.

Near the end of the game Cowher approached Woodson. Rod turned away fearing a tongue lashing. Instead, Cowher consoled him, saying that “You’ve had a bad day at he office. When that happens, you don’t quit the job, you analyze what went wrong and bounce back.”

Steelers fans loved Cowher for his fire, brimstone and in your face bravado, but…

The Steelers playoff position was set, while the Packers still had something to play for. Bill Cowher benched many starters – Fred McAfee and Steve Avery were the Steelers starting backfield.

Yet this was a hard-fought, knock down drag out game. Kevin Greene hit Brett Favre so hard that he appeared to be coughing up his brains at one point. Jim McMahon did come in for a few snaps, but Favre refused to stay out long.

The Steelers second string almost pulled it off, as Yancey Thigpen dropped a sure touchdown pass as time expired.

Kordell Stewart and the entire Steelers offense had suffered and struggled under Ray Sherman’s offense all season. That seemed to change on Monday Night Football as Steelers amassed a 27-3 lead in the first three quarters. 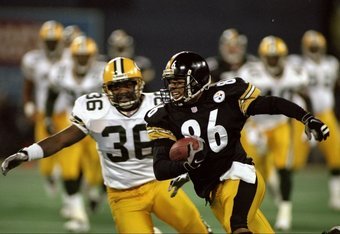 As the fourth quarter began, Pittsburgh appeared poised to make it 34-3, until Sherman decided to get cute on the goal line. Sherman thought it would be smart to revive Slash, and sent Mike Tomczak under center with Kordell lining up as a receiver. All went well, until the snap….

A bobbled exchange leads to a fumble, which Keith McKenzie returns 88 yards for a touchdown. The Packers score 17 unanswered points, but Pittsburgh holds on. Barley.

2005 – Never Underestimate the Importance to Backups….

Ben Roethlisberger is out, so is Jerome Bettis. Willie Parker suits up, but only lasts for 5 carries. But Bill Cowher a deep bull pen to fall back on. Charlie Batch starts, and while his numbers aren’t pretty, he avoids critical mistakes.

But the star of the day is Duce Staley, who gets his first carry of the year that day, and adds a total of 14 more for 76 yards and including a long run of 17 and a touchdown. He also catches to passes for nine yards.

The Steelers signed Duce Staley to a generous contract in 2004, and he only ended up playing 16 games over three season. But in the end, it was money well spent.

This installment of the Pittsburgh Steelers vs. the Packers had been billed as the battle of the defensive titans, as the two teams were leading the league in defense. To add an exclamation point, it pitted Dick LeBeau vs. Dom Capers, the two architects of the Steelers defense of the 1990’s.

The Steelers and Packers combined for 936 yards and the lead changed hands four times in the fourth quarter as Aaron Rodgers passed for 383 yards. Ben Roethlisberger did him better, however, passing for 503 yards and in doing so only becoming only the 10th NFL signal caller to break the half-century mark.

Hines Ward and Heath Miller both broke the 100 yard mark, but the star of the game was Steelers rookie of the year Mike Wallace. Wallace bookended his game with touchdown catches. Taking his first pass for 60 yards to the end zone, and he did it again with his last pass, hauling in a 19 yard grab with 0:03 seconds remaining.

2010 – Super Bowl XLV – Steelers Must Wait for Stairway to Seven…

And that brings us to Super Bowl XVL and the Steelers ill-fated quest for Lombardi Number Seven.

The men in Black and Gold fought back furiously and were alive until the game’s final minute. But, when the final gun sounded, the Packers simply showed themselves to be the better team and, to their credit, the Steelers acknowledged as much.

Like so many of the other games in recent Steelers-Packers history, this one went down to the wire. Although it seems laughable now, going into the game Mike Tomlin and the Steelers were forced to defend their decision to draft Le’Veon Bell over Eddie Lacy. 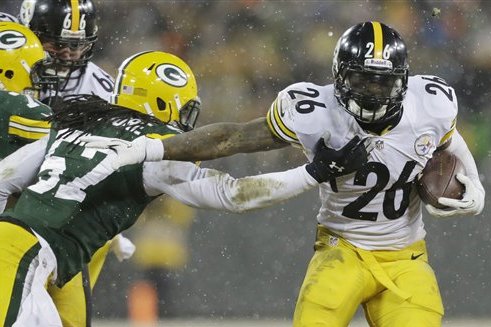 Le’Veon Bell played as if he took it personally, ripping off runs for 11, 5, and 22 yards in his first four carries. By half time, Bell had 71 yards and was in route to his first 100 yard game. But Bell’s game was hardly blemish free.

Eddie Lacy put Green Bay ahead, but Le’Veon Bell took his next carry and shot through the Packers defense for 25 yards. The fireworks were far from over at that point, as Cortez Allen intercepted Matt Flynn and took it to the house, only to see Green Bay return to tie the score after intercepting a failed Ben Roethlisberger pass to Heath Miller.

A monster return saw Green Bay return the ball all the way to the Pittsburgh’s 1, but penalties prevented the Packers from scoring as time ran out.

A hundred yard rusher, six changes in the lead, fumbles at the goal line and snow on Lambeau Field – as John Madden would say, “This is what the game of football is all about.”