Martavis Bryant’s outbursts, even if uncalled for, also appeared to at least indirectly lend credence to the “Ben’s too intent on forcing it to Brown story line” even if rookie JuJu Smith-Schuster was the target of his Instagram tirade.

While the Steelers offense has improve during the second quarter of the season, Ben to Brown remains its most potent combination, but do the numbers suggest that Ben is trying too hard to get the ball to Brown? Let’s take a look. 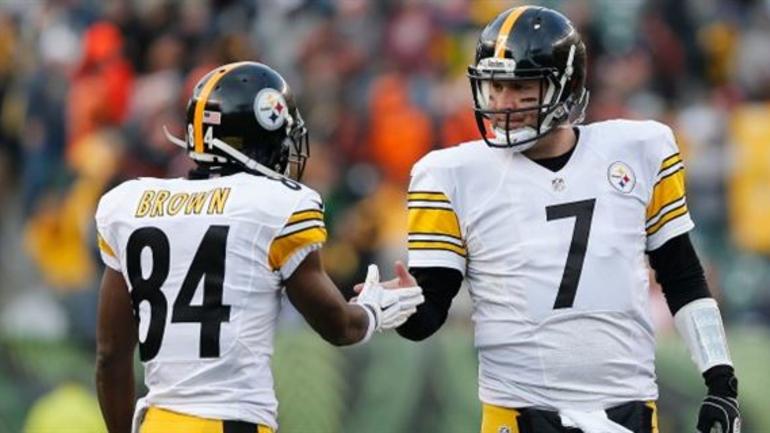 Does Ben Roethlisberger try too hard to force the ball to Antonio Brown? Find out below. Photo Credit: CBS Sports

Eight games gives you a good base of data to see what types of trends are developing during a football season. Sometimes a trend can rapidly reverse itself (think the Steelers anemic sack production during the first half of 2016 vs. the second half of 2016), but 8 games give you an idea of where things are heading.

Here’s how Ben Roethlisberger’s pass distribution has gone during the first 8 games of 2017:

Well, now the data really seems to make the case doesn’t it? Not only is Anotnio Brown Ben Roethlisberger’s top pass target, but he’s more than doubling the targets of the next guy below him, Le’Veon Bell. What’s more at 26% the combined total targets of his next two wide receivers, JuJu Smith-Schuster and Martavis Bryant, still fall 8 percentage points of Antonio Brown’s 34.1%.

Antonio Brown’s catches account for just shy of 40% of the Steelers receiving yards. The only player who remotely seems to have an argument that he should be the ball more is JuJu Smith-Schuster.

But before closing this case, perhaps its wise to take a look at how pass distribution broke down in 2016. Given the rash of injuries the Steelers experienced at wide receiver, and given the relative inexperience of the rest of the depth chart, its quite probable that Ben Roethlisberger targeted Antonio Brown even more, right?

Let’s see what the data tells us:

The data in fact tells us something else. Ben Roethlisberger targeted Antonio Brown far less in 2016 and Brown accounted for a much smaller slice of the Steelers receiving yards. This suggest that Brown was double and triple teamed a lot.

The Steelers 2016 season was abnormal in terms of injuries to the wide receiver corps. Let’s see what data from 2015 tells us which was more of a typical year.

That data from 2015 also helps us appreciate that an aging Heath Miller was still more productive than Jesse James in either his 2nd or 3rd year, although James is proving to be a fairly reliable target.

We can also see how much more dynamic Le’Veon Bell is as a pass catcher than DeAngelo Williams, although Williams did well when thrown the ball.

To complete the picture, let’s go back to 2014 to view Ben Roethlisberger’s ball distribution in the 1st year that the Steelers 4 Killer Bees played together:

2014 marks the first year (in this survey) that Brown’s target percentage from dipped below 30% (we should note that Landry Jones and Mike Vick threw a portion of those passes in ’15 and ’16.) It looks like it was Le’Veon Bell and Heath Miller who took those targets away from Bryant, although Markus Wheaton’s 14.1% is a healthier targeting percentage than any of the Steelers other receivers.

There are a lot of different takeaways from this data. Le’Veon Bell seems to be almost as reliable of a pass catcher as he was two years ago, although his yards after catch appear to be down. That could be due to the absence of Heath Miller’s and Matt Spaeth’s blocking, however.

Martavis Bryant, for all of his big play capability, he’s never been much more than a 50/50 catch to catch what’s thrown his way. Sammie Coates was clearly a dud down the stretch in 2016.