Taken from the grade book of a teacher who has crossed his fingers, hoping his students have finally “Got it,” here is the Pittsburgh Steelers Report Card for the win over the Titans.

Quarterback
Ben Roethlisberger was playing at home for the first time in close to a month, and he’s clearly more comfortable playing at Heinz Field. While Roethlisberger had an uneven first half, he recognized that challenged everyone including himself to step it up, and he was unstoppable in the second half, keeping drives alive, distributing the ball and throwing touchdowns in the Red Zone. For the night, Ben went 30 of 45 for 299 yards no turnovers and 4 touchdowns. Grade: A

Running Backs
Le’Veon Bell didn’t have much room to run, and the Steelers didn’t try to force feed him the ball. Bell was a force catching balls through the air, and helped set up manageable 2nd downs. James Conner ran a little before garbage time and didn’t find much room to run either, but looked OK late in the game. Grade: B

Tight Ends
Jesse James might never become a true number 1 tight end, but he’s proving to be a reliable target down field. While the tight ends much share some blame for the lack luster run blocking, James delivered as a receiver and added another touchdown catch to his resume. Grade: B

Wide Receivers
Antonio Brown had endured a couple of weeks where his production dropped and he was elispecd by JuJu Smith-Schuster. While murmurs of “Is 84 losing a step” hadn’t begun (and for good reason), Brown appeared to take it personally. Brown was clearly the Steelers number 1 reciever on the field catching 10 passes for 144 yards, including 3 touchdowns and one which was a work of pure wonder. JuJu Smith-Schuster had some nice catches, including a tough 3rd down conversion in the Red Zone. Martavis Bryant had a quieter night, but made a key third down conversion. He also recovered a fumble. Grade: A

Offensive Line
The Titans had more success getting to Ben Roethlisberger than any team thus far this season, but the Steelers line kept him clean in the 2nd half. The line’s run blocking left a little to be desired, but they were going up against a Dick LeBeau defense intent on making Roethlisberger beat them. He did, and the line helped. Grade: B-

Defensive Line
The Titans barely broke 50 yards rushing and averaged 2.5 yards on the ground, and that starts up front as the Steelers defenders dropped at least 10 Titan ball carriers behind the line of scrimmage, by ESPN’s count. Cam Heyward is playing at a level of dominance not seen since the days of the Steel Curtain, recording 2 sacks, 2.5 tackles for a loss and 3 QB hits. Stephon Tuitt wasn’t far behind, recording a sack and 2 QB hits. Javon Hargrave had 1 tackle for a loss. L.T. Walton had a sack late in the game. Grade: A

Linebackers
Ryan Shazier led the Steelers in tackles with 10 total, Vince Williams had a sack and T.J. Watt tipped a ball. Bud Dupree had part of a tackle behind the line of scrimmage. The linebacker helped shut down the run and get the defense off the field in the third down. Grade: B+

Mike Hilton returns on of four interceptions on the night during the Steelers Thrusday Night win over the Titans. Photo Credit: Chaz Palla, Tribune Review

Special Teams
It sure feels better to be the kick blocker rather than the kick blockee. Thanks to T.J. Watt, the Steelers blocked a Titan’s field goal early in the game, which helped ensure the Steelers lead. Antonio Brown returned two punts and averaged 11.6 yards, a refreshing change, and could have taken his last one farther had he not bumped into one of his own players. Chris Boswell was a perfect 4/4 on field goals and extra points. The Titans did have a long kick return and a decent punt return, neither of which had an impact but could have. Grade: A-

Coaching
Score one for Todd Haley. Haley was going up against a coach who knew his tendencies, his personnel and his way of thinking better than any other opposing defensive coordinator he’ll ever face. Yes, the Steelers used more no-huddle than normal, and Ben Roethlisberger’s comments suggest that he was doing more of his own play calling.

Keith Butler’s defense continues to evolve, and save for the first play of the second half, completely shut down the Titans in the last thirty minutes. Butler is blessed by an awesome defensive line, yet he needs to find a way to coax better play out of his secondary, especially if his starting corner and starting free safety are out as long as they’re expected to be out for.

Mike Tomlin appeared to anticipate that, warning people that the team remained a work in progress as opening day arrived. Tomlin knew his team, but more importantly, the Steelers have made slow but steady (if not always linear) improvement as the season has progressed.

While you always want to play your best football all the time, the truth is that finishing strong is more important that starting fast. The Pittsburgh Steelers still must sustain their progress during the season’s last 6 games, but week 10 saw Mike Tomlin getting his players to play their most complete game of the season, which is a very positive sign. Grade: A- 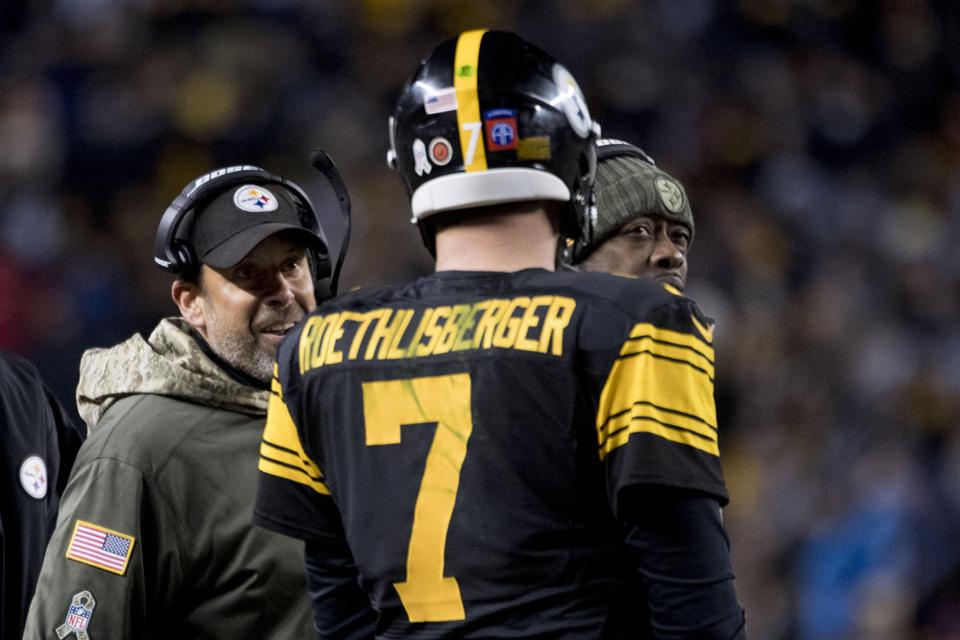 Unsung Hero Award
Just two weeks ago, the Pittsburgh Post-Gazette proclaimed him to be the focus of the Steelers offense. And for the better part of the last 12 months, that’s been undeniably true. But going into the game against the Titans, he knew focus was going to be off him, and he didn’t pout, didn’t complain on social media. Instead, he continued to make the bread and butter plays both on the ground and through the air that kept the Steelers offense humming.

He had what looked to be a really tough touchdown taken away on replay, and instead of demanding a second chance, accepted his role as a decoy in one of the best play fakes the Steelers have executed in living memory, paving away for a critical touchdown and for that Le’Veon Bell is the Unsung Hero of the Steelers Thursday Night win over the Titans.