Although it’s now nearly a year-round sport, the NFL regular season only consists of 16 games where each team runs about 130 offensive and defensive plays per game. In this age of fantasy football and meta-statistics, it is temping to assume that an NFL team’s final record boils down to the cumulative result of 2100 individual plays.

And, the lesson from the Titans game suggests the more equal moments can come in the locker room instead of on the field. 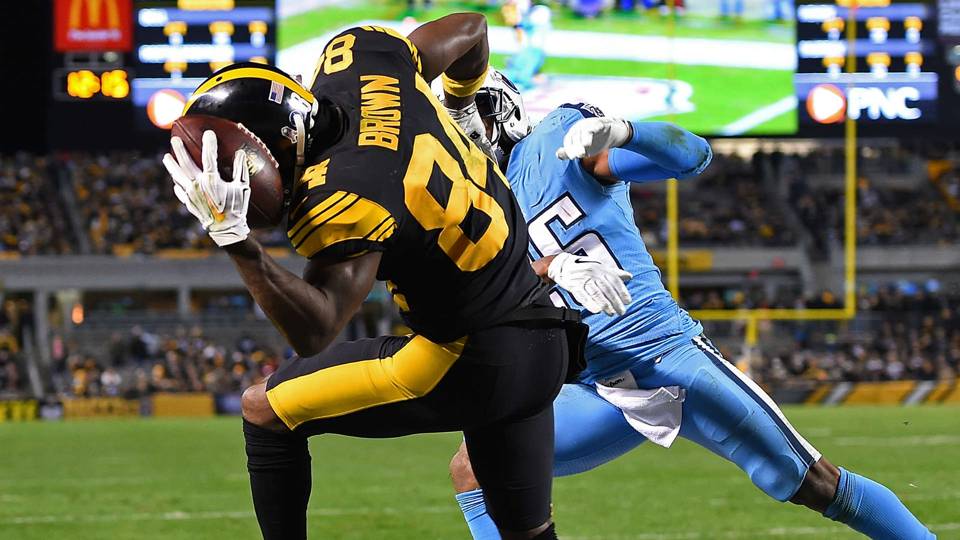 Antonio Brown does the impossible, again, in Steelers Thrusday Night win over the Titans. Photo Credit: Getty Images, via The Sporting News

SOS aka Same Old Steelers for One Half

Nine games into the 2017 season the template for the Pittsburgh Steelers was pretty well established. The Steelers offense might have its moments, but overall it would plod along, struggle on third downs, misfire on opportunities down field and settle for Chris Boswell field goals in the Red Zone.

This was particularly dangerous, because as Chris Adamaski of the Tribune-Review pointed out, the Titans actually represented the toughest late season challenge the Steelers have had since 2012. And not only were the Titans division leaders, but they were bringing Dick LeBeau, a man intimately familiar with the Steelers offensive system and personnel.

Sure, the Steelers started with some Ben Roethlisberger-to-Antonio Brown fireworks, but quickly thereafter muddled into offensive mediocrity.

While the Steelers were holding on to a 16 to 7 lead heading into the locker room at half time, they’d given every indication that second half would go down to the wire, like so many other contests this season.

Roethlisberger Speaks Up at Halftime

The press and fans alike enjoy talking about “Halftime adjustments.” Most people imagine NFL locker rooms at halftime filled with Knute Rockne like speeches. Steelers fans, at least those of a certain age, like to imagine most if not all half-time rallies are sparked by tirades like that of Greg Lloyd in 1993 where, in addition to breaking a chair, Lloyd explicitly called out the offense to do its part or get off the field.

And so it was at Heinz Field against the Titans. Ben Roethlisberger spoke up, but as he explained:

I didn’t go to individual guys, but I just felt like I wanted to challenge all of us, and I included myself in that. I felt like the defense did their job and more during the fist half. Obviously (the offense) started fast but fizzled out. I just challenged the guys that someone had to make a play for this team … or else we’re gonna keep relying on our defense. It’s time that we step up and do something, and I love the way they all responded.

The nine-point lead notwithstanding, the Steelers offensive play in the first half was “unacceptable” in the eyes of their veteran signal caller.

It would be poetic to write that a new Steelers team took the field and dominated after halftime. Except that didn’t happen. On the very first play in the first half, Marcus Mariota found Rishard Matthews out running Coty Sensabaugh deep down the middle. A missed Robert Golden tackle later and the Titans had just scored a 75 yard touchdown pass. 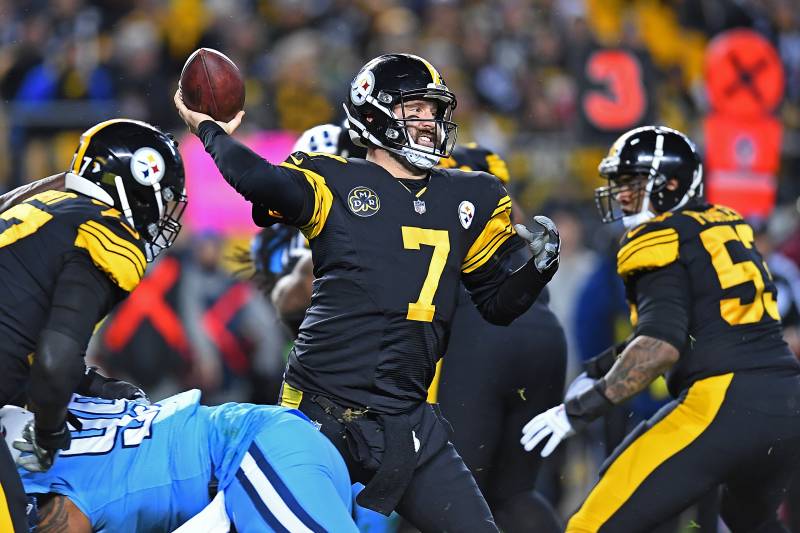 The Steelers offense took the field, and for the first time in perhaps the entire season, Steelers Nation saw something it hadn’t from its vaunted offense:

Roethlisberger answered the Titans quick strike by completing 7 of 9 passes, hitting Brown, Jesse James, Le’Veon Bell, and JuJu Smith-Schuster. The drive didn’t deliver the Daenerys Targaryen and her dragons type dominance that many expected out of the Steelers 2017 offense. Instead it was a methodical, 5 minute drive that ended with a 5 yard touchdown pass to Antonio Brown.

But the key word in the sentence above is “isolated.” Ben Roethlisberger and the the Steelers offense maintained that rhythm for the rest of the evening. Establishing that type of rhythm only comes with intense focus. Chuck Noll called it “Singleness of purpose,” and “singleness of purpose” translates into superior execution.

Nowhere was that superior execution more evident than in the Red Zone.

You can’t find a better example of focus and execution than that.

Steelers Defense Delivers, Albeit with Concerns

While Pittsburgh’s 40 point offensive explosion provides the key takeaway from the Thursday night Titans thumping, the offense didn’t operate in a vacuum.

Cam Heyward dominated as no Steelers defensive lineman has done since the days of the Steel Curtain. That’s not a statement one makes lightly, but Heyward abused Marcus Mariota all night, sacking him twice and hitting him 3 times when he wasn’t dropping Titan ball carriers in the backfield.

Stephon Tuitt, Vince Williams, and even L.T. Walton got into the sack party, making it miserable all around for Mariota. Robert Golden and Sean Davis added two to the Steelers interception total.

Those are all good things, but the Titans did score 17 points the third highest point total of the season. A more alarming statistic that you can attached to the number 3 is the number of long bomb touchdowns the Steelers defense has given up. The Steelers got burned for two against the Colts, and the Titans hit them with another.

With Joe Haden for a while and perhaps Mike Mitchell out for an extended peroid, this is not encouraging.

It took ten games, but finally, on Thursday night against the Titans, the Steelers offense finally lived up to expectations. The key of course, is to sustain this momentum through the next since games of the season and, God willing, into the playoffs.

But when asked if this was a breakout game, Ben Roethlisberger replied, “You can call it a breakout game in terms of points, but I still think that we will look at this and say ‘Man we still left things out.’”

That’s exactly the mindset the Steelers need to take out of this game.