Sometimes it’s simply best to fess up and admit you were wrong. So it is with me and the NFL’s decision to suspend JuJu Smith-Schuster.

Really, it didn’t make sense. But then the replay showed helmet-to-helmet contact, and then JuJu clearly looked to be making light over Vontaze Burfict. That didn’t sit well, and in my post-game write up I came down hard on JuJu and on Rebecca Rollett’s site, Going Deep with the Steelers I observed, “JuJu Smith-Schuster was (rightly in my view) suspended for gloating over Vontaze Burfict…”

Several factors influenced my change in thinking, which I expand below. 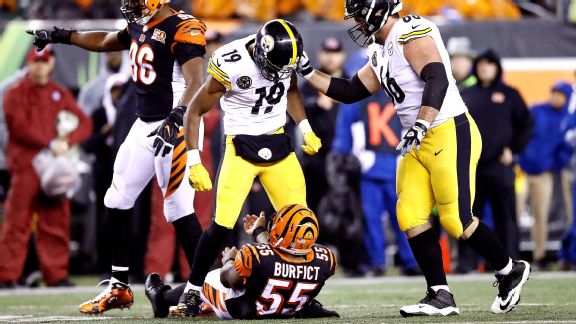 Taunting is Wrong, but Is It Suspendable Offense + Vontaze Burfict Took a Dive

In taking JuJu Smith-Schuster to task put his actions into the context of what we know today as opposed to yesteryearWhen I saw Greg Lloyd 3 count Al Toon after Thomas Everett knocked the Jets wide receiver out with a concussion during the 1989 Steelers shut out over the Jets I thought it was awesome.

Given that, JuJu’s taunting of a seemingly concussed Burfict, while satisfying on one level is nonetheless wrong on so many others. But as Mike Silverstien, aka “Homer J” reprimanded:

No question Juju deserved 15 for taunting, but NO PLAYER IN NFL HISTORY HAS EVER BEEN SUSPENDED FOR TAUNTING. You throw the flag, give him 15, lighten his wallet and move on, damn it.

There no arguing with that logic, and while the NFL mentioned the taunting in its letter to JuJu it apparently clarified that the suspension was for the hit, not the taunting. Even Jason Witlock and Colin Cowherd, two jouralists not exactly known for their support of the Steelers, went at pains to say that the hit only borderline illegal.

But of course, it was a devastating hit, wasn’t it? Well, again Homer J’s analysis is instructive:

Juju clocks Burfict and lays him flat. Burfuct [sic] at first springs up, and he tries to twist and grab Juju’s legs. Then the flags start flying and Burfict flops like some damned Serbian midfielder in a match against hated Croatia. Just like he falls to the ground game after game during other team’s offensive drives. Just like he said Antonio Brown did in the playoff game two years ago. (So it wasn’t something he hadn’t thought about) He laid there like a slug. And they strapped him to the gurney and took him to the field hospital where the Civil War surgeons were ready to amputate his leg or something. But, wait! According to media reports, the second he got into the tunnel and away from cameras, the SOB demanded to be unhooked, and he jumped up and started to head back onto the field. He was faking it!

As no one disputes the press accounts that Burfict did in fact get off the cart after it was out of camera view, one must assume he did just that. And Homer’s analysis makes a lot more sense in that light.

NFL Has 1 Standard for Juju Smith-Schuster, Another for Ilokia and Gronk

When the news broke that the NFL had suspended Juju Smith-Schuster and while also suspending George Ilokia for his hit on Antonio Brown, the league at least looked to be trying to keep up the appearance of objectivity.
Never mind that Ilokia had a lot more opportunity to avoid hitting Brown’s head that JuJu had with Burfict.

Sorry, no amount of sophistry can justify this, although Ilokia’s agent tried suggesting that Brown should have positioned his head differently.

I suppose JuJu’s agent should have tried the same argument with respect to Burfict. Except unlike Brown, Burfict didn’t have to worry concentrating to hold on to the ball as he was probably calculating whether he could injure Le’Veon Bell again.

Tony Defeo has already written about the NFL’s hypocrisy here and taken the argument further by contrasting the 1 game suspension that JuJu Smith-Schuster got for unintentional yet a (borderline) illegal hit, where as Patriots pretty boy Rob Gronkowski clearly pre-meditated, almost pro-wrestling style elbow to the back of the head of Bills defenseless defensive back Tre’Davious White.

Go read Tony’s full article, we need not rehash it here, but Defeo’s argument also played a role in shifting my thinking.

Where’s the Suspension for Ahmad Brooks Hit on Antonio Brown??

And that brings us to the third factor that shifted my thinking.

What’s that you ask, I don’t remember anything like that from the Packer’s game? Well, I missed it too, but it came on Martavis Bryant’s ill-fated end around at the goal line. What Brown has David DeCastro passes him by:

Gee, isn’t that interesting? Not only was Brown hitting hit from almost the same position that Burfict was standing in, unlike JuJu Smith-Schuster, Ahmad Brooks was clearly aiming at Antonio Brown’s head. This play also came on a nationally televised game, and yet, the only discussion of it came thanks the discussion board on Jim Wexell’s Steel City Insider in response to observations made by Craig Wolfley.

Which shouldn’t matter, should it? The NFL is supposed to review all game tapes and look for offenses like this, aren’t they? That doesn’t seem to be the case, as Jim Wexell suggested on Twitter:

It’s almost like these idiots in the league office base their punishment off what Jon Gruden spits out during a game, right or wrong. @TroyVincent23 @nflcommish

And that’s what’s so galling about the JuJu Smith-Schuster suspension. On paper the NFL has appeared to take strides towards injecting some objectivity into its administration of justice. But as the old adage goes, “Character is what you do when no one else is looking.” The calculus for understanding why JuJu’s punishment is so harsh is simple:

No one saw Ahmad Brooks illegal hit on Brown, so it Goodell saw no reason to do anything. Iloka George didn’t taunt and Brown didn’t get taken out on a stretcher, so his suspension can be reduced to a fine.

As for Ron Gronkowski? Well, he’s a Patriot and the one time Goodell tried to get tough on them he overcompensated, and it backfired. So Goodell’s back in his comfort zone of looking the other way when his buddy Bob Kraft is involved.

Let’s repeat something this site has mentioned before and will again:

Football will only survive if the risk of CTE is eliminated or greatly reduced. But arbitrary administration of justice, whether that be giving protection to Tom Brady and Peyton Manning but not Ben Roethlisberger, or trying to make James Harrison a scapegoat, simply erodes the integrity of the game, without touching the threat of CTE.

And that’s why I’ve changed my mind. Apologies to readers for the error of my ways. #FreeJuJu!