It’s been a long time, too long in fact, since the Watch Tower shined its lights, but that’s a product of the digital economy’s never-ending work day and certainly not for lack of Steelers related news to analyze.

With acknowledged, this edition of the Watch Tower turns its focus on stories about Ben Roethlisberger, the Martavis Bryant non-trade, Dick LeBeau’s return to Heinz Field, comings & goings, localization pains and much more.

The fact that all eyes have been on Ben Roethlisberger should come as no surprise this season, given that Roethlisberger openly mused about retirement following yet another AFC Championship loss to the Patriots.

Lots have been said about Big Ben and his future plans, or lack thereof, but ESPN’s Hallie Grossman added a lot of substance to the conversation in her 3,000 plus word story on the Steelers signal caller (a story which came to the Watch Tower’s attention quite by accident – more on that below.)

She of course raised the question with Roethlisberger, who claimed not to know, and intimated that it may very well be the case that no one but himself know when he decides to make his final trek down the tunnel at Heinz Field.

She does, however, reveal that Ben Roethlisberger not only has his two locker, but also has his own private room, or vestibule. While that’s hardly earth shattering, it is an interesting factoid and one that the Watch Tower is unaware of the local press publishing.

Hallie Grossman’s story is certainly strong enough to win Watch Tower kudos, but the Watch Tower will also openly wonder why these stories tend to come out of the national media.

Its doubtful that Burt Lauren and the Steelers PR team, will ever read this, let alone be persuaded to change policy because of it, but if the Watch Tower’s assumption is correct, then let’s state for the record that Pittsburgh-based reporters covering the Steelers should get an equal shot at the access needed to draft these in-depth stories.

During the Steelers 31-28 win over the Green Bay Packers Steelers quarterback coach Randy Fichtner was seen on the sidelines conferring with Ben Roethlisberger. That didn’t seem all that unusual, until this tweet from Mark Kaboly appeared.

Steelers were contemplating moving Todd Haley to the booth but decided against it. They were on the right path … https://t.co/wLFtjmmXB8

As it turns out, this was a rather new sight, given that four games ago Randy Fichtner moved from the booth to the sidelines. The fact that Ben Roethlisberger struggled early in the season, long before his 5 interception performance against Jacksonville, is not news. Nor were there a lack of stories attempting to explaining why (most/many of which focusing on Roethlisberger not practicing Wednesdays.)

But The Athletic’s Mark Kaboly zeroed in on one concrete move that the Steelers have made to address the situation. The bulk of Kaboly’s article was behind The Athletic’s paywall, and therefore the Watch Tower analysis is necessarily superficial.

Randy Fichtner moving from the booth to the sideline is a change that came in plain sight, but Mark Kaboly is the first reporter to pick up and report on the change, and Kaboly wins Watch Tower kudos.

Martavis Bryant trade story has faded for the moment, but the way it all unfolded did yield useful insight into how agents work the PR levers. When national reporters broke the Bryant trade rumor request story, several Pittsburgh-based writers reacted with skepticism. Dale Lolley, then still with the Observer Reporter, response is fairly typical:

A couple of national reporters are saying that Martavis Bryant has requested a trade from the Steelers and did so a couple of weeks ago. I don’t know if I’m buying that one.

However, within in a day or so, the Pittsburgh Post Gazette’s Ed Bouchette and other members of the Steelers press corps were confirming that Bryant and/or his representatives had in fact made the trade request.

Lolley himself took time out to explain how the process worked, comparing Bryant’s case to that of 49er’s linebacker Navarro Bowman, detailing how agents work behind the scenes. Agents, are in fact prime sources for stories about impending personnel moves and are typically the man standing behind the curtain when you see a “league source” cited. 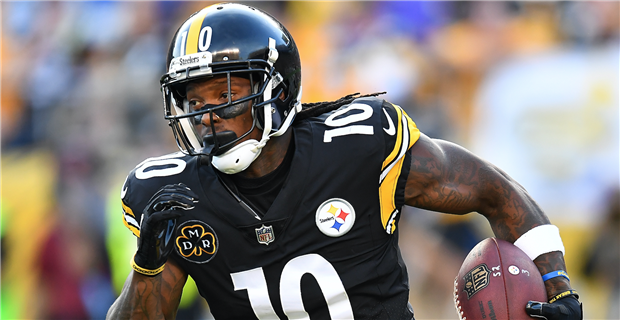 And, taking a longer look, it occurs to the Watch Tower that the rule of thumb for agents is perhaps, “To get your guy out of town, leak to national reporters. To get him into town, leak to the local press.”

A good example of the latter would come from way back in spring of 2008, when a visit from free agent Anthony “Bud” McFarland prompted erroneous reports that the Steelers had signed him, followed by a stream of columns by then Tribune-Review editor John Harris that sang the defensive lineman’s praises week’s after his visit to the South Side an suggested that the Steelers sign him.

It didn’t occur to the Watch Tower then that those Harris stories were probably prompted by calls from an agent.

The Steelers press corps has seen two big changes this season. First, Mark Kaboly jumped from local upstart DK on Pittsburgh Sports to accept an offer as the Steelers beat writer for the national upstart The Athletic. Kaboly had been with Dejan Kovacevic team for about a year, and the move marks the second hit that the Athletic DK on Pittsburgh Sports has taken at the hands of The Athletic.

As the Watch Tower observed previously, this type of movement is relatively new inside the Pittsburgh sports writing community. Back in 2009, when doing the research for the retrospective series on the 1989 Steelers, one of the things that stood out was that so many of the writers who’d covered Bubby Brister & co’s 15 Minutes of Fame were still covering the Steelers two decades later for the same publicationsm.

That is changing fast. DK on Pittsburgh Sports digital only, subscription-based model represented a major innovation in sports journalism in the Pittsburgh market and one side effect of that is that it seems to have spurred a lot of movement for journalists, (although that’s probably not what Kovacevic intended when he launched his site.)

Digital disruption comes with costs of course, and the thinned out Steelers staff at the Pittsburgh Tribune-Review can attest.

People who travel outside the United States are often surprised to find messages like the one below on the video screens of their favorite sports, news and/or entertainment websites: 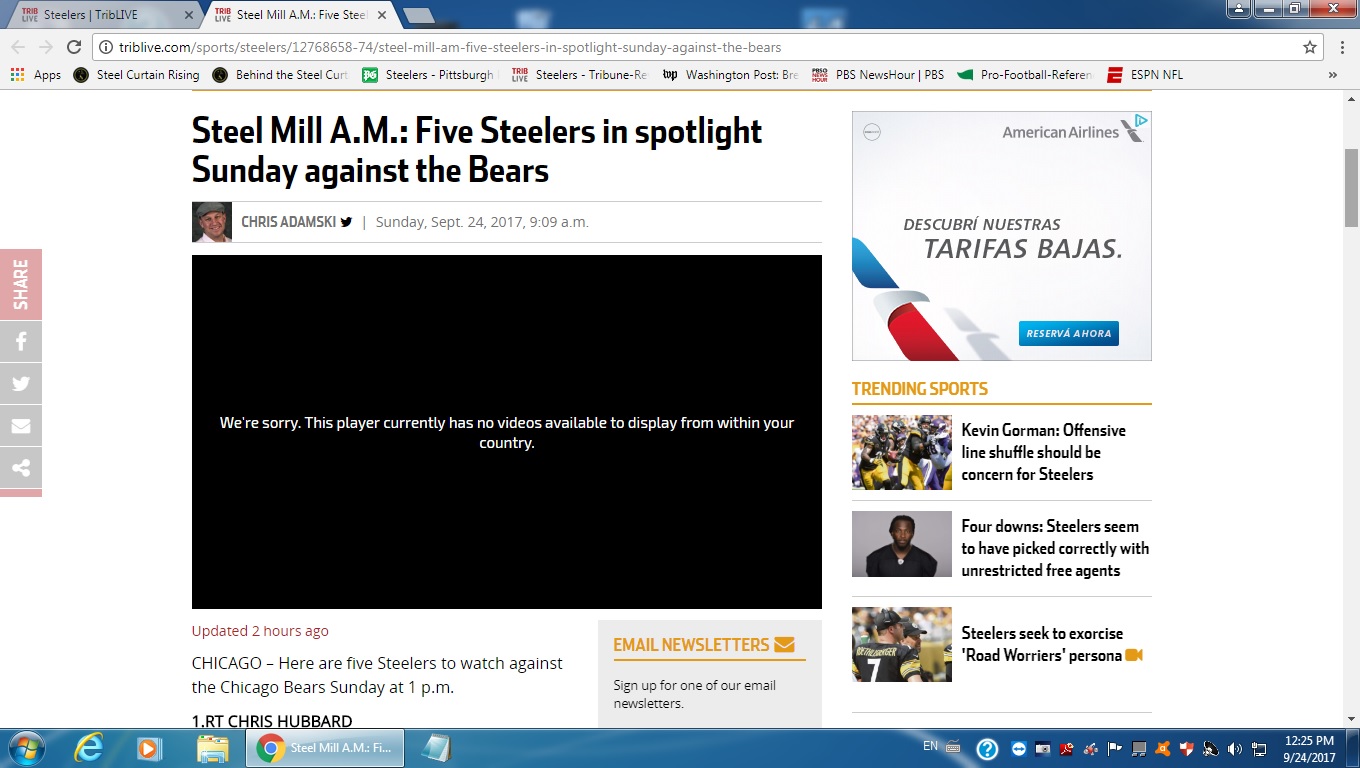 This is nothing new and is driven by copyright (or lack thereof considerations.) In fact, the messages are becoming more common. There are no shortage of commercial sites (including Steelers.com) which won’t let you place on-line orders from abroad, even if you have a US-based credit card.

ESPN has sunk to a new level. ESPN of course has sub-brands throughout Latin America. As you’d expect ESPNDeportes broadcasts in Spanish and focuses on soccer, tennis, golf and everything else which is popular locally (although they do carry the Sunday and Monday Night Games).

But for 16 years, if you were in Argentina you could simply navigate to espn.go.com/nfl/ just as you would in the United States and read as you normally would (although some videos might be blacked out.)

Try that now and this is what you’ll get:

In Latin America (or Argentina at least) ESPN.com isn’t accessible in English

That’s right! Try to access any of ESPN’s NFL related pages in English, and you’ll get automatically redirected to www.espn.com.ar/futbol-americano/ complete with local soccer scores across the top bar, whether you want to see them or not!

You can still access English articles via the writer’s Twitter feed or Google, although if you do so from a mobile device such as an iPad you’re liable to be kicked to the Spanish site when the browser auto-renews.

From a desk top you CAN manage to get the ESPN.com’s NFL page by navigating to ESPN’s Hockey coverage, and then clicking back to the NFL coverage, but that’s a royal pain in the ass. After 16 years of living in Argentina, I can certainly read Spanish, but gee, I do prefer to read about the NFL in English and detest having the option taken denied to me.

Note to ESPN, I was on espn.go.com/nfl/ a heck of a lot more than I ever tuned into ESPNDeportes. If you actively try to lose my attention, there’s no way your sponsors can get my dollars.

There you go. Won’t change anything but sure felt better.

New, but Juicy Tidbit on the LeBeau-Steelers Story

Did you know that the Steelers tried to kick Dick LeBeau upstairs before they promoted Keith Butler to defensive coordinator? They did, and Jim Wexell broke that fact prior to the Steelers Titans game.

When readers, including this one, pressed him for more detail, Wexell suggested that this was common knowledge (its not) but confirmed that LeBeau wasn’t interested in even opening that conversation.

While he didn’t break the news, when the LeBeau story was still hot Wexell provided details that other uncovered, and continues to do so over 2 years after its become history.